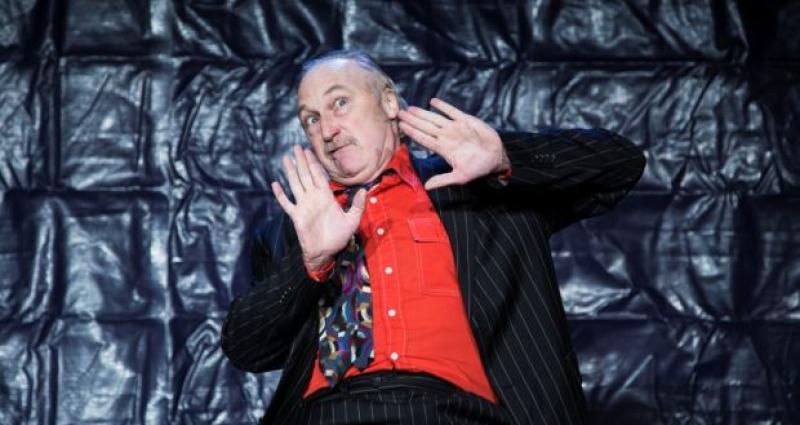 A one man play charting the financial underhandedness of 1980s Dublin that would eventually spawn the Celtic Tiger will return to Derry this weekend 30 years after it’s inauspicious debut here.

‘Bat the Father Rabbit the Son’, is a solo performance by Dublin actor Donal O'Kelly.

In the 1980s the character of Rabbit, a self-made haulage magnate, is neck deep in the sort of 'brown envelope' deals that would in the following decade would perhaps redefine the word 'tribunal'.

The problem is that Rabbit is haunted by the spirit of his father Bat-a volunteer in James Connolly's Irish Citizen Army and who fought in the Easter Rising of 1916. Bat's ghost also has the power to return take over his son's body at will.

So, Rabbit faces a continual battle between the monetary rewards of the burgeoning capitalism of the 1980s and the devout socialist principles fought for by his father around seventy years previously.

O'Kelly has written and performed a series of one man plays that have included the award winning Catalpa and Jimmy Joyced! His other plays have been The Dogs, Hughie On The Wires, The Business Of Blood, Farawayan, Asylum! Asylum!, Mamie Sighs, Judas of the Gallarus and The Hand.

However, the actor is probably most recogniseable as Brendan 'Bimbo' Reeves in the 1996 film adaptation of Roddy Doyle's The Van.

‘Bat the Father Rabbit the Son’ will be performed this Saturday, March 1 at the Playhouse on Artillery Street. And, those attending the performance will witness the struggle between father and son in the past and the present and also between imagination and reality.

However, this is not the first time that the play has been staged in Derry.

Donal O'Kelly told the Derry News: "The play first went on in the Mansion House in Dublin as part of the 1988 Dublin Theatre Festival and it then went onto the Irish Arts Centre in New York where it was a huge hit and then onto the Riverside Theatre in London.

"I was then contacted by a group called 20:20 Vision who were marking the twentieth anniversary of the arrival of the British Army in Northern Ireland. So, I brought the play to a festival they organised in Derry in August, 1989.

"I performed it in the upstairs part of the Savoy Bar. But, as soon as I started the bar was circled by two armoured cars with their sirens blaring. It was the loudest show I ever did and I had to roar non-stop for more than twenty minutes. But, the experience developed a set of vocal chords that have served me well in the thirty years since.

"Then, the following spring I was invited to perform it in the Foyle Arts Festival. It ran at the Foyle Arts Centre for three nights. On the last night there was a bomb scare outside the Strand Road RUC barracks. It was declared a hoax about 8pm when the show was due to start. I thought no-one would turn up, but to my astonishment a full house streamed up the pathway to the centre.

"Among the crowd was Brian Friel. My lighting operator presumed the show was cancelled and didn't show up. Once I saw the maestro going into the auditorium. I knew I had to do whatever it took to get the show on.

"I had to fade the lights myself as I went onstage, using my forearm. The lights went up full and made the stage like a sauna. At the end, one of the punters, a tall, earnest-looking guy, came up to me and said, "I've been in jail with some of the hardest men I know, but I've never seen a man sweat through a suit before."

In an attempt to get free of his dead father's ghost Rabbit makes a pact with his assistant Keogh, promising him if the series of mad cap spiritual remedies are effective within a year he will hand the successful haulage business over to him.

Without giving anything away, the crazed boat voyage out of Howth and up the River Liffey has been described as one of the strongest dramatic conclusions ever seen on stage.

Whilst this play is rooted in the 1980s, the boom and bust economic spirals of the Republic in the last 15 years however have ensured that its core themes still very much resonate to this day.

Donal O'Kelly said: "I brought it back because of that very reason. If anything the grab-all mentality that began in the 1980s if anything, is worse now."

"The legacy of 1916 is a part of what we are. The character of Bat keeps bubbling up to the surface. I haven't changed the play to fit into the 1990s or 2000s because it still has the same underlying message it had in the 1980s-it's kind of obvious."

Tickets for 'Bat the Father Rabbit the Son' are priced at £12 and £10 (concession) and can be bought at the Playhouse Box Office in person or by calling 02871 268027 or online at https://www.derryplayhouse.co.uk/content/booking/8. Please note it is recommended that children under 12 should not attend as some strong language is contained in the dialogue.

CAPTION: Actor Donal O'Kelly will perform 'Bat the Father Rabbit the Son' this weekend in Derry, for the first time in thirty-years.
ADVERTISEMENT - CONTINUE READING BELOW