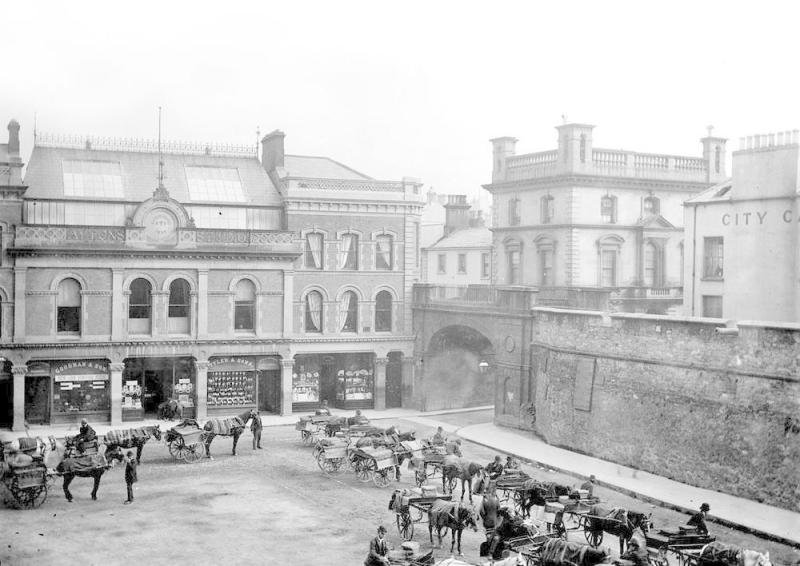 While most of the earliest surviving photographs taken in Ireland date from the 1840s, the vast majority of historically important images held in public collections date from the 1860s onwards.

In this era, Ireland as most other western countries was beginning to become gripped by photographic mania. By 1870, there were over 70 commercial studios in Dublin and 15 in Belfast.

However, Derry too had its share of professional commercial photographers-two of which in particular are worth a mention. One of them later became the first professional photographer in Ireland to have his work used as court evidence.

They are both buried in Derry City Cemetery.

Alexander Ayton Senior was born in 1829 at Denny, Stirlingshire in Scotland. He was one of seven children of his mother Helen Bowie and father Alexander Ayton.

Ayton first moved to Enniskillen in 1857 where he married Catherine Young, a woman from his own town in Scotland.

In the year of the birth of their first child, Alexander and Catherine Ayton moved to Derry and opened the city’s first photographic studio at Huffington’s Crescent off Hawkin’s Street in the Fountain area.

Derry’s photographic pioneer had become successful enough by 1864 that he had a purposely built studio erected at Kennedy Place. Such was the grandeur of the premises that the local press commented on the fact that its showroom boasted 1,000 portraits hanging on its walls as well as views of the city.

The building itself continued to have a unique place in the history of Derry after the Ayton family had departed it.

Between 1930-48 the house at Kennedy Place was the city’s Jewish Synagogue and after that was the home for decades to follow of the Ulster Unionist Party.

Alexander Ayton’s success kept on coming. Buoyed by the continuing fascination for family portraits and the desire of wealthy Victorian merchants in the city to adorn their walls with images of their own commercial success and the growing cityscape.

The financial success of the business was probably fortunate in more ways than one. This was because between 1859 and 1876,  Mrs Catherine Ayton had 12 children.

In fact, so great was Ayton’s success that by 1884 the business shifted again to even grander premises at Shipquay Street and he even opened a second premises at Carlisle Road.

Alexander Ayton passed away in 1900 and at his death, four of the children and their mother were still living in the Fountain premises.

However, up until 1894 the Edinburgh studio had been run by Alexander Ayton  Junior who had opened it at 1 Hanover Street in the Scottish capital in 1875. It later moved to North Bruntsfield Place where it remained in operation until 1940-a full 81 years after his father, Alexander Ayton Senior had first set up in Derry.

Ayton Jnr, another photographer of note, became a member of the Edinburgh Photographic Society in 1892. Reports of his death in 1894, at the young age of 35 said that he had shown no signs of ill health and was preparing to go on holiday in the Highlands when he passed away.

He had been appointed as President of the Edinburgh Photographic Society in the year he died.

James Glass was born in Donegal in 1847 and established his first business as a portrait and landscape photographer in the city in 1875 at 65 Carlisle Road. By the 1890s he had several studios across the city.

In keeping with the photographic trends and fashions of the late 19th century, Glass' work largely concentrated on portraits.

However, James Glass also produced outdoor photography specialising in enlargements which were finished in crayon, oil and watercolor as well as transferring photos onto porcelain.

In the late 1870s, Glass travelled into the Gweedore area of Donegal to take a series of photographs recording life in the region. The reason for this trip was unclear. But, it is unlikely he undertook it without being commissioned because the region was remote, difficult to get to and was an Irish speaking area-Glass did not speak Gaelic.

Furthermore, the process that Glass used to produce his images needed a portable darkroom, fragile equipment and a range of chemicals.

It is possible therefore that James Glass was paid by a charity to record life in the area. Throughout his own life Glass had a great concern for the poverty and destitution in the region which at the time of his visit there had threatened the return of the famine conditions that had gripped Ireland in the mid 1840s-the era of his birth.

Whatever the reason for his trip to Gweedore the 'Glass Album'-a series of 24 images remains a unique record of the region in the era.

However, this was not James Glass' last direct association with west Donegal. The reason behind his return to the area a decade after his first commission was much more clear.

Fr James McFadden, a leading figure in the Land Wars of the time, and 23 others were charged with the policeman's murder. Glass was commissioned by the defence to take a series of pictures of the area again depicting the dire living conditions.

It became the first occasion that photographic evidence was ever used in an Irish court.

The murder case, due in no small part to the fact the accused was a Catholic priest, was reported in the New York Times and was also a topic of discussion amongst MPs at Westminster.

An island wide recession in the era meant that tenants who worked the land found it nearly impossible to pay their rent and it resulted in the eviction of hundreds of families from their homes.

Tenants resisted the evictions and violent attacks on landlords, their agents and the police who enforced the evictions became common. Irish Republican Brotherhood member Michael Davitt, also a MP, founded the Irish National Land League in October 1879 in a bid to agitate for tenants rights.

In Donegal parish of Gweedore, Fr McFadden encouraged people to become involved in the Land League, but when he ignored a court summons to appear at Bunbeg Court on charges of conspiracy a warrant for his arrest was issued.

Then, on February 3, 1889 District Inspector William Martin and a group of RIC constables turned up at Derrybeg chapel to enforce the warrant.

A scuffle broke out and it was alleged that Inspector Martin drew his sword and charged at the priest. During the fracas the senior police officer was killed and Fr McFadden and some of his parishioners were arrested and first brought to Derry before being taken to Lifford where their prosecution was granted.

On October 17, 1889 the trial duly began Maryborough, Co Laois and James Glass was commissioned to take pictures of the area of the murder in Gweedore.

Fr McFadden pleaded guilty to obstructing police and was released on personal bail.

Those charged with the murder of Inspector Martin pleaded guilty to manslaughter. One man was acquitted with the remaining accused being sentenced to between six months hard labour and ten years penal servitude. All of the men were finally released in 1982.

When James Glass died in 1931, news of his passing was carried in Derry's newspapers.

One such entry read: "The news of the death of Mr James Glass, Carlisle Road, Londonderry, which took place yesterday morning, will be received with sincere sorrow by the citizens, by all of whom he was held in highest esteem.

"A native of Letterkenny, he accompanied his father to Londonderry seventy years ago, and some years afterwards he entered the service of the late Mr Alex. Ayton as an apprentice to his photographic art.

"Later he opened a studio of his own, and for many years has been recognised as being in the forefront of his art. He was a man of wonderful virility, which he retained until a few weeks ago, when he took the illness which has proved fatal.

"He had been a lifelong member of Carlisle Road Presbyterian Church, and from his earliest days took a keen and active interest in its work.

"He was for a time superintendent of the Sabbath school, and for over half-a-century he was a member of session. He supported generously its numerous funds, and as a ruling elder took a keen, sympathetic and practical interest in those in his district.

"He was one of the oldest members of the Londonderry Y.M.C.A. , the Derry Temperance Council and the Good Templar Order.

"Deep sympathy will be extended to his widow and two daughters."

CAPTION: An image of the Ayton Studios at the edge of Guildhall Square in Derry.
ADVERTISEMENT - CONTINUE READING BELOW