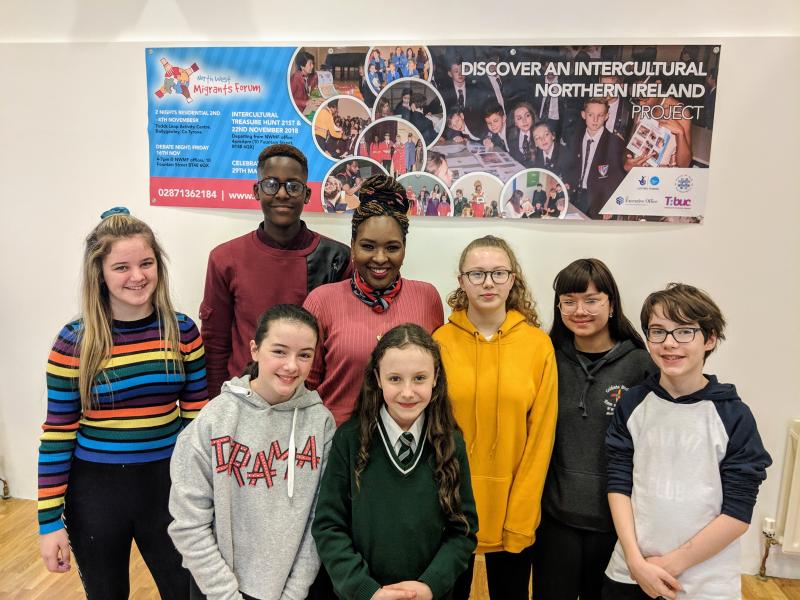 The founder of the North West Migrants Forum in Derry believes that local schools need to modernise and “wake up to the reality” that Northern Ireland is fast becoming a “global nation”. Lilian Seenoi-Barr, established the North West Migrants Forum and is its Director of Programmes.  In her view schools in Derry and the rest of the country should recognise cultural diversity by updating the curriculum to teach children about the dangers of female genital mutilation (FGM) and other important issues. FGM, also known as female genital cutting and female circumcision, is the ritual cutting or removal of some or all of the external female genitalia. The practice is found in Africa, Asia and the Middle East, and within communities from countries in which FGM is common. It was recently announced that schools in England will be taught about the dangers of FGM from 2020. The curriculum will be reformed to include relationship education for primary age pupils and health education for pupils of all ages in state-funded schools. Secondary school pupils will also be taught about grooming, forced marriage and domestic abuse. FGM has been illegal in the UK for more than 30 years but the NSPCC said that it still affects hundreds of girls. “In 2017/18 the NSPCC Helpline was contacted 313 times by people worried about girls who may have suffered, or are at risk of, FGM. It takes courage to report concerns as many feel ashamed or worry they will betray friends and family. “But we need to end the silence that surrounds FGM to better protect children and combat this violent form of child abuse which has absolutely no place in society,” a NSPCC spokesperson said. Mrs Seenoi-Barr has worked as a human rights defender for over twenty-four years.  Her work began in Kenya fighting for Maasai women and girls’ rights - advocating for the eradication of FGM, early forced marriages and championing access to free primary education for deprived communities. She migrated to Derry in 2010 and since then has been involved in promoting and protecting minority rights in Northern Ireland through political engagement, dispute resolution and reconciliation. As someone who has fought to eradicate FGM in Kenya, saving thousands of girls from the procedure, Mrs Seenoi-Barr believes the same reforms taking place in English schools should be rolled out in Northern Ireland, which is fast becoming a “culturally diverse” society. Mrs Seenoi-Barr struggled to integrate when she first arrived in Derry due to the lack of services and support for migrant, refugees and asylum seekers in the city.  To ensure that other Black and Minority Ethnic residents would have better support than she experienced, work began to establish and build the North-West Migrants Forum - which has since helped around 2,600 people. In the upcoming local council elections Mrs Seenoi-Barr will stand as an SDLP candidate in the Foyleside district electoral area (DEA). ‘Safeguarding’ When asked if school children in Derry and the rest of Northern Ireland should be educated on these issues, she said: “Absolutely! NI is becoming culturally diverse. We have people migrating from all over the world to live and work here. “The reality is we bring with us our cultures and most of us would like to preserve these cultures, unfortunately, some of our traditions are outdated and harmful to children, particularly girls. “We know that FGM is a cultural practice and certain communities practice it for various reasons, however the main reasons are cultural identity – an initiation into womanhood, gender identity – moving from girl to woman – enhancing femininity, sexual control – reduce the woman’s desire for sex, hygiene/cleanliness – unmutilated women are regarded as unclean, a strong indication that girls from such communities are more likely to be forced to undergo this practice.” She added: “Safeguarding these children and young people is the whole of society’s responsibility and Northern Ireland needs to wake up to the reality that we are now a global nation and must be prepared to respond and deal with such challenges that may impact directly to the lives of children and young people from new comer communities. “Schools plays a pivotal role in protecting and safeguarding children. It should be a no brainer, they should ensure that they raise awareness of Female Genital Mutilation (FGM) and this start by equipping their staff with knowledge of FGM embedded in the school’s curriculum. Children should then be taught as early as possible on the dangers associated to the practice. “This will significantly reduce risk and protect them. It shouldn't just be included in a policy locked somewhere in a shelf or cabinet and hope for the best.” ‘School’s choice’ In a statement to the Derry News, the department of education (DoE) explained that relationships and Sexuality Education (RSE) is a mandatory element of the NI curriculum for all pupils of compulsory school age - 4 to 16. A spokesperson said: “In Northern Ireland, the DoE requires each school to have its own written policy on how it will address the delivery of relationship and sexuality education (RSE). The policy is based on the ethos of the school and in best practice subject to consultation with parents, pupils and governors. “Therefore, while the RSE curriculum is not prescriptive in relation to FGM, schools can choose the most appropriate time and pedagogical approaches to teach young people about issues such as FGM. The Department has asked the Council for the Curriculum, Examinations and Assessment (CCEA) to carry out a further update of existing guidance and resources to support teachers in teaching RSE. The spokesperson continued: “Key actions include identifying, signposting and developing guidance and curriculum resources to support the delivery of priority areas including sexual consent, domestic and sexual violence and abuse, LGBTQ+ issues, and the effect of social media on relationships and self-esteem. “CCEA is also currently developing a curriculum framework which clearly sets out for schools and teachers priority areas to be covered at each key stage in relation to RSE. This will again include issues such as same sex relationships.”
ADVERTISEMENT - CONTINUE READING BELOW