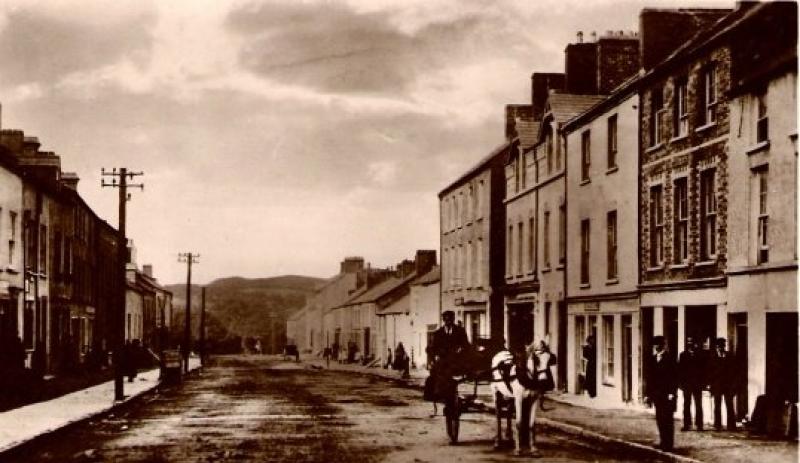 Maurice Charles Hime was born in County Dublin in 1841, died at Buncrana in 1924 and lies buried in Derry City Cemetery.

In his lifetime M.C. Hime established himself as a prolific writer and is reputed as perhaps the most intellectual headmaster that Derry’s illustrious Foyle College has ever had.

He married twice and his second wife rather unusually for a woman in her position, wrote a  book on the subject of the Irish King, Brian Boru which is still available to this day.

The future leading educationalist was the son of John Rhames Hime and Susan Hime (nee Black) and received his early schooling at ‘Mr Flynn’s School’ in Dublin and later at Royal Portora in Enniskillen. Maurice Hime entered Trinity College, Dublin at the tender age of 17 in 1858, leaving a few years later with a first class honours BA followed by a Master of Arts degree. Later, he was also awarded LLB and LLD degrees by the Dublin institution.

Its seems that whilst in the course of his university studies that Maurice Hime strongly contemplated entering the ministry of the Church of Ireland, but ultimately considered himself unworthy of the clerical life.

Hime also thought of a career in the Indian Civil Service and entering the law as a profession. But, it seems that as the time for his third level studies drew to a close he accepted the headmastership of the Monaghan Diocesan School in 1866 and so his association with the teaching profession began.

Whilst in Monaghan Dr Hime met Susan Stewart Robinson. The couple married on Christmas Eve, 1870 at Tartaraghan Parish Church in Co Armagh. The ceremony was conducted by the brides father Reverend George Robinson who was the Rector there.

It seems that the buildings of the Monaghan School were in a "ruinous state" and the headmasters house was also sparsely furnished. Nevertheless, Mr Hime's annual wage of £100 afforded the purchase of several ponies for the boys of the school who were regular participants in local hunts.

It was in Monaghan that M.C. Hime began his literary career. In 1871 he published a series of essays written by himself and other writers called 'Parting Words to Boys Leaving School'.

This was the beginning of many more works that included introductory texts on Latin, Greek and Logic and a book called 'Women's Superiority: On the Superiority, as Moral and Spiritual Beings, of Women to Men.' He also contributed to various periodicals and newspapers.

His literary prowess and output undoubtedly played a part in The Honourable The Irish Society offering him the headmastership of Foyle College in 1877. He was the first layman to hold the position of the school which at this stage was already 260 years old.

Foyle College traces its origins to 1617 and the establishment of the Free Grammar School at Society Street within the city walls of Derry by Mathias Springham of the Merchant Taylors' Company of London.

The school received no endowment from that company or from The Honourable The Irish Society, the body charged with the plantation of the County of Derry in the 17th century. There followed an ongoing dispute between the Irish Society and the Church of Ireland Bishop of Derry as to who had the authority to appoint the headmaster.

The old school within the city walls eventually outlived its usefulness, and in 1814 came the move to the newly erected and well-proportioned Georgian building set on a height above the Strand outside the city walls, designed by the architect, John Bowden who had also designed the Courthouse in Derry.

The school took the name 'Foyle College' in 1814, but for 30 years, from 1868, Foyle College had to compete with a vigorous rival in the Londonderry Academical Institution. This school, established by a body of influential local merchants, moved in 1871 from East Wall to a new site in Academy Road.

The Honourable The Irish Society, which contributed to the funds of both schools, proposed a scheme of amalgamation, and negotiations finally resulted in the passing of the Foyle College Act in 1896, the united school retaining the name and with it claiming the traditions of the older school.

Hime's educational abilities had been honed in Monaghan and he was confident enough to assert that Foyle required a 'vigorous revival'. By now he had also established the Schoolmasters' Association and his reputation and capabilities began to quickly attract increasing numbers of boarders and day students to the school.

However, Dr Hime's increasing professional success was affected with tragedy when his wife Susan died just two years after the move to Derry in 1879 aged just 29.

At the height of the Victorian era when 'children were best seen and not heard' the Foyle headmaster's tenure in the position was characterised by the fact that he was not an advocate of corporal punishment. Neither was he however a man who was 'soft' on punishment and didn't tolerate bad behaviour. But, it seemed that he was held in high regard by teachers and students alike.

This was proven when on his birthday in 1888 he was presented with a present and an address praising him. The gifts were so well received by the headmaster that he gave everyone a day off.

Outside of education and writing Hime's major interest seemed to have revolved around Freemasonry, particularly after his retirement.

He is recorded as being the founder of Sunbeam Masonic Lodge 191 with the first meeting taking place at his home in Buncrana.

This lodge has it's own interesting history. The site for the new Masonic Hall was obtained at Church Lane in Buncrana in 1908 at an annual rent of £10. Building work was completed in early 1909 at a cost of £870 with the money being gathered at various fundraising events and by public subscriptions.

The furnishings for the hall-settees, chairs, altar, pedestals an oak table and candlesticks cost £77. 18s and were made by and bought from Henry McDonnell & Son in Abercorn Road in Derry who were a firm of cabinet makers and undertakers.

During WWI the hall was used as a sailors club as the British fleet at that time used Lough Swilly and this resulted in many of the servicemen becoming members of the lodge. Records show that altogether, 104 members of Sunbeam Lodge 191 served in WWI and that everyone of them returned home safely.

The original Lodge Warrant of Sunbeam Lodge was destroyed in an arson attack on the Secretary's house during the Troubles in 1922. As the lodge membership consisted of many members of the Royal Artillery an advertisement was placed in the national press requesting them to contact the Secretary in a bid to re-establish records.

On March 12, 1941 the Secretary sent a very long letter proposing that the Masonic Hall be wound up because of the 'unsettled times'. As a result, exactly one year later on March 12, 1942 the Sunbeam Lodge relocated from Buncrana to Magazine Street in Derry. The Buncrana hall was sold to the Donegal Vocational Education Committee for £1,650.

Rebecca Helena Apjohn was herself from noted academic stock. She was the daughter of James Apjohn a renowned and respected chemist and physicist who lived and worked in Dublin in the 1800s.

He was internationally known for his scientific analysis of a mineral from Algoa Bay in South Africa that was named Apjohnite in his honour. He eventually became Professor of Mineralogy at Trinity College and only retired from lecturing at the age of 78 and lived another 13 years before dying at Blackrock, County Dublin on June 3, 1886 aged 91.

In 1888,  Rebecca Helena Hime penned 'Brian Boru and the Battle of Clontarf: A Ballad'.

The battle itself in 1014 pitted Boru against a Norse-Irish alliance and the victory of Brian Boru has always been interpreted as one that freed the island of Ireland from foreign domination.

It may have been seen as a strange topic for the wife of Dr Hime, also a Governor of the Apprentice Boys of Derry to choose to write about, especially in the bi-centennial year of the Siege of Derry. Nevertheless, the work can still be easily bought online to this very day.

In his later years he was a Justice of Peace in both the city and county of Derry, an Alderman on the city's Corporation and High Sheriff of the City in 1906. He died aged 83 on November 11, 1924. He is buried with his first Susan.

CAPTION: Main Street, Buncrana: Dr M.C. Hime was the founder of the Sunbeam Masonic Lodge 191 in Buncrana. He died in the Inishowen town in 1924  and is buried in Derry City Cemetery.
ADVERTISEMENT - CONTINUE READING BELOW