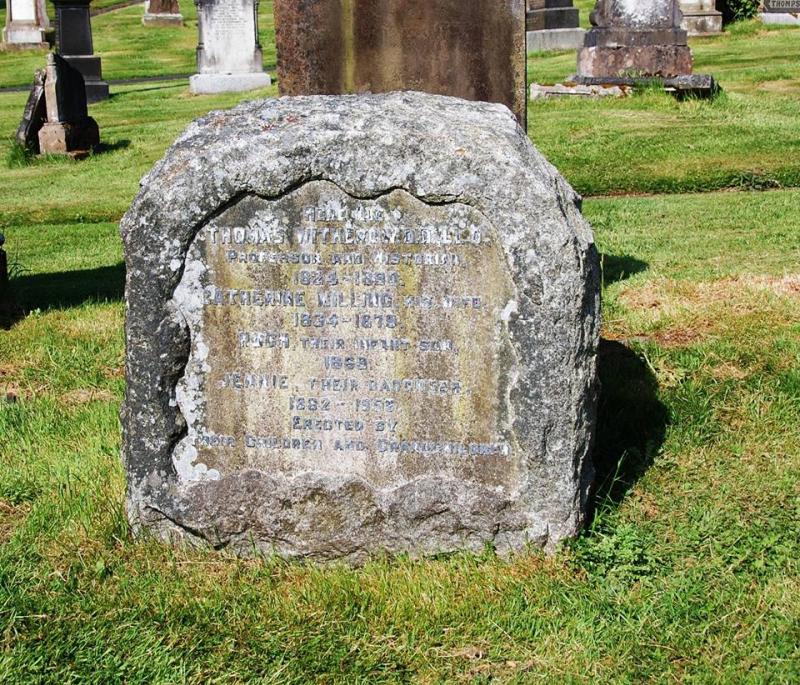 Thomas Witherow was born at Ballycastle near on May 29, 1824. His father, Hugh Witherow was a farmer and his mother was Elizabeth Martin.

By the time of his death in early 1890 Thomas Witherow had carved out a reputation as a leading theological academic and reached the top position in the Presbyterian Church in Ireland.

Rev Witherow’s early education was received at a ‘hedge school’-institutions which were reserved for the poor. Nevertheless his next step in education was at Belfast Academy which became the Belfast Royal Academy. He then moved onto the Royal Belfast Academical Institution (RBAI) and earned its general certificate, pausing to complete a session of study in Edinburgh.

The qualifications gained at RBAI was considered good enough to satisfy the Presbyterian Church that its holders were good enough to train for ministry.

After the completion of his religious training Rev Witherow began the process of being ordained into the Presbyterian Church. He was licensed to preach at the Presbytery of Glendermott in Derry in 1844 and was ordained on October 1, 1845 at Maghera Church by the Presbytery of Magherafelt.

The long-term pastor in Maghera, Rev Charles Kennedy was by this stage an elderly man beset by illness so Thomas Witherow was sent to assist him and take over some of the duties.

Maghera’s congregation had been established in the mid-seventeenth century when the religious, educational and political persecution of Presbyterians was still common. Rev Charles Kennedy passed away in 1855 after 40 years of service to his church and Thomas Witherow took over and served there for another ten years and had completed exactly two decades in south Derry when he departed.

While in service at Maghera Rev Witherow married Catherine Milling from the town on April 13, 1859.  Catherine however died on May 9, 1879 from complications in giving birth made worse by a chronic bronchial condition. The couple had ten children in all-two sons died in early childhood, one son called James survived into adulthood and there were also seven daughters.

Amongst the tasks undertaken by Rev Witherow at Maghera was an attempt to compile a history of its congregation despite the fact that records were pretty scarce.

On January 21, 1848 Thomas Witherow wrote about switching the records, such as they were, into a new system.

He recorded: "As Marriage Register Books have been provided by Government for the use in common with the other Congregations of the Church, there is no further use in my opinion to preserve this portion of the book for the purpose for which it was originally destined.

"I have thought it right therefore to mark down in this place some things regarding the history of the Maghera Congregation, which might be satisfactory to others at somedistant day-and for this purpose I intend to keep this portion of the book.

"I do not propose to write a history but only to furnish some material thereto that may be interesting to others, when the hand that now writes this shall have moulded into dust.

"Shortly after my ordination in this congregation as Assistant to the Rev Charles Kennedy and successor to Rev Smylie Robson now Missionary to the Jews at Damascus, I made application to the Senior Pastor for any documents in his possession that might throw light upon the history of our Congregation, but he informed me that by some accident most of the records in his possession had been destroyed-hedid not tell me however that he had any older than his own time, but said that on order of the Synod of Ulster had at any early period of his ministry written a history of the Congregation which had been given into the body, but he did not know what had become of it. I received no public documents whatever from him."

A few weeks later on March 8, 1848 Thomas Witherow wrote that some light had been shed on the whereabouts of the history of the Congregation-it was not however of much use.

He wrote: "Called this day and conversed with James J Clark, Esq.J.P. of Largantogher, who read me an extract which he copied from an old Session Book of Maghera Congregation, which gave an account  of the state of the congregation in the middle of the last century.

"The Rev Smylie Robson, on his removal to Damascus, it is not known whether he took the book or left it behind. This extract was to the effect that about the year 1719 or 1720 the Rev James Dykas became Minister of Maghera-that his stipend was 34 pounds-and that among a large staff of elders there are found the names of Samuel Auld and John Barkley."

However, Thomas Witherow was able to establish some details about the origins of the Presbyterian Church in this area of south Derry and he recorded:"Tradition informs us that the Congregation of Castledawson, Maghera Tubermore and Magherafelt met at Noclaughran to worship the Lord their God. There are yet some remains of the walls of their Meetinghouse to be seen at that place on the North side of Nocloughrin hill.

And from the snippets of evidence he gleaned from copied extracts of the old Session Book, Thomas Witherow concluded: "Among the list of Ministers ejected from their benefices in the North of Ireland at the Restoration given in Reid's History of the Presbyterian Church is a certain Robert Auld in the Presbytery of Tyrone, whom Reid conjectures to have been Minister of Maghera.

"From the documentary evidence above quoted I am of the opinion that there was no congregation in Maghera in 1661 and not until after the Revolution which set William and Mary on the throne. It is most likely that Mr Auld was Minister of Knockloughrin, at which tradition says there was a Church, and where must have met for Worship the ancestors of the people now forming the Congregations of Maghera, Tubermore, Magherafelt, Castledawson, Curran and Bellaghy."

Whatever the conclusions drawn by Thomas Witherow what is certain is that Maghera Presbyterian Church has existed at its current site since 1792. A church was built at the Fair Hill location around 1660 but was destroyed during the Williamite Wars of 1689-1690 when Jacobite forces destroyed it as they did many towns on their way to Derry.

The church was rebuilt but by the 1790s it was felt that a new one was needed and land for it was given to the congregation by the Clarks of Largantogher. The new church was constructed during the pastorship of Rev John Glandy. This church was severely damaged by the Tipperary Militia during it's occupation of Maghera after the 1798 rebellion as the congregation and Rev Glandy in particular had sympathies for the United Irishmen. Watty Graham, of the leaders of the United Irishmen in the district was in fact the son of the Session Clerk at Maghera.

The current church was rebuilt in 1835.

In 1845, Magee College in Derry had been gifted to the Presbyterian Church by Mrs Martha Magee with the intention that it became a training college for ministers of the church. But, it wasn’t until 20 years later in 1865 that the college and its beautiful Gothic building opened.

Amongst the first appointments to the college teaching staff was Thomas Witherow. His expertise in church history and in fact history in general plus his twenty years of experience as a pastor meant he was a fine choice to become Magee’s first Professor of Church History and Pastoral Theology.

Witherow’s interest in church history had begun by reading books about the Reformation and in particular volumes written by J.H. Merle D’Aubigne. He never lost an industrious approach to producing academic material and was recognised and rewarded for his efforts on several occasions.

Then, in 1884 he became a senator of the Royal University of Ireland, and the following year, 1885 the same institution granted him a Doctor of Laws LL.D degree.

Amongst Rev Witherow's large collection of writings were two books concentrating on the Glorious Revolution of 1688 and the subsequent Siege of Derry which formed a central part of it.

Speaking about these works Rev Witherow said: "To taunt our neighbors with the defeats our ancestors inflicted on them is therefore neither wise, nor manly, nor generous nor Christian."

The respected academic and clergyman died on January 25, 1890 aged 65 and was buried in Derry City Cemetery with his wife Catherine and their children who had died in infancy.