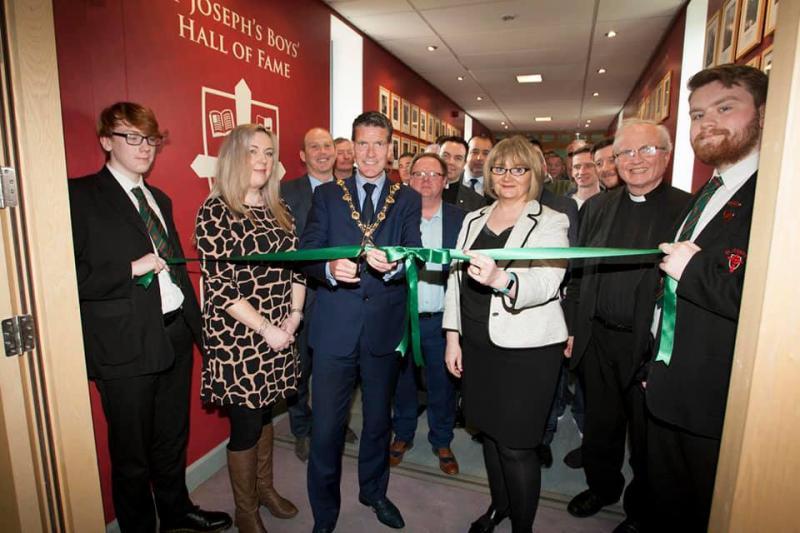 Aimed at highlighting the achievements of past pupils in all fields of employment, it is a bid to inspire current and future students to believe they can achieve what they set their minds to.

The now permanent feature of the school was officially opened by the Mayor of Derry City and Strabane District Council John Boyle, himself a former pupil at St Joseph's in one of his last public engagements.

The idea for the Hall of Fame was initiated by Graeme Doherty, who isa a senior teacher at St Joseph's.

Speaking at the event Mr Doherty said: "The Hall of Fame is something I've wanted to do here for a long time. It's fair to say that it could not have been done without a lot of people's help.

"I'd like to thank a number of people for their help and they are Leona O'Neill, President of the Past Pupils Union and everyone involved in the Union as well. Jim McCafferty for taking the photo's and doing much more than that as well. And, Damien Lynch and Paul McGilloway for printing and framing the photograph's too.

"I wanted the Hall of Fame to inspire our current pupils so they can see the positive footprints that St Joseph's has made in Derry and beyond. In particular I wanted it to reflect all types of careers and that idea of being happy at your place of work. That really is the ethos of the wall.

"In the words of Bruce Springsteen, and I like to point out he's not a past pupil, 'you can't start a fire without a spark.'

"But, I have already seen the effect your pictures on the wall have had with the idea that 'if he can do it, then I can do it.'

"We are already seeing the boys stopping and pointing up and talking about different careers. So, it's just a small step that might help boys on their way.

"Our school motto is 'Achievement for All' and our Hall of Fame proudly reflects that.

"So, I ask you, the past pupils, to continue to spread your stories of success about your time at St Joseph's to your family and friends so they make our school their first preference for their sons and we get to add lots more pictures to the wall."

Bishop of Derry, Dr Donal McKeown also spoke at the event at St Joseph's and said: "The two names that spring to mind over the last couple of days in the news are Danny Baker and Freddie Starr.

"I think like most people of my generation, the only thing I ever knew about Freddie Starr was that he ate somebody's hamster. Imagine growing up and having buck idiots like that as your role models. It must be really depressing.

"If you thought, 'I want to do something great and I want to be inspired', imaging having Danny Baker and Freddie Starr as symbols of the best that life can be. That's why it's wonderful to have a hall like this.

"You all made your own impression because you wanted to do something good for society. So, I hope the Hall of Fame inspires our wonderful young people not to believe that buck idiots are the best you can aspire to be.

"I hope this can inspire our young people to say, 'I can be something wonderful.'

"I mean we have the example of Fr Chris Ferguson who last Sunday ran the London Marathon, taking twice as many steps as anyone else because he's short in stature. But, nevertheless he finished it.

"I suppose the Catholic school tries to to set some role models there in terms of the notion of church and saints and all of that. Human beings can be wonderful, believe in a God that believes in people."

Principal of St Joseph's Martina McCarron told the Derry News: "As principal of the school, I am delighted with this and I want to acknowledge the work of Graeme Doherty whose idea work brought this whole idea to fruition.

"I am so proud to be principal of this great school and to have the footprint, as it has been described, of past pupils here on this wall and this will be followed by the footprint that current pupils and the mark they will make on Derry and on the wider world. I am very proud of that as well."

And, Mayor of Derry, Councillor John Boyle said: "I can't tell you just how proud I am to be standing here today and to have the great honour of cutting the ribbon and officially opening the Hall of Fame.

"Such has been the magnitude of the impact that past pupils of St Joseph's Boys School have made across so many different fields that and that has been very well reflected in the photographs on this wall. There are figures from sport, industry, education and the clergy and some who work in politics at various different levels.

"My own reflections on St Joseph's are that when I walked out through the gates, I really didn't have very much of a clue what I was going to do with myself never mind pursuing a future career in politics and ultimately to be the mayor.

"It's interesting to see where life takes you and I've seen a number of different careers as an adult. But, for me when I was at this school, this was an entire oasis of calm in the middle of a sea of madness. And, I think many in this room would share that particular point of view.

"There was a great safety within the walls of this establishment, not least because of the service given to us by our teachers who set a great example to us in how we should behave in our lives going forward.

"I also want to reflect upon the fact that there are so many who are no longer with us. Not only former teachers but obviously and sadly as well many young men who perhaps didn't grow into becoming the successes they wanted to be and I want to remember them as well.

"I know as you are sitting there you are reflecting upon your school friends who are no longer with us. I think they would be proud of how this school has grown in strength and provides great leadership and I expect to see young men like those who we see here today to join us and many more on this auspicious wall in years to come.

"I think it will serve as a perfect example to future students who come through these hallowed corridors. They will look at the wall and and reflect on the fact that there are so many things that they can do with their lives and this is a really positive example of that."