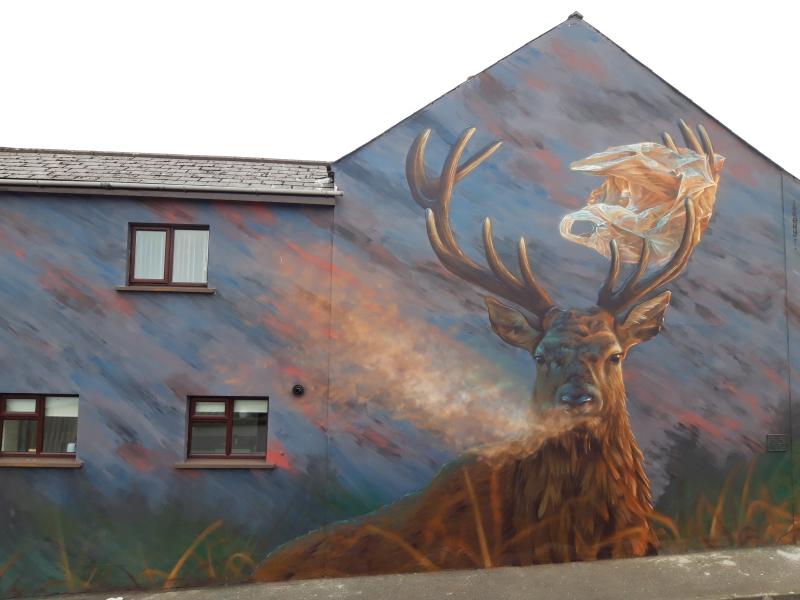 A London-based graffiti artist has transformed a gable wall in the Rosemount area of Derry with a new artwork which carries a powerful environmental message. The artwork titled Monarch of the Glen has been painted on the side of a house in Glenview Terrace, which is situated between Rosemount and the Glen. Locals have been quick to give it a nickname - 'The Stag with the Bag'. Buoyed by a rare spell of Derry sunshine, the artist completed it in just five days over the course of last week. The artwork was painted by London-based artist 'Irony', whose Facebook page Irony Paints On Things describes him/her as a painter, vandal and street artist. It was facilitated by the London Calling Street Art blog with the assistance of Derry man Steven Bradley. The piece depicts a majestic deer with a plastic bag caught in its antlers, evoking a strong environmental message about plastic waste, while also tipping the hat to the location in which it stands. Steve Walsh, editor of London Calling Blog, explained how the project came about: “We run a number of community initiatives around our hometown of London where we facilitate spaces for artists to showcase their art and the communities they adorn get to enjoy the results of such activities. “One such project, in this instance in Stockwell, was instigated by Steven Bradley who along with some of his neighbours contacted myself to provide permission to paint artwork on their back end of their properties. “Steve is from Derry and contacted ourselves asking if we would be interested in finding an artist to paint this lovely gable end spot recently completed in Rosemount. “We contacted an artist we have worked with back home in London on several occasions who we felt would make exemplary use of the space being offered, and it's fair to say that was certainly accomplished.” This was Irony's first time painting in Derry, but the artist has painted in Belfast on three occasions in the past. Rosemount was chosen simply because Irony and London Calling were asked. “All the projects we are involved with are initiated on the basis that we have permission from the property owner to allow an artist to express themselves. “We painted where we did because we could. Permission coupled with artistic freedom is how we get walls painted.” People living in the area were exceptionally supportive and positive about the work. The artists said they received a warm welcome from residents and described it as an “absolute pleasure” to see their reactions to the work. Highlight Whilst the piece was progressing, adults with learning difficulties who attend the nearby Praxis Centre took great interest in the painting and started drawing their own versions in an art class. Irony then decided to go along to their building at Eden Terrace where an impromptu painting of a fox was created. Mr Walsh said: “We did indeed facilitate a second unplanned work around the corner from the large gable mural Irony completed. Everything about this second spot is what makes what we do so enjoyable. Street Art is the most democratic art form in society, it's there for anyone who wishes to engage with it. “This spot came about as a group from Praxis Care - who it turns out are located just around the corner from where we were working all week - passed by to admire the work being constructed with a group they work with.” He added: “Praxis provides vital care to adults and children with learning disabilities, mental health conditions and dementia and the staff and group the work with were so impressed by the artwork unfolding around the corner they instantly and most generously donated a space on their premises to paint which Irony fortunately had time to kindly leave them with a lovely little addition before we headed out of town. “Everyone at the centre made us feel so welcome and made this the highlight of our trip, also it’s always amazing for us when people are so willing to get involved and offer up spaces to paint that everyone can enjoy.” There are no plans for further artwork at this stage, but those behind the project said that if Derry or Belfast wishes to invite them back, and if feasible, they would love to return. “But as well as this lovely addition to the town instigated by Steven Bradley which everyone now gets to enjoy. We know Steven would love to see more street art in Derry and if anyone is interested they can contact him. “The city is also fortunate to have UV Arts based in the city who work with local and international artists and have facilitated some fantastic artworks around Derry that we spied on our visit to this wonderful city,” Mr Walsh concluded.
ADVERTISEMENT - CONTINUE READING BELOW