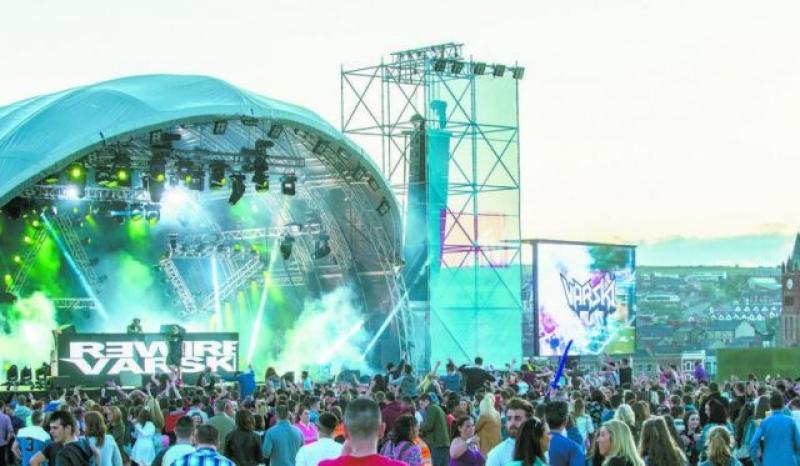 The 2019 programme of music events taking place Ebrington Square has just been announced by The Executive Office. The first marquee event on the calendar is the Jump U18 Music Festival which will be held on June 29. Derry based, Jika Jika!, will also host summer and Halloween music festivals which will be extended from two days to three days this year - on August 23-25 and October 31-November 2 respectively. The temporary car park on the site will also be used to host events such as the Irish National Cycling Championships at the end of June and Fun Fairs. Ebrington Square has been resurfaced in recent months and will be ready for use this week, according to The Executive Office. The previously problematic loose gravel surface has now been replaced with exposed aggregate concrete and grass. Two new roads into the site which are due for completion this summer will improve accessibility. The site has an iconic backdrop overlooking the River Foyle and Peace Bridge which has become synonymous with music events in the city. Difficulties in developing the site have been well-documented and many buildings remain unoccupied at present. However, it is currently home to a Creative Industries Hub, Ollie’s on the Square, the Walled City Brewery and a Small-Medium Enterprise Hub for business start-ups. And ambitious plans contained in an Executive Office marketing brochure indicate that works are in progress which could potentially see the site transformed over the next couple of years. This includes significant office accommodation set to commence late this year, a new café and bike hire facility scheduled to begin this summer, development of a 4-star, 152 bed hotel with spa and leisure facilities, as well as plans for additional restaurants, childcare facilities and an art gallery. The new-look parade ground at Ebrington Square was first opened in 2012 and formed a key part of the regeneration of the former Army Barracks in the Waterside. The site is owned by the Northern Ireland Executive Office, which was formerly the Office of the First Minister and Deputy First Minister (OFMDFM), who took over responsibility of Ebrington after the urban regeneration company Ilex was wound up in March 2016. Ebrington Square Jump U18 Music Festival 29 June Country Comes to City 6 July Together & Bon Voyage Music Festivals 26 - 28 July Jika Jika! Summer Music Festival 23 - 25 August Jika Jika! Halloween Music Festival 31 Oct - 2 Nov Temporary Car Park Irish National Cycling Championships 29 - 30 June Cullen's Summer Fun Fair 2 - 11 August Carousels Ireland Fun Fair 20 - 29 September Xtreme Halloween Fun Fair & Panoramic Wheel 25 Oct - 3 Nov There will be events held in the Underground Car Park up until 1 August 2019
ADVERTISEMENT - CONTINUE READING BELOW