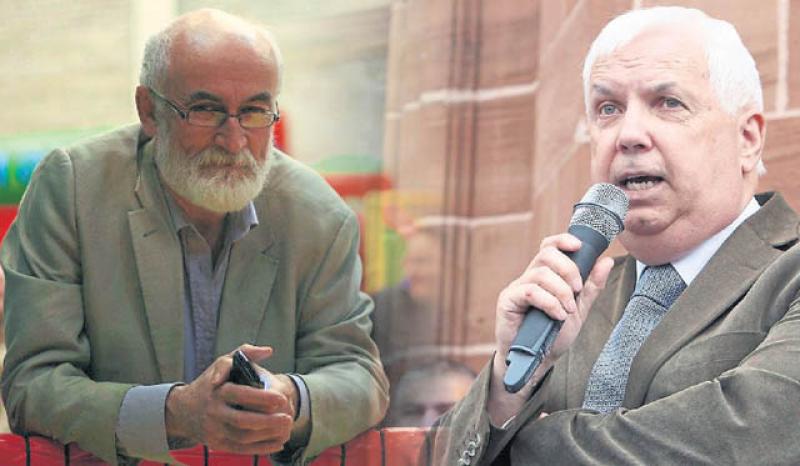 Two Creggan men who have dedicated their lives to community work will be honoured next month by Ulster University. Influential leaders in their field are being recognised by Ulster University during summer graduations. It will acknowledge the outstanding contributions of prominent educators, scientists, leaders, sports people and humanitarians both locally and globally by conferring honorary degrees on eleven individuals during upcoming graduation ceremonies. Community activist Eamonn Baker and, educator and Foyle Cup founder, Michael Hutton, are amongst the recipients for their civic contributions. Speaking to the Derry News this week, both men said they humbly accepted the honour. Eamonn commented: "A lot of people have said 'you deserve it', but I thought, do I really...If I'm worthy then I can think of half a dozen others who are too, people like Eamon Deane and Maureen Hetherington." Eamonn recalled growing up in Creggan where his father, Joseph, would return home, sweat dripping from his brow, after a hard day working in the Castle Laundry. “He had the view that the way to make a better life was through education. Himself, and my mother Ellen, would both have cared that we as children were educated. “I think my daddy might have said more than once, ‘I wish I had the chance you boys are getting’”. Community work for Eamonn began with the Simon Community in Belfast and Cork. By the early 80s he was working in the Derry Youthways project which, while challenging, was also "deeply inspiring". "There was a dynamic and enthusiastic team of people. It involved group work with young people who were brilliant but did not have positive experiences at school. "This gave them something they were missing in school and at its core was personal development so that young people could choose what work placement they wanted and we would attempt to facilitate it. Other strands were outdoor pursuits and group work sessions." After another stint of community work in Sheffield, Eamonn returned to Derry in 1991 where he devoted himself to community education. He has been working with Towards Understanding and Healing at Holywell Trust for the past ten years. The essence of the project is peace building and conflict resolution. Work focuses on the needs of the individual by creating a space for reflection and recognition of individual experience and supports individuals in sharing their stories. The most rewarding aspect of it, he said, is when people see a difference. "If people feedback to you that they've got a greater understanding, perhaps of the other community, or indeed feedback that it has provided some healing for them in their life then that's rewarding. "It's the first time some of these people have shared their personal stories of the Troubles. I can think of people who've said, 'that meant an awful lot to me' - and that makes it worthwhile." ‘Satisfaction’ Meanwhile, Michael Hutton said he was asked to accept a degree as a doctor of science for services to the development of young people through education, sport and community engagement. And for services to addressing segregation due to his cross-community work with the Derry & District league and Foyle Cup. Michael has given over 35 years’ service as a referee to youths, 37 years to the D&D youth committee, the Foyle Cup has now been running for 28 years and he was a primary school teacher for many years. "It's always nice to get a letter like that where somebody recognises the work done, not necessarily by me but by the organisation that I'm involved in. "In the past I have been asked to accept lots of honours, some from government, which I declined because I never want publicity. As long as the thing is done and it's done well that's more than enough satisfaction for me. "I discussed it with a few family members and others who encouraged me to accept it, number one, because it was recognition of what was being done in the city with young people by those who supported me in the organisations. "And secondly, as a graduate from Ulster University it was giving them some recognition of a graduate who had gone on to do this sort of work.” He added: "They have helped me out with the Foyle Cup tournament, they provide their facilities free of charge for the mini soccer, they facilitate us with the huge parade that we organise, so on that basis I said I'd give it more consideration. But I think it was April before I formally accepted the award offer. "My children were saying, ‘it's a great honour and we think you should accept it, but we know you, you don't seek publicity.’ They expressed their opinion and left it for me to decide.” The Foyle Cup will be launched at 3pm this Sunday in the Waterfoot Hotel where Niall McGinn will make a special guest appearance. The draw will take place and the fixtures will be released within 48 hours. This year there will be about 400 teams, competitions for boys and girls, and sports with disabilities competitions where most of the participants have Down’s Syndrome – those teams include Oxford Bulls, Sion Swifts, and Glentoran. The same teams will lead the parade into Guildhall Square. This year’s tournament will take place from Monday 22nd July - Saturday 27th July.
ADVERTISEMENT - CONTINUE READING BELOW