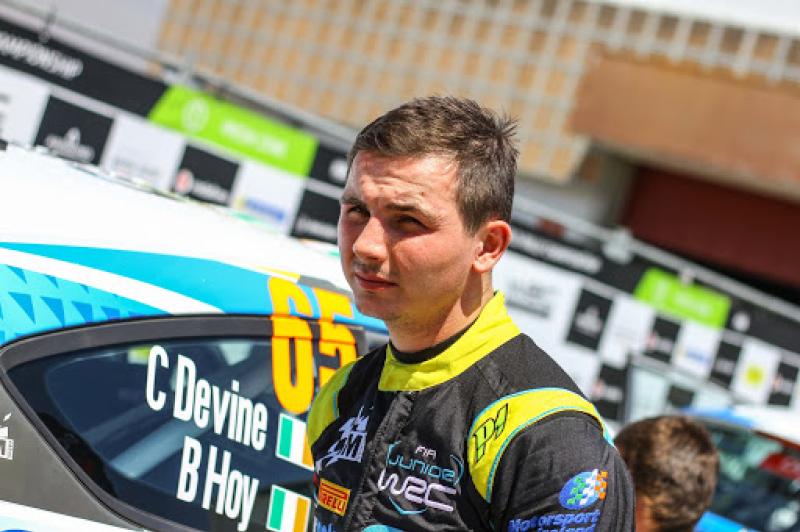 Park's Callum Devine is eager to shine this weekend.

Callum Devine wants to be among the leading lights at this weekend’s Donegal International Rally.

The Park man, who has Noel O’Sullivan calling the pacenotes in a VW Polo GTi R5, is the second seed, behind Sam Moffet.

Devine is making his first full assault on the Irish Tarmac Championship this year having competed in the European Rally Championship in the previous two years.

Donegal has always gripped Devine and the 27-year-old is eager to shine this weekend.

“It’s a great buzz to be in Donegal,” Devine said.

“My earliest memories are going and watching with my dad. I remember Andrew Nesbitt and those kind of boys. It was always some buzz. I’ve competed all over Europe, but I’d never miss Donegal. I love it. It’s a great occasion. Where would you see crowds like it?

“Donegal is the cream of the crop in Irish rallying. Everyone wants to be here. It’s been a long time and it flies. It’s great to see it back again.”

Devine was siting third when the 2019 Donegal International Rally was halted following the tragic death of Glenswilly driver Manus Kelly on the Fanad Head stage.

Covid-19 prevented the event from taking place in the last two summers. Its return promises a cracking weekend and Devine, who won the 2021 Donegal Harvest Stages Rally, is looking to test the Polo’s worth around the 20 special stages.

“It was quite a rush for the Circuit, but the car has been really good. We went to Killarney and we had a good battle to get a win. It was another fantastic event for us to win. It was a good start coming in to Donegal.”

Devine was third overall in the Irish Tarmac Championship in 2019 and has been one of Ireland’s top talents for some time now. He was given the Billy Coleman Award in 2017 when named as Motorsport Ireland’s Young Rally Driver of the Year.

He won the R2 title in 2016 and won the British Junior Rally Championship a year later.

Ahead of Donegal, he said: “I hope I can be competitive. If the weather is dry, the stages will be fast. Sam wasn’t hanging around the last time he was here. I hope to be up there - and we’ll try our best to do that. There’s a good crop of guys.”

He said: “I love Atlantic Drive, but that was when I was in a small front-wheel drive car! That really suited us for a bit of driving. They’re all good. There’s some buzz when you’re sitting at the bottom of Knockalla and the crowds all walking up.”