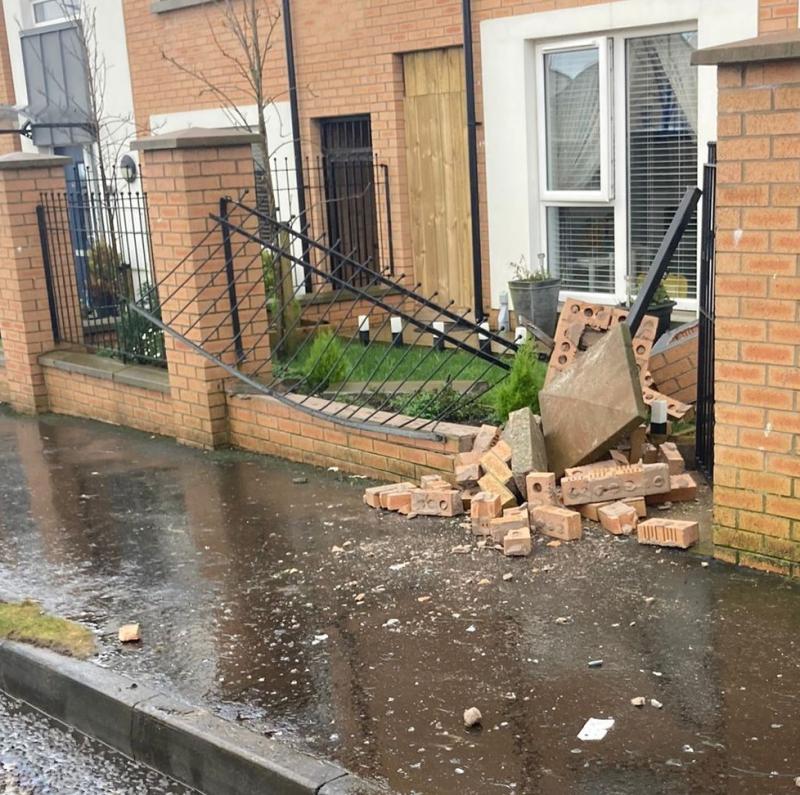 The PSNI are appealing for anyone who has any information on the motoring incident that led to this wall at Derrymore Park being smashed, to contact them.

Sinn Féin councillor, Conor Heaney, has called on the police to clamp down on 'death drivers' who have been using the Springtown Road.

Cllr Heaney, who represents the Foyleside ward, was speaking after the wall and fencing of a property on the road was smashed in by a vehicle going at a high speed.

Fortunately, the initial collision stopped the out-of-control vehicle in its tracks and it did not crash into the Derrymore Park house itself to ensure that a young family – which included a toddler – did not come to any harm,

Cllr Heaney says that measures must be taken to ensure such incidents do not happen again as the next home that is crashed into may not be so lucky.

He said: “There has been a noticeable increase in death driving in the Springtown Road area in recent weeks.

“In the latest incident earlier this week a young family with a toddler escaped death or injury when a stolen car crashed into their house at Derrymore Park in the early hours of the morning.

“I have requested the Department for Infrastructure to assess what additional road safety measures can be installed in the area which would make it harder for the death drivers to operate. I have also spoken to the police and other agencies to ask them to proactively clamp down on these death drivers in the coming weeks.”

Meanwhile, Cllr Heaney in tandem with Sinn Féin Foyle MLA Pádraig Delargy, has set up an online petition calling on both the Roads Service and the Department of Infrastructure to review current safety measures for the Springtown Road and for the PSNI to up their presence in the area and act as a deterrent on 'death drivers'.

The petition can be signed at: www.change.org/p/department-for-infrastructure-stop-death-drivers-along-the-springtown-road

Meanwhile the PSNI have urged anyone who was in the area of the crash at around 5am on Thursday, January 6, or has any information about the stolen vehicle to contact them using the reference number: 159 06/01/22.