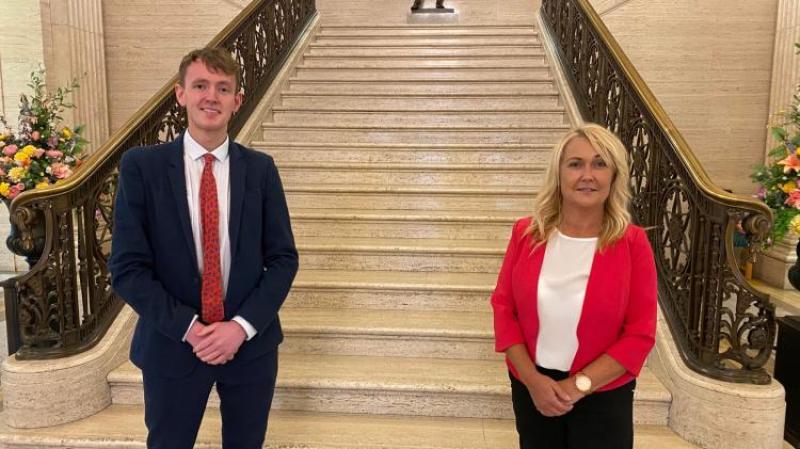 The duo replace Karen Mullan and Martina Anderson who have stood down following a Sinn Féin review and restructure of the party in the Foyle constituency.

Mr Delargy, 25, is from the Bogside area of Derry and has worked as a primary school teacher and is a passionate advocate for supporting and promoting the Irish language.

Ms Ferguson, 49, is orginally from Strabane but has spent the past two decades in Derry. She has worked as a project manager for the Greater Shantallow Area Partnership community organisation in the city.

Mr Delargy insisted that he will be focussing on the expansion of the University of Ulster campus at Magee College in Derry as well as being a champion for mental health services.

He said: “Getting things done and making a difference to people's lives is why I got involved in politics.

“Having worked as a primary school teacher, I'm passionate about education and about the future.

“That's why expanding Magee University and creating opportunities for young people is a priority.

“I will help establish Derry as a thriving modern city with more jobs and as a place where owning a home is a reality, not a dream with people having the best chance at having a decent life.

“In 2016, I lost my biggest inspiration in life to suicide, my aunt Patricia Hughes. I don't know a single person that hasn't been touched by the mental health crisis in our communities.

“I want to be a champion for better mental health and detox services.

“An exciting conversation is taking place right now on this island. We are the generation that will secure Derry's place in the heart of a new and united Ireland.

“I look forward to building a republic of opportunity and a fairer Ireland that gives workers and families a break.”

Ms Ferguson said that she would do all she care to help families received an improved standard of childcare and for more homes and investment in Derry.

She added: “I grew up in Strabane but have worked across Derry for over 20 years. All my life my priority has been the betterment of our communities and making sure that workers and families get their fair share.

“I have a track record of getting things done and as a mother, I understand the issues facing parents and carers when it comes to childcare and the everyday challenges of raising a family.

“I'm in politics to make a difference for people and families and that means delivering jobs, investment, more social and affordable homes and better mental health services.

“This is an exciting time of change. We've never been closer to a united Ireland . Our city has so much potential to grow and thrive. I will work to ensure that a transformed Derry will take its place at the heart of a new republic.”

Sinn Féin's Pearse Doherty said the new MLAs will “bring a great deal of experience and enthusiasm to our assembly team at such a crucial time for politics across the island of Ireland and a new era for Sinn Féin in Derry”.

Mr Doherty thanked the outgoing MLAs “for all the hard work they have done on behalf of this constituency”.

The decision by Sinn Féin to stand down Anderson and Mullan came last May and Ms Anderson admited back then expressed her disappointment.

At the time she said: “At the end of last year, the Sinn Féin leadership initiated a party review in Derry.

“One of the recommendations was that the two Sinn Féin MLAs should be asked to stand down.

“As a republican activist for over 45 years, I admit that recommendation came as a body-blow. Since then I have been contacted by comrades, friends and supporters from across Derry and beyond, offering their solidarity.

“It has been a difficult time for Karen Mullan and I but no matter that difficulty, we have approached this with republican integrity and Derry pride.

“This struggle is bigger than any one of us.

“The national leadership correctly wants to re-energise Sinn Féin in Derry and re-connect it to our base.

“Throughout my life as a republican, I have always put our struggle first. So in wanting what the leadership want to be best for it, I have decided not to seek the nomination to contest the next Assembly election.”

In a statement released today, Ms Anderson's fellow outgoing MLA, Karen Mullan insisted she will continue to work and fight for the people of Derry – no matter in what capacity.

She said: “The past four years have been a tremendous honour for me and I would like to thank the membership of Sinn Féin who placed their faith and trust in me.

“I hold my head high as I know that I worked hard every day to make Derry and Ireland a better place for all our people.

“I have been overwhelmed by the hundreds of people from all communities and all walks of life who have contacted me over the past few months to wish me well and offer support at what can only be described as a very difficult and challenging time for me and my family.

“These messages of support and solidarity have meant so much and I will never forget the kindness shown.

“Tomorrow is a new day and I will rise and meet the opportunities and challenges ahead with the same determination and energy that I have always displayed as an activist.

“My first thought has always been to support people and families who face tough and trying circumstances in life and I will continue to do this wherever I am.”