Concern over Ciaran Coll after defender is hospitalised 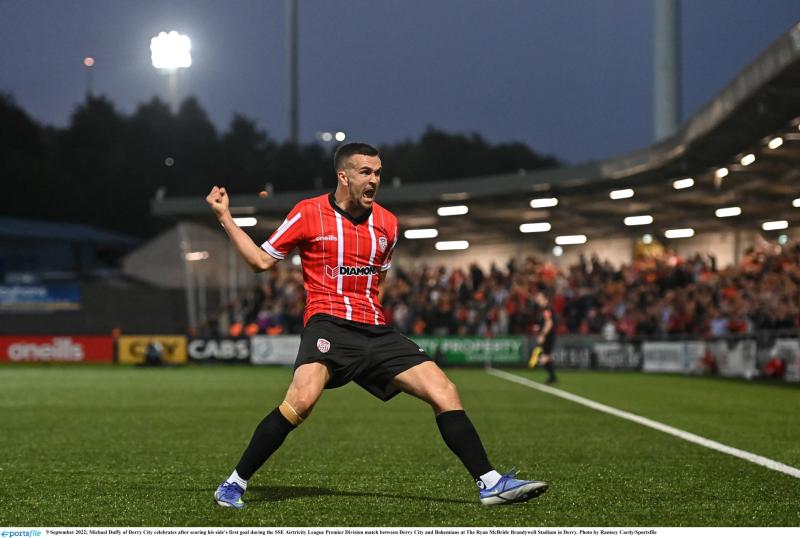 An injury to Ciaran Coll took the shine of an important victory for the Derry City at the Brandywell.

The defender lay unconscious for 10 minutes after landing awkwardly following a challenge with Bohemians’ Ali Coote, and had to be transferred to hospital as a result.

A wonder goal from Michael Duffy sealed the points on a nervy night overall, but the concern for Coll will take precedence.

The game lost its way somewhat after the injury but it then exploded into life as half time approached thanks to a wonder goal from Michael Duffy.

The City winger took a corner which came to Shane McEleney at the back post, and the centre-half’s attempt to put it back across goal turned into the perfect assist for Duffy, who met the ball first time with a sumptuous curling effort which bet right into the top corner beyond Joe McCracken to give Derry City the lead.

Derry survived a scare early in the second half when, after good pressure from Bohs, they won a corner which came all the way to Rory Feely at the back post but the defender, completely unmarked, headed badly over the bar.

City responded well and Patrick McEleney stung McCracken’s hands, but Bohs should have been level on 61 minutes when the ball broke for Ethon Varian in the box and he looked certain to score, but he was denied by Brian Maher, who made a crucial stop with his left foot.

An effort worthy of winning any game of football! ⚪pic.twitter.com/xKNPyx4oEo

Bohemians were building momentum and Liam Burt went on a driving run right into the City penalty area before delivering the ball right across the area where Ronan Boyce just about cleared under pressure from Varian.

Bohs pushed hard in the closing stages, but it was Jamie McGonigle who came closest to sealing the points with an effort which just flashed wide of goal. The final whistle was greeted with huge roars from the Brandywell crowd, with City securing their fourth successive clean sheet.