Derry Greyhounds: Old Fort stars on All The Luck In Life Gala Night 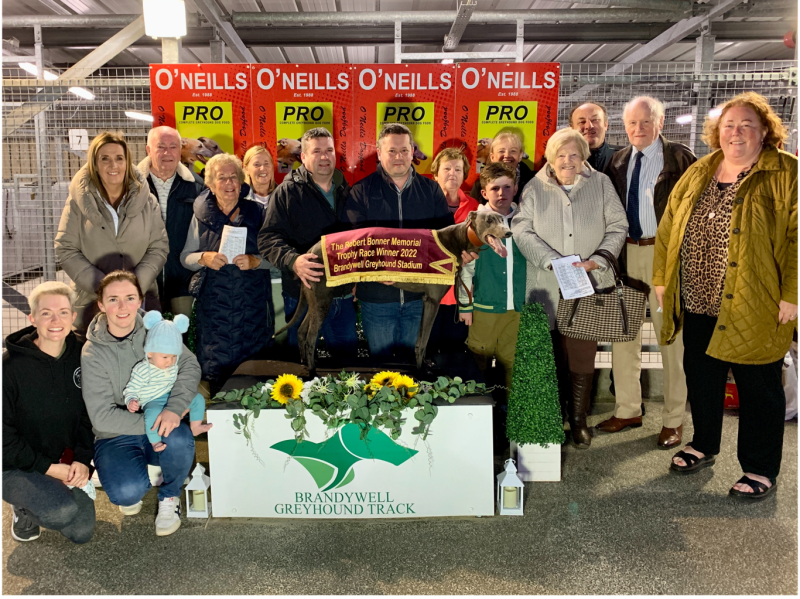 The second annual All The Luck In Life Gala Night was held on Monday last at the Brandywell and we were fortunate to be able to enjoy pleasant weather for the evening.

The meeting is named after the late Robert Bonner’s parting message as he would often wish the folk he met, all the luck in life.

Robert had a great love for greyhounds and a passion for the sport, especially at Brandywell.

The Bonner family were honoured that they were joined by sponsors who supported all the races on the programme, many of whom were also remembering dearly departed loved ones.

The McLaughlin Electrical Sprint was the first race of the evening and prize money was boosted by the sponsor. Buick Maestro (Droopys Buick x Jaytee Summer, Aug ’20) is a new recruit for Paul McFadden and he impressed with a slick exit from trap 4 for a trap to line win in 16.82.

This was a first career success for this ex-Tralee hound where he had raced twice before. He is lightly raced and should continue to improve with racing experience.

The latter had the advantage of the inside line at the first bend and came out of the second bend in front. Jesse rallied up the home straight again but Call You Tonight held off her challenger by 0.5 lengths in 17.10. 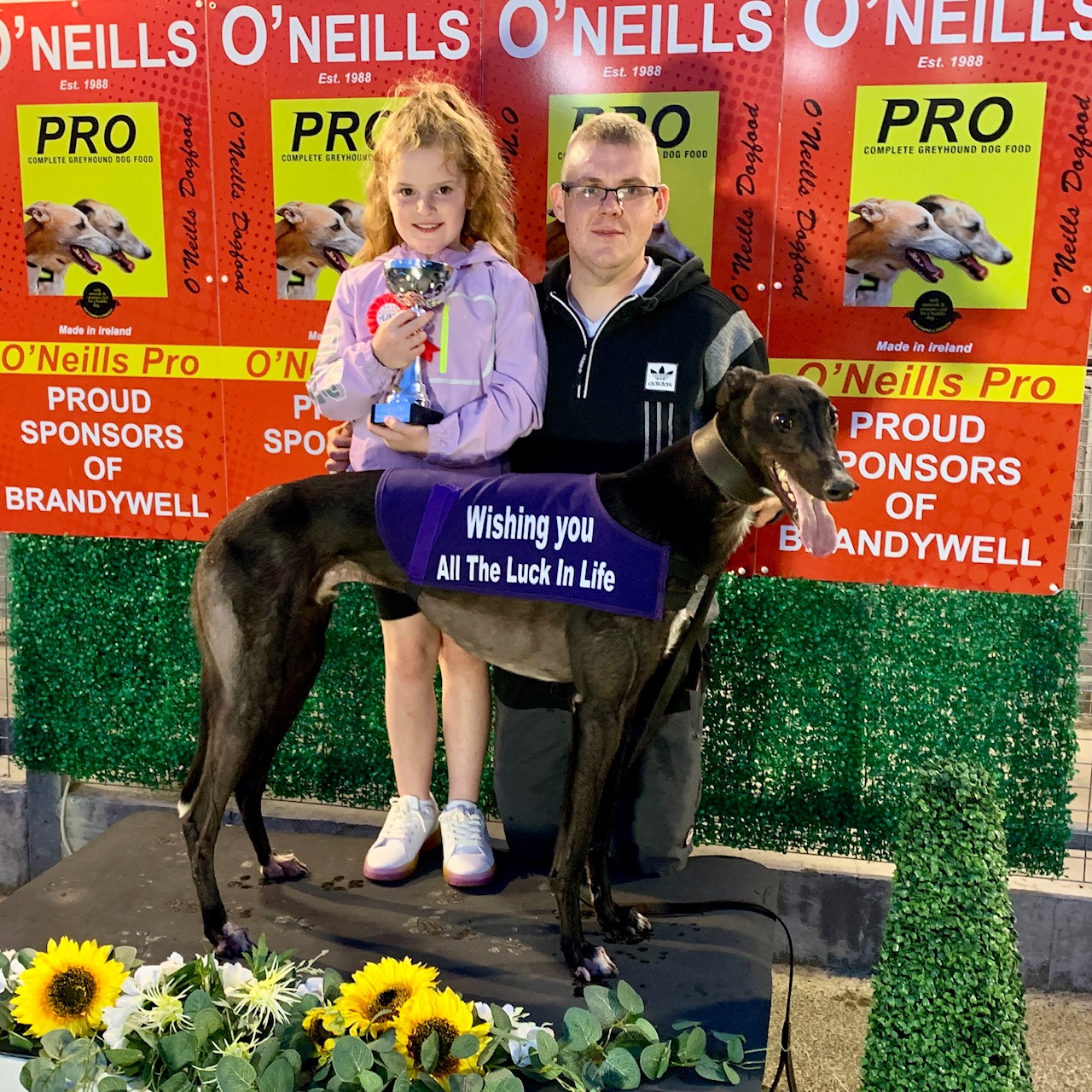 Derrinasafa Jet who won the Golden Regent Memorial Trophy Race with Kealan O’Kane and Orla Wray who was also celebrating her birthday.

This looks to be a useful litter with his sister Tax You Tonight winning her last 2 races at Newbridge most recently clocking a sizzling 17.46 for the 325 yards.

The dam Bubbly Madeva has also thrown Native Maestro in her first litter and he competed at Group 1 level, winning 11 of his 19 races.

Candy Collins Beck in America sponsored the third race in memory of Rory aka Golden Regent who she adopted after he retired from racing.

Born in 2009, Rory was part of the Beck family for 9 years before he went to rainbow bridge in June 2022. The Golden Regent Memorial Trophy Race carried boosted prize money and an engraved trophy.

It was Kevin O’Kane’s Derrinasafa Jet (Droopys Jet x Derrinasafa Spot, Dec ’19) that made the most of his trap 1 draw to land the spoils in 16.89. The field was evenly away and Jet determinedly held his position on the inside at the first bend to take up the lead which he stretched to 2 lengths at they crossed the winning line. 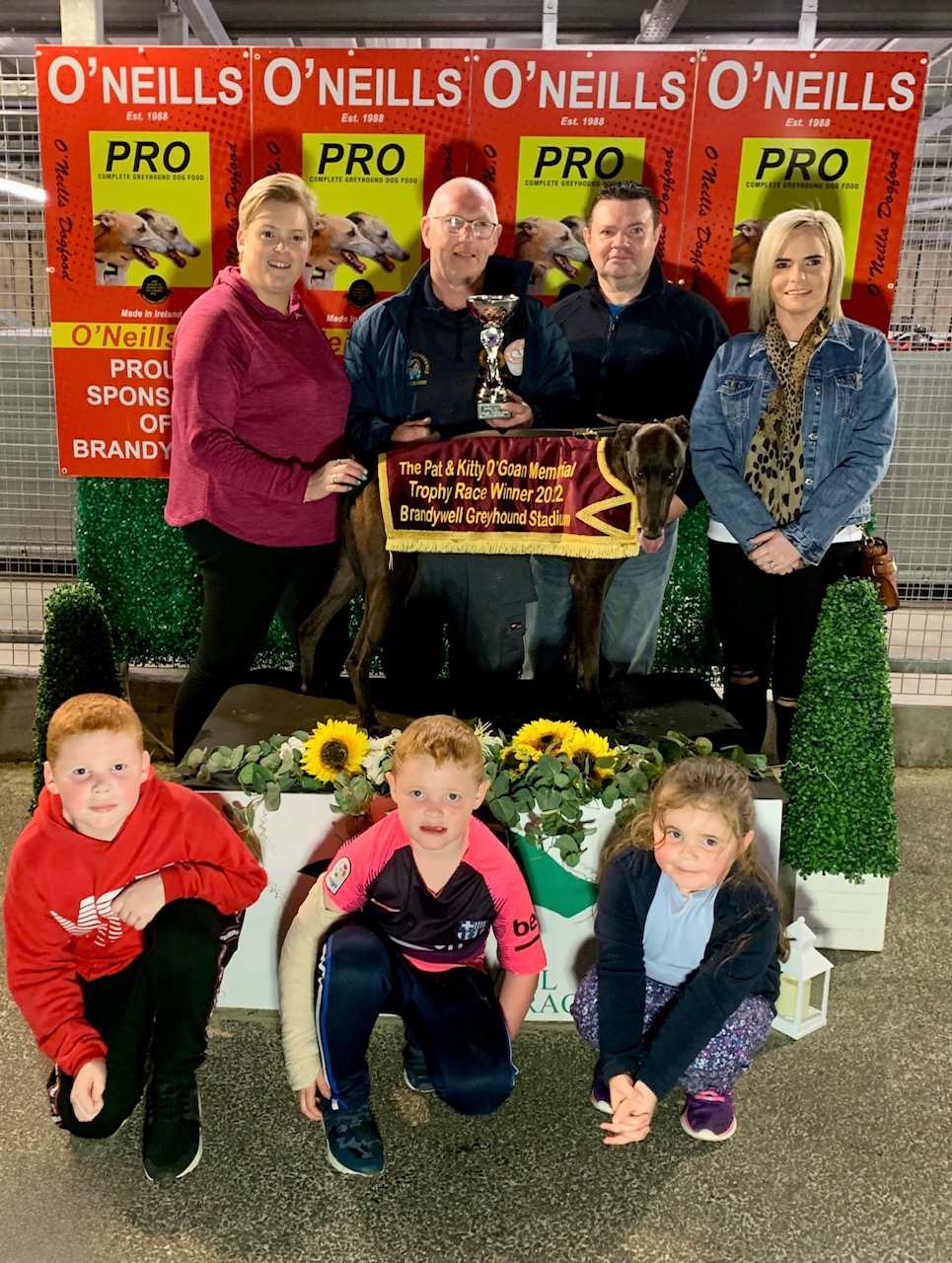 He is an ex-Cork hound with a meagre strike rate of 1 win from 20 starts prior to this race, but his attitude and performance could not be faulted on Monday evening and hopefully there will be more to come around the Brandywell circuit which appears to suit him.

It was a race with 4 wide seeds and Fortress, with the advantage of the trap 6 box, took up the early lead. Jetson was racing from trap 3 but had room up the middle of the track to navigate a path into second place as they emerged from the second bend.

Jetson showed good pace going into the third bend and swooped through on Fortress’s inside to take up the lead, but Fortress was finishing strong up the home straight and it took a determined effort by Jetson to hold off his advances by 0.5 lengths in a fast 27.87 for owner Adrian McGhee and trainer Niall McGhee.

Jetson had won his first career start in a sensational 21.23 over Dundalk’s 400 yards and given a clear passage he will always be a force to reckon with in distances up to 500 yards. 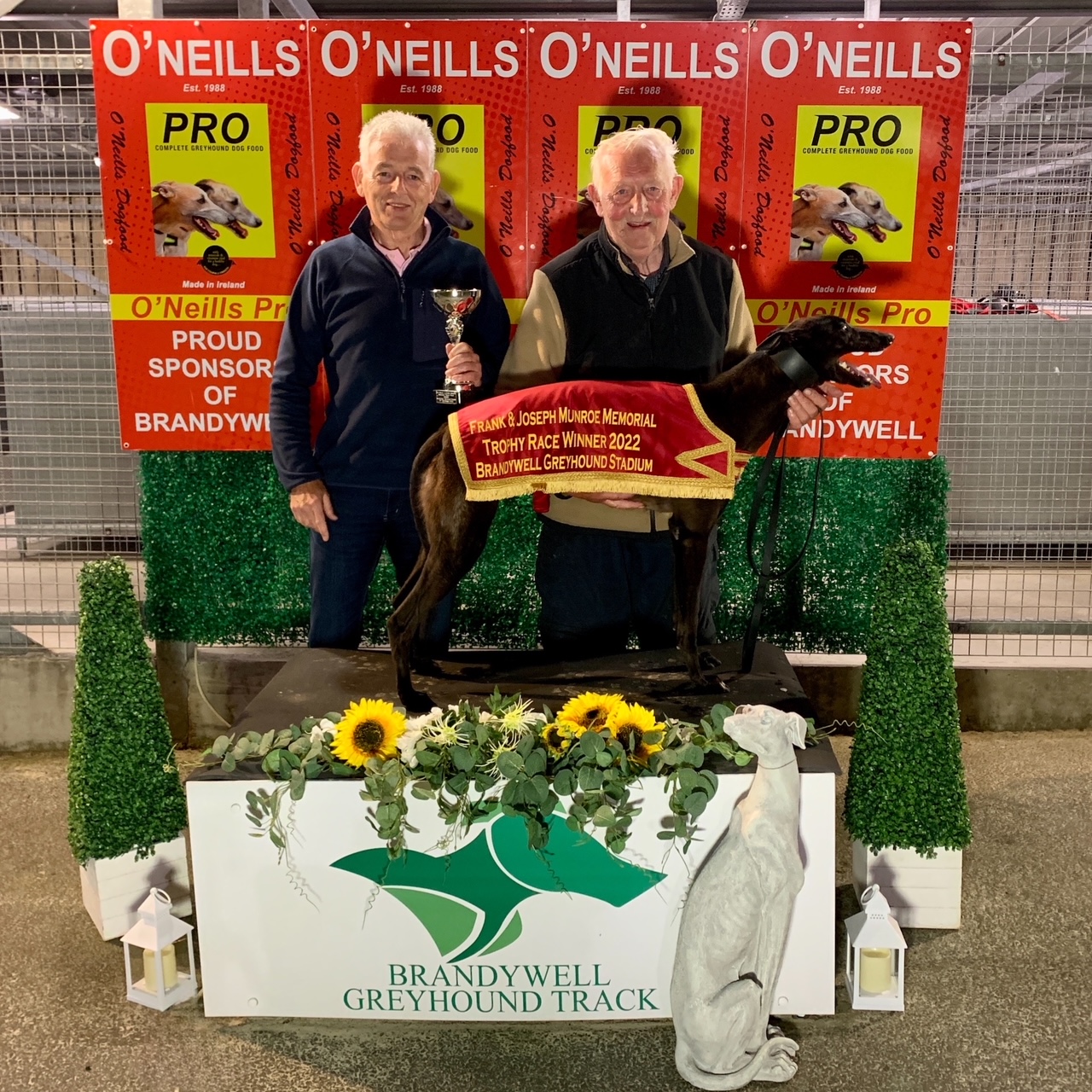 Diane and her family are well respected at the Brandywell and she was given a warm welcome by all those who knew her. A paw perfect performance from Toolbox Talk (Ardnasool Jet x Finulagh Limini, Jul ’20) from the 6 box put the race beyond the reach of the others from trap rise. He opened up 7 lengths on the field to win in 27.87 for Cathal McGhee and now has 2 wins from 6 races.

Titanic Socks recovered well from early trouble to take second place and given a trouble free run, should be winning soon. The winner also received a bag of O’Neills dog food sponsored by Andrew O’Neill.

The O’Goan family sponsored the sixth race, the Pat & Kitty O’Goan Memorial Trophy Race over 500 yards. Eamon, his wife, children, sisters and extended family were all in attendance at the first running of this race in memory of his beloved parents.
The prize money was boosted and there was a presentation jacket and trophy for the winner.

It was the sponsor of the Bart Teague Memorial Oaks 2022 that won this race with Old Fort Tune (Ballymac Best x Droopys Scion, Jan ’21) who secured a clear run from trap 2 and unleashed the potential she had shown when winning at Limerick in 29.23. She ran out a 2.5 length winner in 27.83 which was the fastest time of the night and whilst Tony Teague’s ‘Tune’ did not shine in the Oaks, she certainly has an exciting future ahead. Given her young age, we may see her in next year’s Brandywell Oaks.

Beanos Snowflake (Dorotas Wildcat x Droopys Lagoon, Jun 20) ran an almost identical race to Old Fort Tune from the 2 box in the next race, the Frank & Joseph Munroe Memorial Trophy Race, kindly sponsored by Stephen & Leontia Munroe who have been great supporters of the Brandywell in recent times. 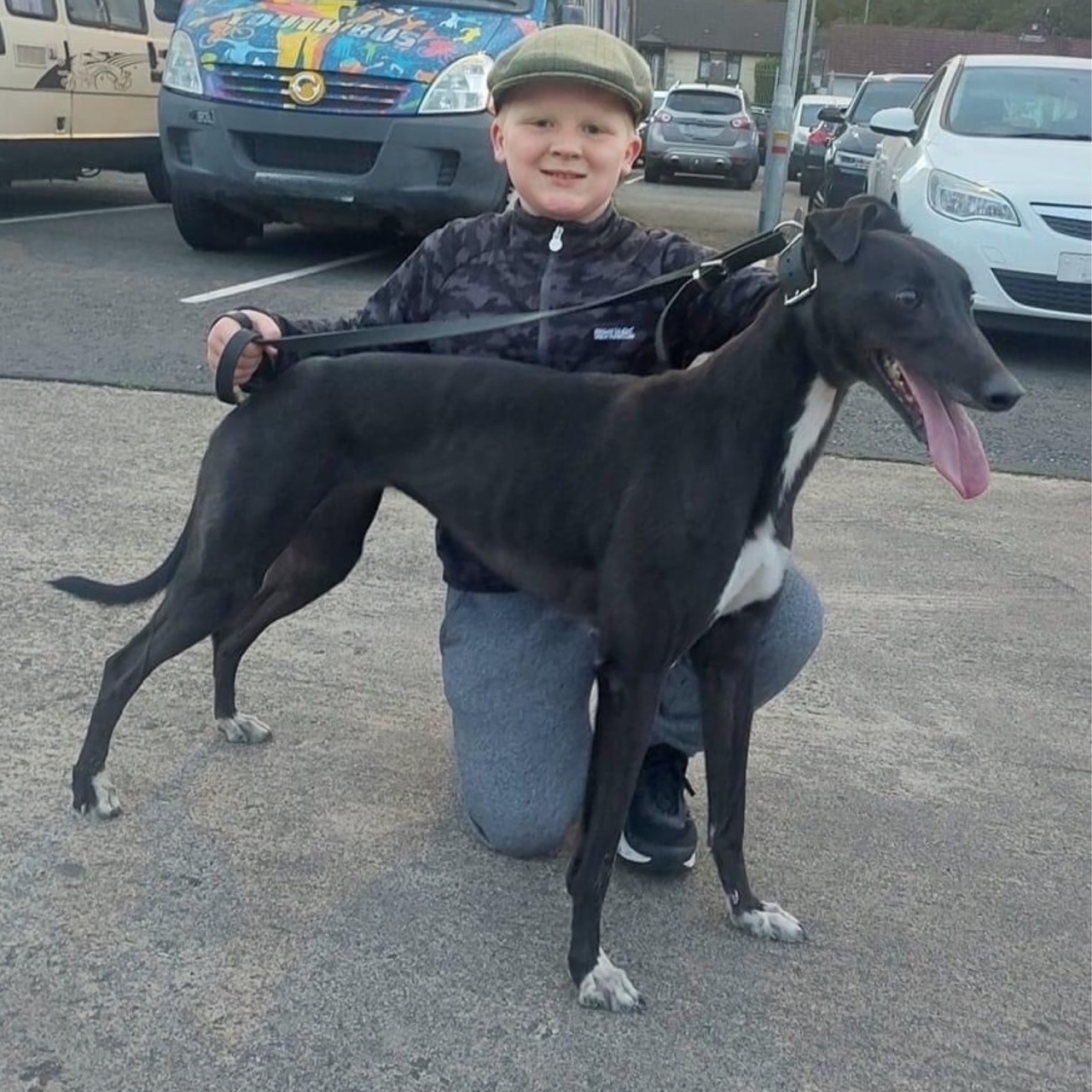 Mason Thompson with Jumpstart Jesse who was runner up in the Dungannon Kennels Sprint.

Frank & Joseph were Stephen’s father & uncle respectively and we were honoured that Stephen & Leontia chose to remember them as part of this Gala Night. Prizemoney was boosted, a presentation jacket, engraved trophy, £20 voucher and a wonderful greyhound statue all went to Colm Sweeney after Snowflake’s win.

She was fast away from traps and won by 3.25 lengths in 28.19. This was Snowflake’s second success on her thirteenth start and she picked a great night to land the spoils.

Racing was brought to a close with highly competitive sprint action in the Greyhounds Make Great Pets Race.

The sponsor added a generous amount to the prize fund and it was won by Blackstone Vic (Ballymac Best x Calzaghe Jan, Aug ’20) for Thomas Hasson in 16.80. Vic, racing from the 4 box, was hot on the heels of early leader Tip Away Summer. He cleverly took her inside at the first bend and opened up an unassailable lead to record his first career success on his fourth career start. He is another hound with an exciting future.

It was a great night’s racing and the Bonner family sincerely thanked everyone who made the evening possible, the owners & trainers, family & friends, sponsors and the Brandywell Greyhound Racing Company and their team who very kindly hosted the event.