'This is the strongest we've been!' 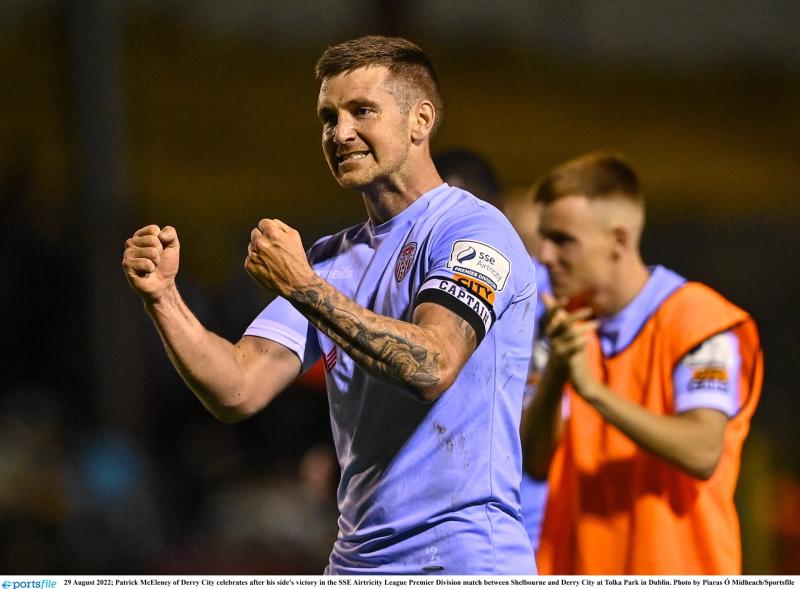 Patrick McEleney believes that Derry City are in prime position to finish the season well, with the squad the strongest it has been at any stage this season.

Ahead of tonight’s game against UCD, the club captain has hailed the never-say-die spirit in the squad, which was again evident in Monday’s win at Shelbourne, where Ran Graydon scored a 91st minute winner to take the Candystripes into second place in the Premier Division.

It was the sixth time this season that Derry have scored beyond the 90-minute mark and McEleney insists the team will never give in regardless of the circumstances.

“We kept going,” he said. “We were desperate to win, as we are every week. I think we go to the death every week. I can’t think of any games when we weren’t pushing towards the end to try and win games so it’s a huge quality to have.

“It was a huge win and we definitely deserved it. We got over the line so we were well-pleased. You can call it luck or call it finishing touches, but we’ve hit the bar, the keeper has made a couple of saves and one is bouncing around on the line and it gets cleared a couple of times, then we get our goal with a bit of luck, but we deserved it.”

City sit above Dundalk on goal difference with one game in hand over the Lilywhites, while they remain seven behind leaders Shamrock Rovers having played a game more. Nine league games remain in what has been a memorable season already, but with an FAI Cup quarterfinal against the champions still to come, 2022 could yet prove to be something special.

“Honesty, we’re not really speaking about where we’re finishing,” McEleney said. “We’re just going game by game and trying to take each game on its merits and trying to win. Obviously, you have your own targets before the season starts and we were a new team. We still are a new team; we’ve made a load of signings in mid-season so we’re still new and we’re still trying to figure each other out and it’s a good start. We’re doing well and there’s still more to come.”

City are strong favourites to beat UCD tonight, with the Dublin side losing 7-1 on their last visit to the Brandywell back in April. But McEleney insists that no result can be taken for granted.

“As I’ve said loads of times, we are expected to win games all the time against teams in the lower half of the table, but it doesn’t always work out like that, he continued. “It’s always very tough, everyone’s fit and everyone’s ready and they always set up well so it will be another tough game. We just have to get the fans behind us; our fans have been brilliant in the Brandywell so hopefully we can do the same.”

Monday’s win against Shelbourne continued Derry’s incredible record in Dublin this season, which now stands at seven wins from eight games. It is the club’s best record to date in their League of Ireland history. For McEleney, the club is becoming stronger with every game.

“The Dundalk game where we drew is the only game this season where we were backs to the wall in the second half. We completely dominated the Shamrock Rovers game, we completely dominated apart from the free kick, and at Shelbourne it was the same. I think it’s just been the story of our season; it’s just keeping clean sheets and putting the ball in the back of the net. Our build up plat at times is good to watch and I know fans will want us to get it forward a wee bit quicker at times, but trust me, this will work.

“This is the strongest we’ve been, no doubt. I think it’s evident in our performances no matter who we’ve played, we’ve gone out and had a go. It’s not just as easy as standing here saying let’s win games, but getting over the line, as we’ve seen tonight, is not so easy sometimes.”