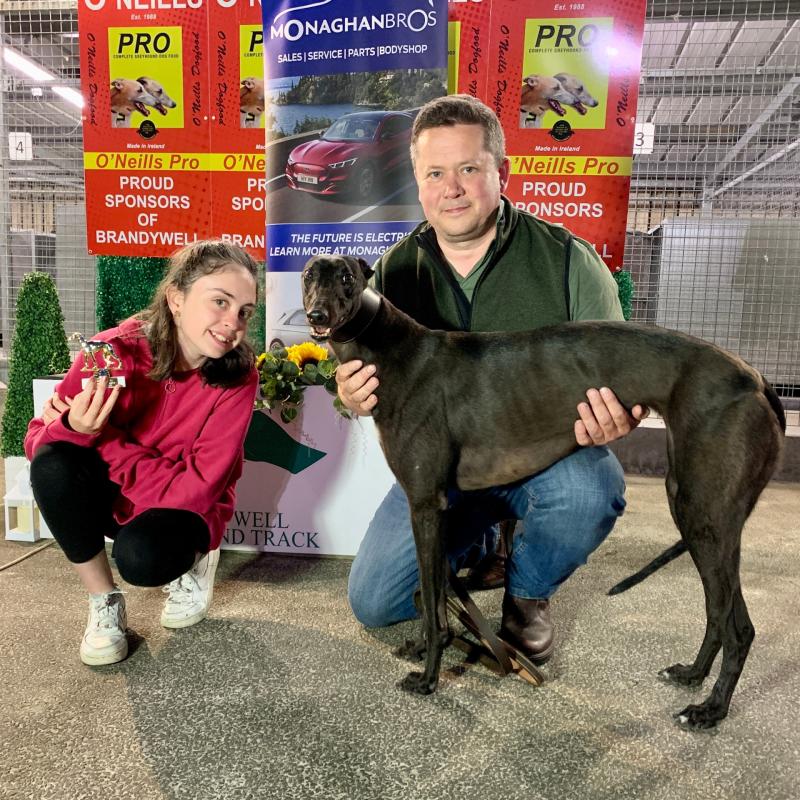 There was great weather and a really great turnout for Oaks Final Night at Brandywell.

We had an all sponsored race programme and valuable prizes on offer. The management and supporters of Brandywell Greyhound Track were particularly honoured that the Teague family had chosen this track in which to sponsor the Oaks in memory of their beloved Bart Teague who sadly passed away on 25th July 2021.

Bart loved a night at the dogs and his son Tony said that ‘Brandywell combined the friendliness, banter and the odd tall story that summed up what racing was all about’ for his dad.

For the second consecutive year, the Westwell Syndicate and Sean Burke at Newpark Stud showed their support for greyhound breeders at the Brandywell by sponsoring a service to Magical Bale for the winner of the Oaks.

This was very much appreciated as Magical Bale is a highly sought after sire that has had an incredibly successful year. He sired the winner of the 2022 Star Sports & TRC English Greyhound Derby, Romeo Magico, at Towcester.

At semi-final stage, Kenyan Flame (Laughil Blake x Wee Tee, Oct ’20) was the fastest of all those going into the Bart Teague Memorial Oaks final.

As the lure passed the boxed, the field broke fairly evenly, but Flame, racing from trap 4, had just enough pace to take up the lead going around the first bend.

From there she built up an unassailable lead to win by an impressive 7.75 lengths in 29.08 for owner Sean Hughes. It was a terrific effort from a bitch that has now won 5 from her 11 races and she lifted the £800 prizemoney, velvet presentation jacket, engraved trophy and the service to Magical Bale. Ballymac Julia ran a very good race for Lenny O’Hanlon to finish second after not getting a clear run around the first bend and last year’s finalist, Gotheratlast, claimed the final podium position in third place for Tiernan McGhee and trainer Niall McGhee.

The Magical Bale Consolation Oaks final was much closer affair, albeit Fridays Arista (Droopys Sydney x Tyrur Kerri, Jan ’20) led from trap to line for Paul Whyte. Whilst Droopys Katie came with a late flourish to finish second, just 1 length, behind the winner, she never looked like she was finishing strongly enough to get past Arista.

Hailing from the Tyrur Pearl damline, Arista has now won 5 of her 19 races and clocked a decent 29.48 when landing this final. Tyrur Pearl also appears in the 2010 Irish Derby winner, Tyrur McGuigan’s pedigree so Arista ticks plenty of boxes when considering future options for her.

Racing got underway with the sponsored ‘Brandywell Greyhound Supporters Group, Members Only’ sprint. Abrakebabra Soo (Ardnasool Jet x Droopys Josie, Aug ’20) was smartly away from trap 4 for the Cheap As Chips Syndicate and trainer William Berry.

As they approached the bend there was some crowding and Soo emerged from the pack with a lead that he comfortably held to the winning line. He recorded 17.49 and most importantly his first career success on his fourth attempt. This was also the first winner from this 2020 litter by Droopys Josie.

Drawn trap 1, Bounty paced up well to the bend and took advantage of the space on the inside of the early leader Curlew Bubble to take up the lead and she ran on well up the home straight finishing 2.25 lengths ahead of her nearest competitor in a time of 16.84 to land the Sean Conway Kennels Sprint.

It was an impressive racing debut for Bounty and adds to the first time out victory of litter brother Degreatdefector who clocked a very fast 28.61 at Waterford. This looks to be a very promising litter. 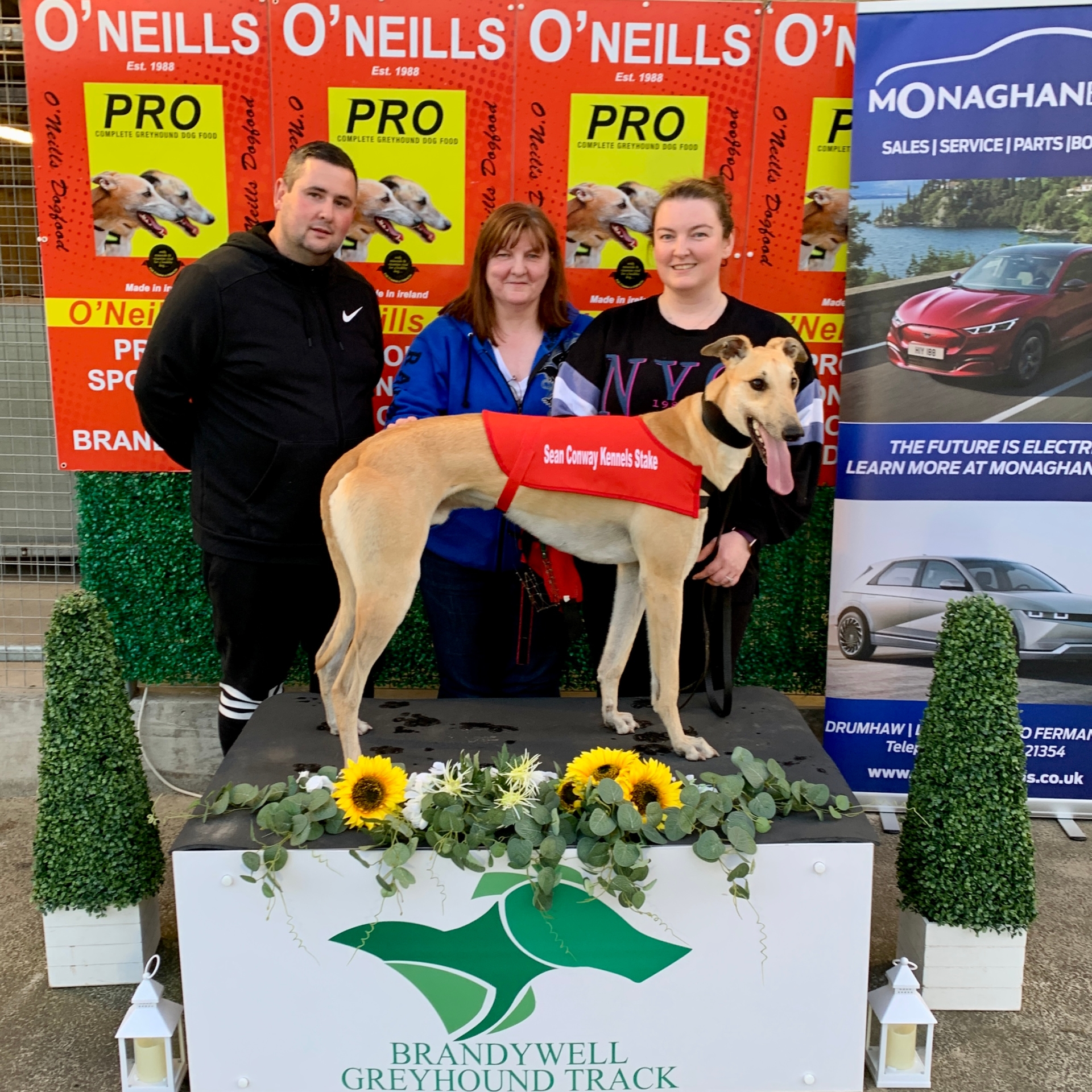 Don Vincenzo (Crafty Gonzalo x Meghans Diva, May ’20) has been knocking on the door on all of his career starts and he got his reward in the third race, the Sean Conway Kennels Sprint.

He was moderately away from trap 2 and forged a path through the field at the first bend where most of the runners were squeezed for room. Thereafter, Vincenzo was unchallenged and stopped the clock in 17.37. It was a determined run and deservedly notched up the first success on the track for this litter.

Monaghan Bros from Lisnaskea also sponsored the sixth race on the card. It was a 500 yards race and Lakeside Model (Tyrur Big Mike x Newquay Delight, Feb ’19) was resilient in claiming victory for Shaun Eastwood.

We featured Model, aka Pete, a fortnight ago in the Derry News as this was Shaun’s first greyhound and he is obviously well able to keep Pete fit and contented whilst living in the family home.

Model had about 5 lengths to make up on the early leader Fifebouy Shandy as they approached the third bend but he kept up his momentum to finish 0.5 lengths ahead of Shandy in 28.16.

The biggest cheers of the night were heard in the Sean Conway Kennels 500 when Old Fort Mickmac (Crash x Old Fort Dakota, Oct ‘20) surged into the lead coming out of the second bend and went on to put 7.5 lengths between himself and the field at the winning line.

He recorded a fast 27.94 and went into a few notebooks since this was only his third career start. Mickmac is owned by Tony Teague and the crowd was delighted to see Tony get a winner on what was a very special night for the family. 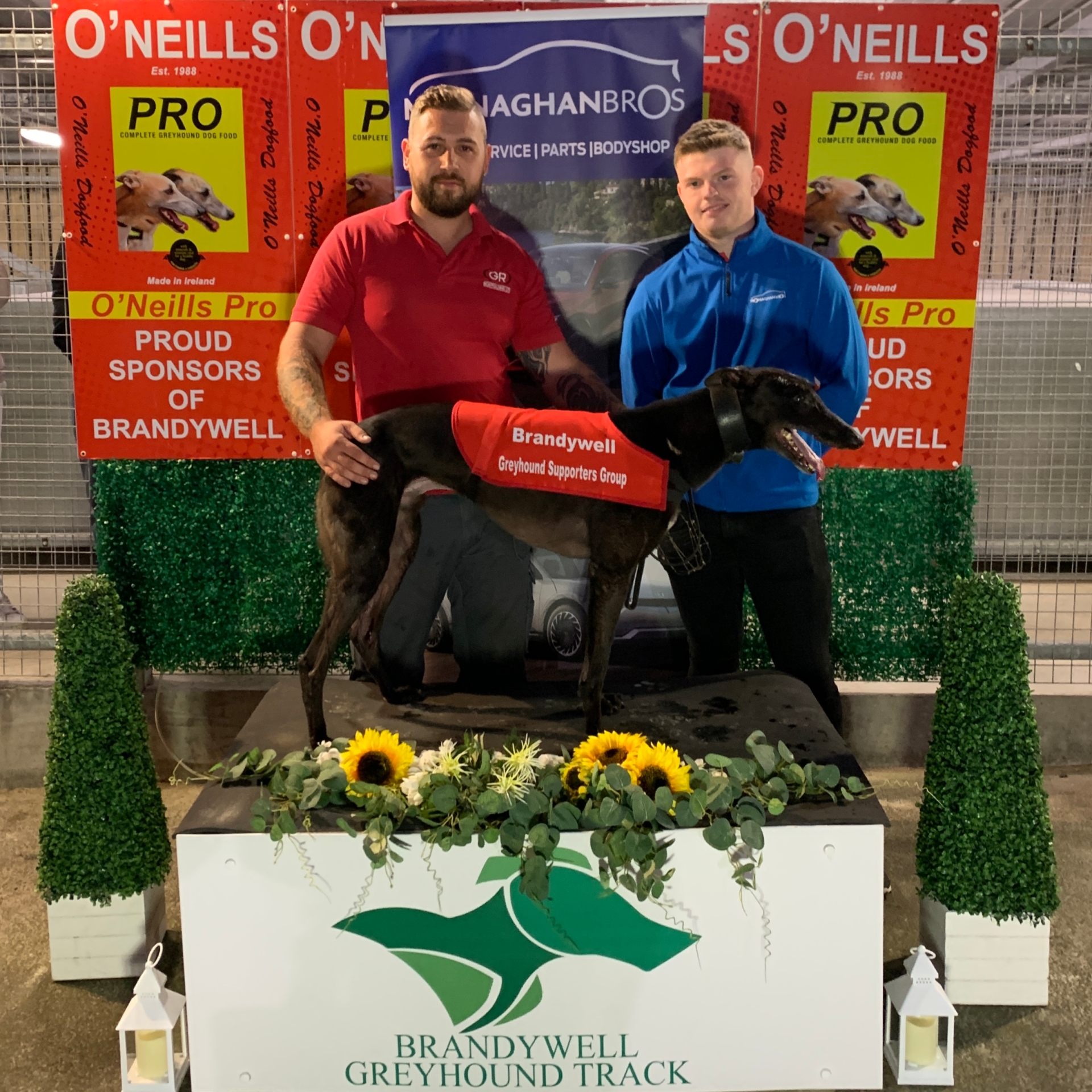 He made it 3 wins in a row as he showed searing pace from the traps into the first bend. He was paw perfect and recorded a fast 16.62 to land the sponsored H2 Buildings UK Trophy race. Drum now tops the Brandywell league table for ‘Dogs with most wins 2022’ with 6 career successes notched up so far.

It was a terrific night’s racing as the racegoers admired the canine athlete’s performances.

There was a great atmosphere at the track as the greyhound community all pulled their fundraising efforts together again through a raffle with great prizes sponsored by the Westnera Arms Hotel, H2 Buildings UK and The Butcher, Armagh.

The proceeds of which went towards the Odhran Edgar fundraiser as was requested by the Teague family. It was a generous and thoughtful gesture and one which by all accounts summed up Bart Teague’s character.

It is a legacy that clearly runs through his family.