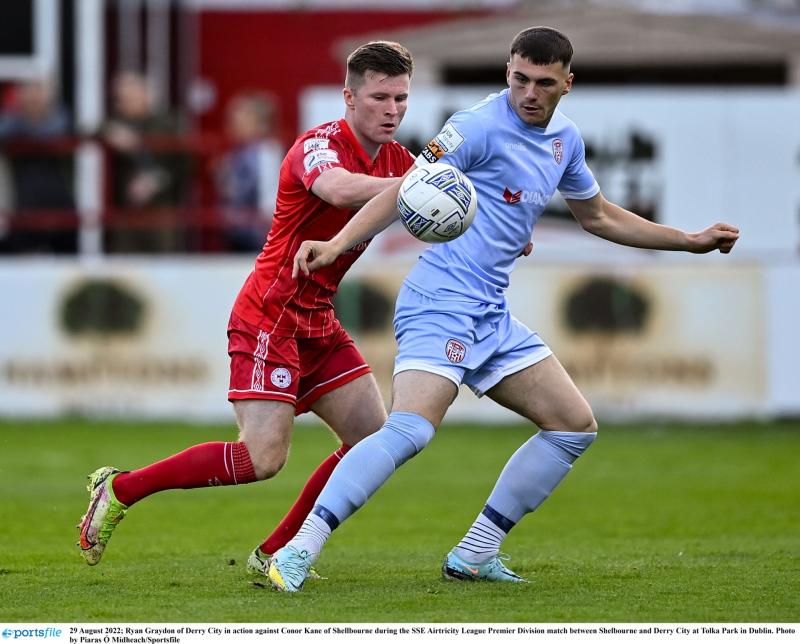 Derry City are up to second pace in the Premier Division as a last-gasp goal from Ryan Graydon earned a deserved win at Shelbourne at Tolka Park.

With Dundalk losing at Sligo Rovers, a dominant Derry needed to put any one of several chances away, but it looked as if they were out of time until Graydon’s effort took a massive deflection to take it into Brendan Clarke’s net in the very last minute of normal time.

Patrick McEleney came so close to scoring the quickest goal of Derry City’s season after just 15 seconds on Monday. Straight onto the attack from kick-off, Brandon Kavanagh led Derry forward and while his low cross was cleared, it came straight to the City captain who took aim from 20 yards and curled a shot just wide of Brendan Clarke’s post.

City were attacking in numbers when they got the chance, and another chance came their way on 15 minutes with McEleney laying the ball into the path of Ciaran Coll, and his piledriver at goal had to be tipped over and behind by Shels’ goalkeeper Brendan Clarke.

The home side were also adamant that Diallo should have been red carded on 36 minutes after the City midfielder challenged Lunney, and dived in off the ground in doing so. Fortunately for Derry, referee Rob Harvey produced a yellow card only, with Diallo certainly give a reprieve for what looked like a dangerous tackle.

Derry City should have been a goal up within three minutes of the restart. Ciaran Coll picked out the run of Joe Thomson in behind the Shels defence and the midfielder picked out James Akintunde unmarked in the middle, but the striker could not get the power he wanted on his shot and his effort was too close to Clarke who saved.

Duffy then got involved for the first time and he picked out Akintunde unmarked in the middle of the goal, but again Clarke was there to deny Derry, somehow smothering the ball when it seemed certain the striker would score.

Time was running out for Derry, but no sooner had the fourth official held up the board indicating four minutes of added time than Graydon went on another run and shot for goal, with his effort taking a massive deflection off Luke Byrne to take the ball past Clarke and into the net to spark scenes of wild celebration amongst the City players, supporters and bench.