Three draws in a row for Candystripes 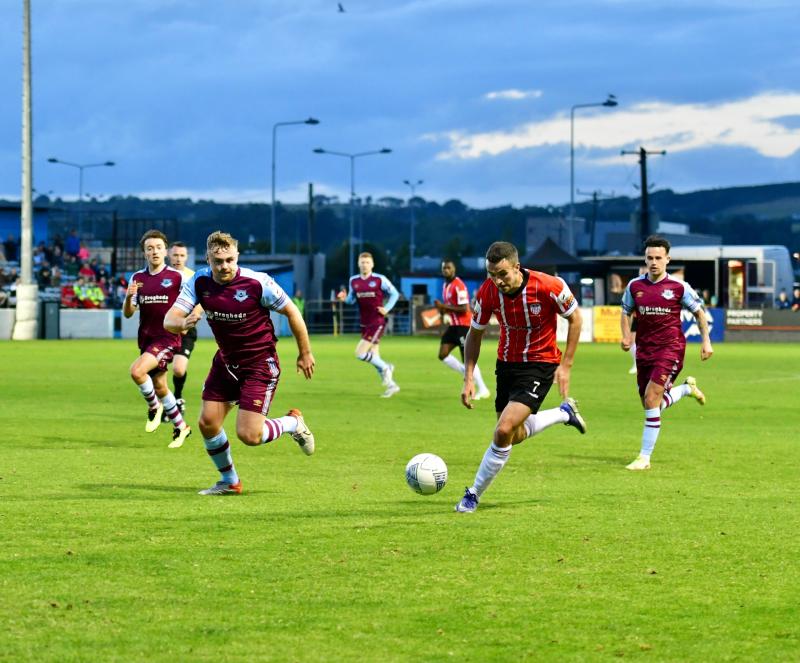 Michael Duffy made his first start for Derry City. Pic by Kevin Morrison.

Derry City were left frustrated by Drogheda United again as they could only leave Head in the Game Park with a point.

It is ow three draws in succession for Ruaidhri Higgins’ men who led at half time thanks to James Akintuntunde's goal. City could not build on that lead in the second half and Dayle Rooney’s sensational equaliser gave the home side a share of the points.

Patrick McEleney almost gave Derry the perfect start after just three minutes. The City captain picked up the ball in midfield and drove forward ad with no Drogheda player closing him down, he tried to place one past Colin McCabe into the corner, but the ball just missed the target.

In a bright opening, City really should have taken the lead on six minutes when Georgie Poynton inexplicably passed the ball right to Patching just outside his own penalty area. The City talisman went through on goa, and tried to side-foot the ball past McCabe, but the Drogheda goalkeeper got enough on it to turn it over the crossbar and behind for a corner.

The breakthrough came on 39 minutes courtesy of a classy finish from James Akintunde. Cameron Dummigan won the ball from Evan Weir on the right, and fed it low into the area, where Akintunde cleverly turned past Keith Cowan to set up the shot, before placing it perfectly beyond McCabe into the corner of the net.

Drogheda came out strongly in the second half and equalised on 53 minutes. Connolly gave away a free kick 30 yards from goal and Dayle Rooney curled a picturesque free kick right into the top corner to make it 1-1.

Despite that disappointment, Derry should have been back in front almost immediately when Duffy put Graydon through on goal, but again McCabe frustrated the visitors with a good save to turn it behind for a corner.

The game was now becoming end to end as both sides went onto the attack. Moments after Akintunde had an effort cleared off the line by Weir, Drogheda went down the other end and somehow failed to score; Maher saved a fierce effort by Weir, and the rebound came to Rooney who volleyed the ball onto the crossbar with the goalkeeper grounded.

Derry pushed and pushed in the closing stages, but they could not break through again, with a point little consolation in a game they had to win.