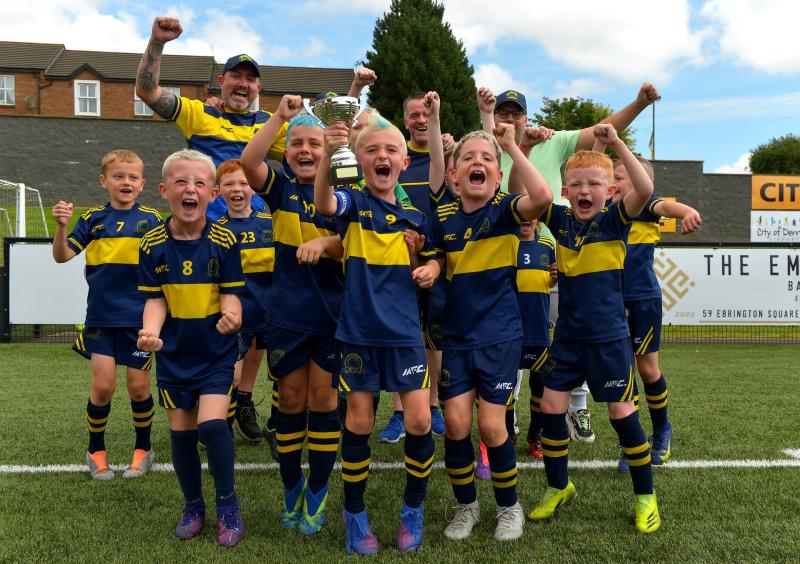 Jack Johnstone scored an incredible hat trick as Don Boscos put their name on this year’s U8 trophy after a memorable game at the Brandywell.

The young striker was in his element as he produced a masterclass of finishing to see off a spirited Tristar in one of the best finals of the day on Friday.

Tristar were on top early on and created a number of chances with Corey Miler shooting just over before he was denied by a fine save from Boscos goalkeeper Kayla Starrs.

Young Miller seemed determined to make his mark on this final however and he would not be denied, as he found the corner of the net with a brilliant low shot to give his team a 1-0 lead. It was a deserved goal for Tristar who had started the game extremely well.

Don Boscos’ response was superb, as the young players rose above the disappointment of conceding to level within two minutes. With Luke McGilloway battling hard in midfield and Liam McCallion working hard in attack, the tide started to shift and despite denying the striker with a good save moments earlier, there was nothing that Logan Fisher could do when the ball fell to Jack Johnstone just a few yards out and he sent the ball underneath the goalkeeper to make it 1-1.

The game was end to end and after Fisher denied Johnstone a second goal, Tristar came so close to restoring their lead when a fierce effort from Aidan McDevitt flew just wide of the target.

It was Boscos who then took the lead thanks to an imaginative effort from Johnstone, who caught everyone out after receiving the ball from a short corner, shooting directly into the net when everyone was expecting a cross.

Boscos then ended a memorable first half by scoring a third, when Liam McCallion showed extraordinary composure in front of goal to sidestep the goalkeeper and coolly send the ball into the empty net to put his team in charge of this cup final.

Liam Doherty worked extremely hard to create a shooting opportunity in the final moments of an excellent first half, but he was denied by the impressive Starrs in the Boscos goal, who saved well again.

Corey Miller and Liam Doherty were doing everything to make something happen for Tristar in the second half, but everywhere they looked, Luke McGilloway was in their faces, bravely blocking shots and producing big tackles at key moments.

Tristar to their credit kept going, and they gave themselves a real chance when the hard-working Doherty pulled a goal back, finding the net with a brilliant effort from distance.

Tristar came so close to equalizing when a shot from Miller deflected off a Boscos defender, but Starrs kept her eye on it the whole way and saved on the line.

The win was then secure when the superb Johnstone, who was working as hard defensively as he was in attack, found the corner with a powerful drive to complete his hat trick, bringing great joy and plenty of relief to his team mates and those cheering on Boscos.

Tristar had one final chance to get back into it in the very last minute when they were awarded a penalty, but the brilliant Kayla Starrs saved a penalty from Ryan Curran, just moments before the final whistle went to secure a fantastic and memorable win.