Local side too good for Wythenshawe at the Brandywell 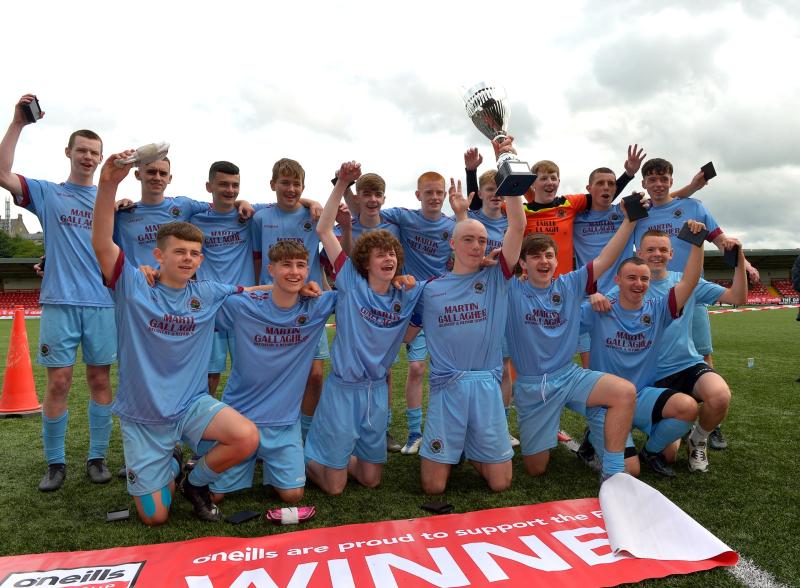 Institute completed the remarkable feat of going through Foyle Cup week without conceding a single goal as they were deservedly crowded U16 champions at the Brandywell.

A fantastic week of football action concluded with the U12, U14 and U16 finals at the Brandywell on Saturday, and it was ‘Stute who had the final say at the end of a tournament which featured 455 teams, 126 officials, thousands of goals and another huge boost for tourism in the city.

Institute took control of this final early on, with a goal after just four minutes helping them on their way. It was straightforward but clinical piece of play from ‘Stute which opened the scoring with Ruairi Conaghan breaking in from the right and crossing low for Sam Dougherty to sweep the ball into the net from six yards.

A second goal seemed inevitable such was ‘Stute’s dominance and it duly arrived on 19 minutes. A great ball from Dougherty split the Wythenshawe defence and Aaron McLaughlin went through on goal. His first effort was brilliantly saved by Carr, but the goalkeeper could do noting as the rebound came right back to the striker, and he hammered the ball into the roof of the net to make it 2-0.

Wythenshawe were barely a force in the first half overall, and it got even worse for the English side when defender Jake Borthwick was shown a straight red card for a high challenge on Brandon Crockett.

The spirit went out of Wythenshawe as the second half progressed with ‘Stute well on top, and the third goal duly arrived when Tommie McLaughlin dispossessed a defender and set up Callum Ming for an easy finish to complete a brilliant week on a high for the Drumahoe team.