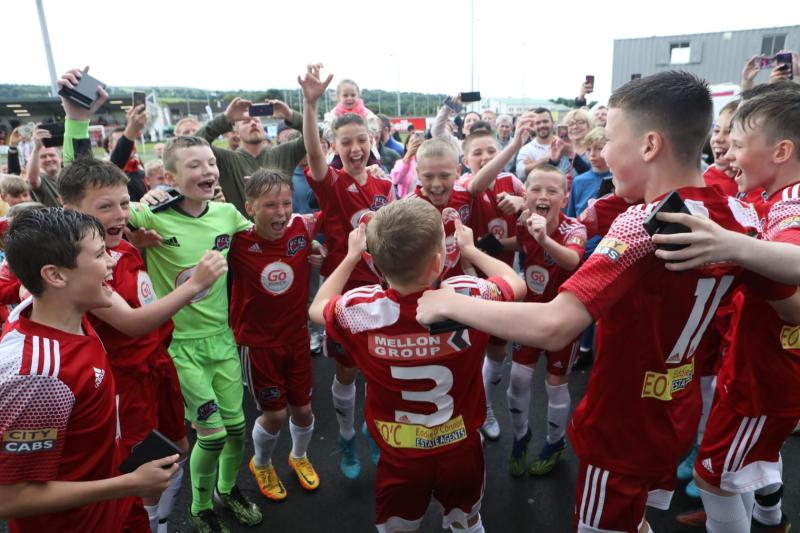 Maiden City players celebrate with the U12 trophy. Pic by Tom Heaney, nwpresspics

Maiden City held off an incredible fightback from Coleraine to be crowned this year’s Foyle Cup U12 champions.

This final looked to be dead and buried with Maiden City 4-0 up early in the second half, but Coleraine refused to give up and fought their way back into the game spectacularly to set up a very tense finale.

Northern Ireland Ladies manager Kenny Shiels was in attendance to watch his grandson Luca Kearney in action for Coleraine, just days after returning home from leading the international team to the first ever European Championships in England.

There was barely 90 seconds on the clock when Michael McColgan burst into the Coleraine area from the left and placed a lovely ball right across the face of goal where Jay Curry arrived to force the ball over the line from close range.

It was 2-0 within seconds as Coleraine were left stunned. Aedan Smith won the race to the ball just inside the penalty area and he was brought to the ground by George McClean and referee John Crossan pointed to the penalty spot. Smith took the ball himself and sent goalkeeper Tommy Bustard the wrong way to give his team the perfect start to this cup final.

There was nothing that Coleraine could do as Maiden City made it 3-0 after 10 minutes with arguably the best Foyle Cup goal scored at the Brandywell all week. The lively Smith won a free kick on the left side of the Coleraine penalty area, and he took it quickly, finding Kai Anderson in support.  Anderson took one touch, looked up, saw a packed penalty area, but went directly for goal and sent a beautiful dipping shot over the head of Bustard into the top corner to put Maiden City in complete control.

Maiden City got their fourth goal nine minutes into the second half. The pressure from the city side was intense and McColgan broke into the area to shoot, and although Bustard pushed the ball away, the ball fell to Smith who knocked the ball into the open net for 4-0.

Coleraine to their credit, kept going in the face of an impossible situation, and they got a goal to give themselves some hope with ten minutes remaining. George McClean had a go from distance and although Gibson was well behind his shot, the ball spilled out to Keelan Walker, who showed tremendous composure to turn inside and fire the ball into the roof of the net.

With five minutes to go, Coleraine made it very interesting as they pulled another goal back, and it was a special moment for Shiels and Coleraine manager Oran Kearney, as Luca turned in Conor Wilson’s cross to give himself a Brandywell goal.

Coleraine then threatened the most remarkable fightback as Wilson lined up a shot from 20 yards and sent the ball in off the post into the corner to make it 4-3 with three minutes remaining.

Coleraine had one final chance to save themselves when they won a free kick right on the edge of the penalty area, but Carter Maguire sent his effort over the crossbar.

The final whistle followed soon afterwards and the players in blue crashed to the ground in despair whilst Maiden City players celebrated a tense, but deserved victory.