Akintunde-time! Derry City striker is statistically the most dangerous in Ireland! 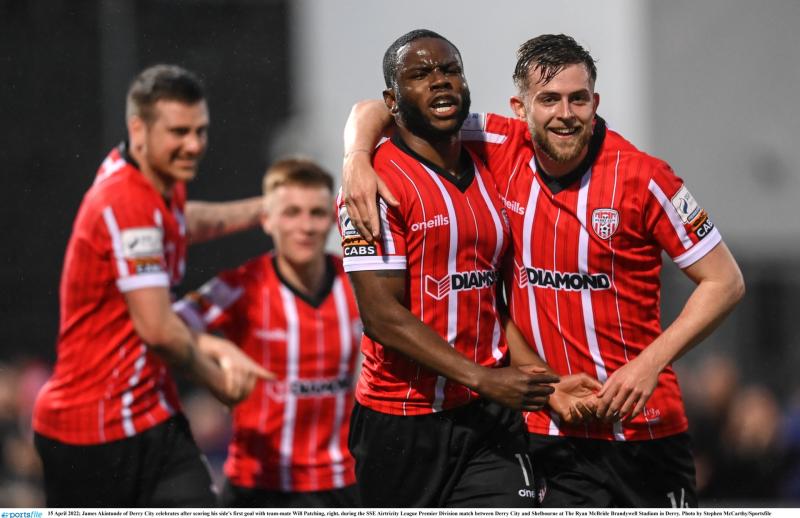 If one man was going to score a late winner at Finn Harps on Sunday past, it was always going to be James Akintunde, who is statistically the most dangerous player in Ireland after the 90-minute mark.

Since coming to the League of Ireland in July 2020, Akintunde has scored 5 goals in or after the 90-minute mark, the latest of which earned Derry City three points at the home of their biggest rivals. The only player to have come close is Danny Mandriou, who has scored three in the same period.

Akintunde’s bullet header was his 12th goal for Derry City, and arguably his most important, given the circumstances in which the team found themselves in.

Having just returned from Latvia two days earlier, City were struggling in scorching heat in Ballybofey and found themselves a goal down heading into half time. Despite an improved performance in the second half, time was running out with nothing to show for City dominance until Ryan Graydon’s equaliser set up a grand finale.

In the third of seven added minutes at the end of the game, Will Patching’s free kick sailed over everyone to the back post where Akintunde made the ball his, heading it downward past Mark McGinley and into the net to secure a crucial derby victory.

“It felt good to get the winning goal,” he admitted afterwards. “I just have that little knack of when we get a free kick I can get on the end of it. I’ve scored quite a few headers from free kicks which is a surprise because I never used to score headers. I had a feeling that when I came on I was going to get the winner and when the free kick came in I was able to get on the end of it.”

It was a moment of redemption for Akintunde, who passed up a great chance to put City 1-0 up in Riga last Thursday. That miss ultimately cost Derry a chance at a comeback over the two legs, and it was a miss which stayed with Akintunde for a few day afterwards.

“Our first half in Riga was really good and we had a few chances, including myself, but we didn’t take them and we got punished,” he reflected. “If I score the game could go a different way, so it was a hard one to take, but the boys were good around me and the manager was good around me and they just said your chance will come, and it did come in the derby in the last minute and I’m just glad I took it.

“I always say that football has the highest of highs and the lowest of lows so when it’s going really well it’s good and when it’s not going well, it’s bad. After Riga I was quite low but it’s all about getting back to it and having a positive mindset which I did. Against Harps I had a feeling that I could possibly get a chance and wanted to take it.”

Despite claiming that he doesn’t usually score headers, three of Akintunde’s four goals this season have been exactly that, his late winner down at Bohs, a Brandywell equaliser against Dundalk and now the winner at Harps. He is developing a great habit of being in the right place at the right time.

Shane (McEleney) told me when I came onto the pitch that I was going to get the winner and I felt like I needed it after the other day against Riga,” he said. “I missed that chance but I made it right by scoring against Harps.

“We have 13 more games so it would be good to get a few more goals. We have the FAI Cup and the league as well, so we will just focus on the next game and not get too ahead of ourselves. It was a great win against Harps, but we’re not going to get carried away. We’re just going to keep our heads down and keep trying.”

Sadou Diallo made his Derry City debut on Sunday past, and Akintunde knows full well the challenge of coming to a different country to play in a new league halfway through a season.

“Obviously, I’ve been where he’s been,” he agreed. “When new players come to the team the gaffer always tells me to make them feel welcome so I was making sure he feels welcomed and al the players have been doing that as well. He came on and as you cold see he made a nig difference. ‘Graydo’ did well also, he came on and got a goal so the new signings have been brilliant for us.”