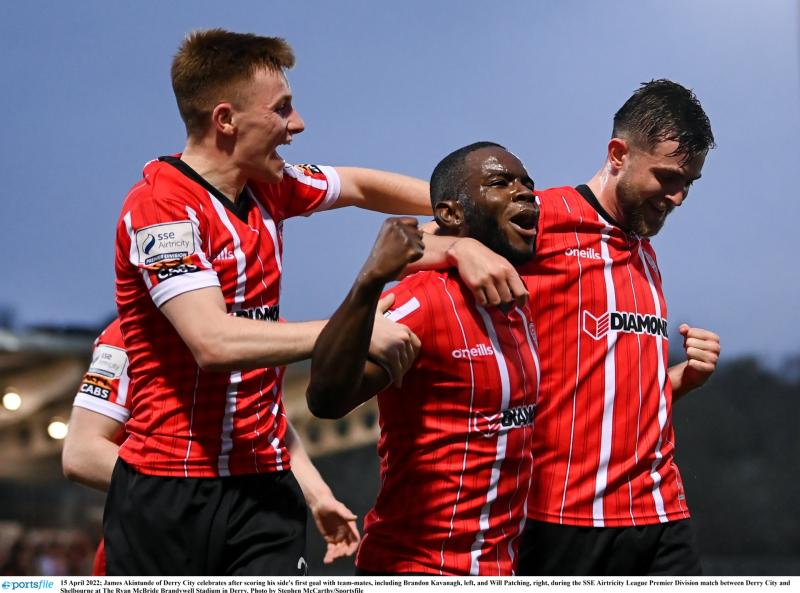 James Akintunde was the Derry City hero as he came off the bench to score a dramatic 93rd minute winner as Derry City came from behind to beat Finn Harps.

The Candystripes, just three days after playing in Latvia, somehow turned this game on its head, just when it looked as if Rob Jones’ first half goal would be enough for Harps.

In sweltering heat at Finn Park, Derry City controlled possession, making the Harps players chase all over the pitch for the first 25 minutes. But City were desperately lacking in any threat, and there was nothing to threaten the Harps goal until Matty Smith sent a snapshot just wide from 20 yards.

In contrast, Harps bided their time and stunned Derry by scoring first. It was a simple set-piece which proved Derry’s undoing with Regan Donelon’s corner kick met by striker Rob ones, who powered a header past Brian Maher and into the net.

City had justifiable claims for a penalty before half time when Matty Smith was fouled by Ethan Boyle. It looked just inside the area, but much to the disbelief of the City players, referee Derek Tomney awarded a free kick, right on the edge of the penalty area. To add to City’s growing frustration, Will Patching sent the free kick high over the bar as Harps went into the break leading.

Ruaidhri Higgins made two changes at half time, with midfielder Sadou Diallo on for his debut alongside Brandon Kavanagh, in place of Joe Thomson and Danny Lafferty. Immediately City looked more threatening, but it wasn’t until a third substitute entered the game – Ryan Graydon, that City created a meaningful chance, with Graydon heading over from Patching’s free kick.

Patrick McEleney was beginning to dictate the game for Derry City as they chased the equaliser, and he came so close to scoring with a curling effort from 25 yards, but McGinley parried it over the crossbar behind for a corner.

The equaliser finally came on 79 minutes as City finally broke through. Cameron Dummigan picked out the run of Graydon in behind the Harps defence, and the winger beat McGinley to the ball to head the ball into the net to make it 1-1. It was Graydon’s first goal for the Candystripes and could not have come at a better time.

It was all Derry after that as they pushed for the winner, and Finn Harps’ time-wasting tactics throughout cost them dearly. Referee Derek Tomney added seven extra minutes and that was more than Derry City needed. The visitors made the most of that time when Patching’s free kick into a crowded area found Akintunde at the back post, and the striker did the rest, heading down into the net to send his team back into second place.