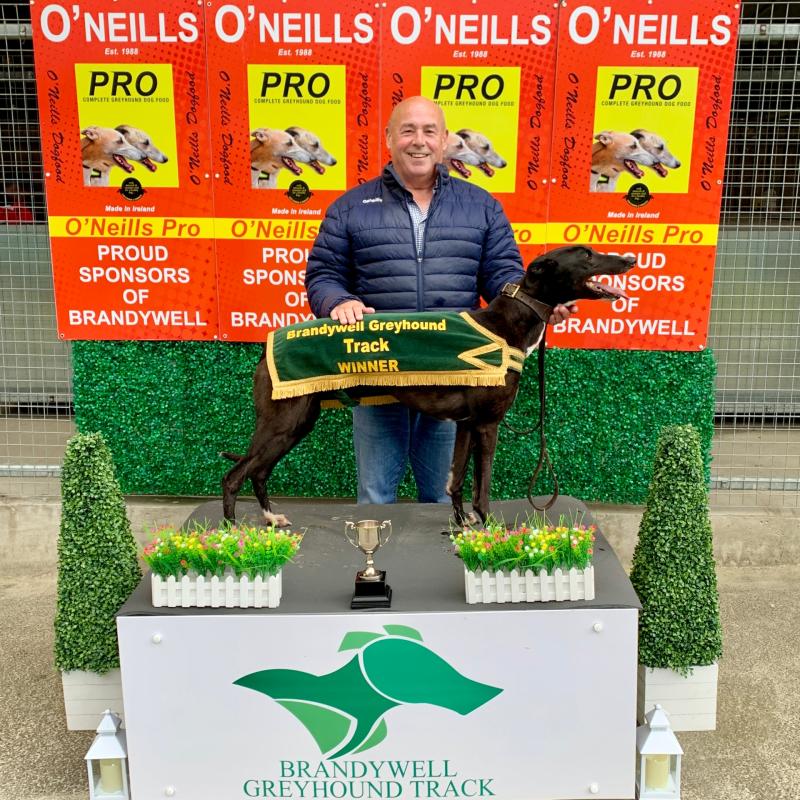 Beautiful Peggy who won the fourth race in 29.55 with Michael Feeney. Peggy’s win brought Michael’s tally of winners to 100.

Michael Feeney did not need to study the form book when he took Beautiful Peggy (Ela Ela Genie x Velvet Holly, Jun ’19) to the Brandywell on Monday evening.

Peggy, who was named after his dearly departed mother, was contesting the fourth race on the card over 525 yards. It was a competitive looking race but Michael had an air of confidence in Peggy after a little robin paid him a visit the day before the race. As the saying goes, ‘when robins appear, loved ones are near’ and Michael considered this to be a positive sign from his mother that good things were to come.

Sure enough, Beautiful Peggy showed the true grit that has seen her win 11 good quality races throughout her career. Fast away from trap 1, she bravely held her position on the inside at the first bend and drove into the lead.

Despite the field being close on her heels at the third bend, she rallied on gamely up the home straight to win by 2 lengths from Do It Stevie in 29.55.

A wonderful performance by a greyhound named after a very special lady. And, just as if it had been written in the stars, Beautiful Peggy’s win was the one that brought Michael Feeney to that long awaited and much coveted century winner milestone.

It was also a special night for the Mullan family as they got a quick fire double in the first two races of the evening. First up it was Darrens Eyes (Ballymac Best x Laurdella Jane, Apr ’20) for Willie Mullan.

Bought from the Thurles Sales last September this lad was fast away from trap 1 and won unchallenged by 2.25 lengths from Aughris in a fast time of 16.76. It was an impressive performance for only his second career start. He also won the bag of O’Neills dog food, kindly sponsored by Andrew O’Neill.

Tom Mullan’s, Rahyvira Spice, (Greenwell Hulk x Rahyvia Dream, Mar ’19) completed the family double in a similar fashion to his uncle’s first winner. She trapped fast from the 2 box and whilst challenged on the run to the first bend by Garys Emmlyn, the later took a wide course and Spice tracked the bend well to open up 3.5 lengths on her challenger as she crossed the line in 16.91. 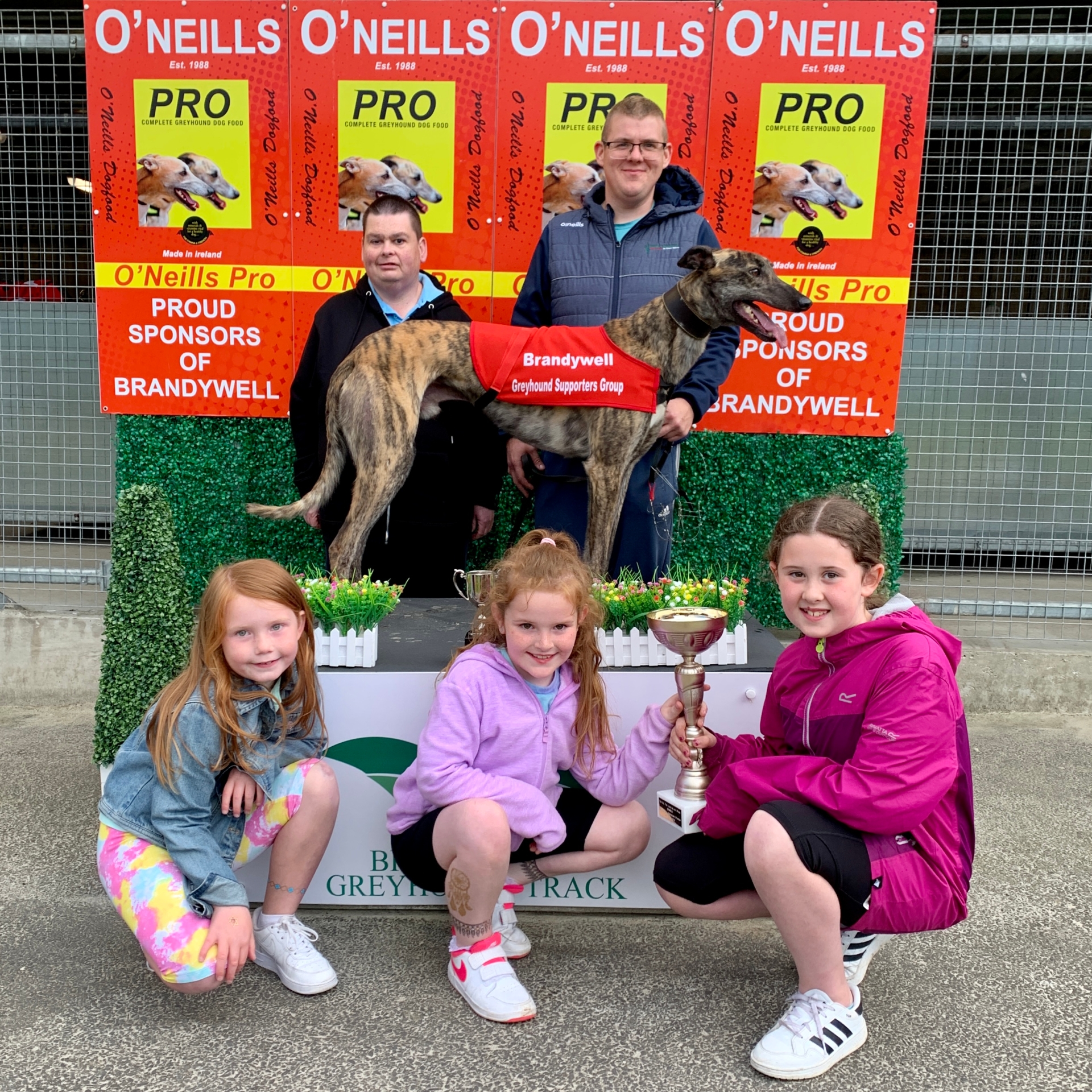 Spice had only 1 win from 19 starts in Thurles where she had been racing before moving to the Mullin’s kennels a few months ago. She has clearly settled in well with Tom and has notched up her second success in just her fourth start at Brandywell. She is one to watch for when she steps back up in distance.

Daniel Higgins has been racing Headleys Peebles (Blades Of Fire x Dooneen Cathy, Feb ’20) at Dundalk since she started racing.

The switch to Brandywell was a shrewd one and Peebles lost her maiden tag on her sixth career start in style. She had just enough pace to get clear of the field on the crown of the first bend and ran on well to win by 1 length from Baystreet Emm in 16.89.

Peebles is from a coursing bred litter and is the only one of her litter to win on the track so far. She certainly enjoyed her trip to the Brandywell.

The Brandywell Greyhound Supporters Group £50 end of month bonus (carried forward from June) was drawn to apply to the fifth race. It was won by Rathronan Syd (Droopys Sydney x Slippy Elsa, Jul ’19) who was fast away from trap 4 and although under pressure from Deeneys Delight for most of the way, he crossed the line 1.25 lengths clear of him in 29.48 for Kealan O’Kane.

There was a lot to like about his performance and his time was decent considering the classy Beautiful Peggy went a length slower in the previous race. He is lightly raced for a 3 year old, with a good strike rate of 4 wins from 20 races and could have a very good year ahead of him.

Dungannon Lilly (Azza Azza Azza x Sober Princess, Sep ’19) had started her career off at Brandywell but switched to Dundalk where she notched up a smart 21.74 win. Her return to Brandywell was a winning one in the sixth race where she was well away from trap 3 but took a bump from the dog on her inside.

She was not deterred and took up the lead going into the first bend where she built up enough momentum to win by 4 lengths in a fast 27.91 for Teresa Hurson.

She is another dog that is very lightly raced for her age with 2 wins now from 10 races and looks to have a good year ahead.

Her dam’s previous litter to Catherines Drico had excellent racing longevity with 4 of them racing over 100 times and they notched up approximately 20 wins each. The signs are looking promising for Lilly’s future. 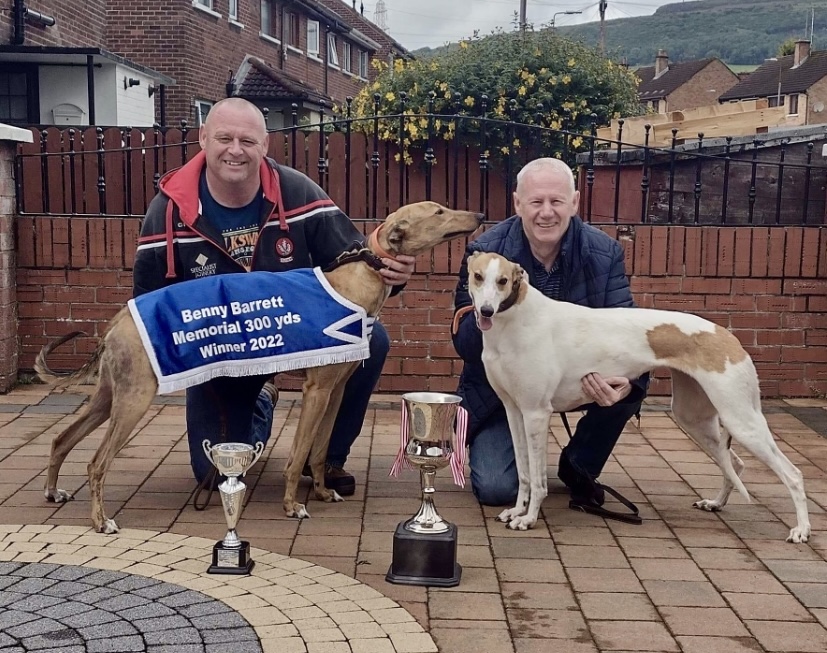 Race 7 was won by Fairyhill Run (Crash x Old Fort Dakota, Oct ’20) for owner Gerald Quinn and trainer Brian Robinson. This was only her fourth career start and it was her best effort to date. Her winning time of 17.29 would have been faster had she not been in a buckle for the same ground on the outside of the track as Old Fort Vegas on the home straight as they slowed each other down.

Fairyhill Run was racing from trap 1 and her running style suggests a draw nearer the outside might bring further improvement in her performance. She is out of the same dam as staying sensation Bubbly Cristal and hails from a terrific damline being a granddaughter of Irish Oaks runner up Badminton Girl. She looks to have an exciting future ahead.

Tip Away Summer (Droopys Buick x Jaytee Summer, Aug ’20) flew from trap 2 and the slick start was enough to put the last race beyond the reach of her competitors as she crossed the line 4.75 lengths ahead of the slow starting Don Vincenzo in a fast 16.78. Summer was racing in Tralee without success before moving to her new owner Nigel Maguire and she has now won 2 out of 3 races for him.

As the night drew to close people were still talking about how great the Track Lotto Memorial Gala Night had been the previous week. Once again, we would like to thank Thomas Hasson for his continuous efforts in organising this annual event and for all the support he provides to owners and trainers throughout the year.