Trojans’ U18 take to the new season in style 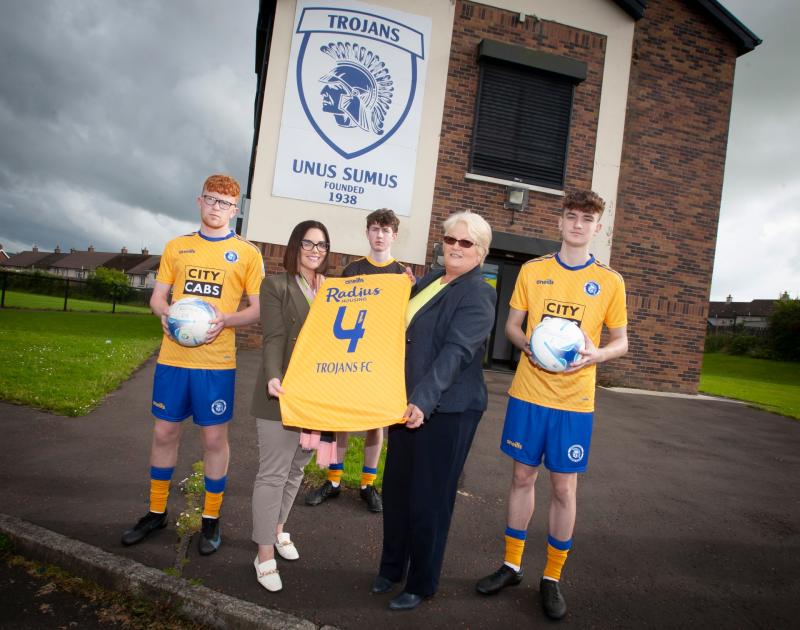 Trojans YCG will be playing in style this season thanks to kits which have been presented to the team by Radius Housing.

The new kits have been provided as part of Radius’ outreach work that they are undertaking in the local area in support of their new development of 119 new homes at Bligh’s Lane, Creggan.

The new kits will be worn by the Trojan's U18 team as they compete in local competitions such as the NIBFA National Youth League and the Foyle Cup tournament, as well as many more. Trojans U18 team recently won the Northern Ireland Cup and have many accolades under their belt with their on-the-field successes.

The club has a rich history both on and off the field, with talented stars coming through the ranks, including current international superstar James McClean, as well as local legends Kevin Deery, Gerard Doherty, Cormac Burke and Des Liddy.

Radius Housing is a leading housing developer, constructing hundreds of new social and affordable homes each year, as well as managing more than 13,000 social homes across Northern Ireland. The development of the 119 new homes in the Creggan is a £20m investment, which is being undertaken by Radius in partnership with Sean Dolans GAC, Ulster GAA, Derry City and Strabane District Council, the Northern Ireland Housing Executive and the Department for Communities. Radius is committed to providing a wide ranging economic and social benefits for the local community as part of this development, and the new sponsorship of Tojans’ U18 team is part of that work.

Trojans Operations Officer Diolain Ward welcomed the contribution from Radius Housing: “Sponsorship from businesses across the region is vital to our success and development. Without fundraising support, we could not be the successful club that we are.

"Thanks to Radius Housing, our most senior youth team will be able to field in a new O’Neills playing kit for the forthcoming season.

Diolain continued “This is yet again another positive impact on the Creggan community in which Radius Housing have invested. Their proposed project aims to deliver over 100 new social and affordable homes, alongside an extension and refurbishment of the existing club house facilities and provision of a new multi-use community centre for our sporting partners Sean Dolans GAC. This is a significant investment in our community, and it is welcomed with open arms.”

Karen Scott, Community Empowerment Co-ordinator at Radius Housing said “Community organisations like Trojans play a really important role in improving the lives of local people and their community. Trojans have a strong record and reputation locally, not only producing great footballers, but also community leaders. We are delighted to be supporting the Trojans’ U18, and we will be cheering them on throughout this season.”

Ciara McNally, Senior Housing Officer, added “This is just one of the local projects Radius is supporting in the wider Creggan area as we build new homes at Bligh’s Lane. We are about more than simply building houses, we want to play a role in building strong local communities, and partnerships like this which are central to achieving that goal.”