Two wins in succession for Ruaidhri Higgins and his team 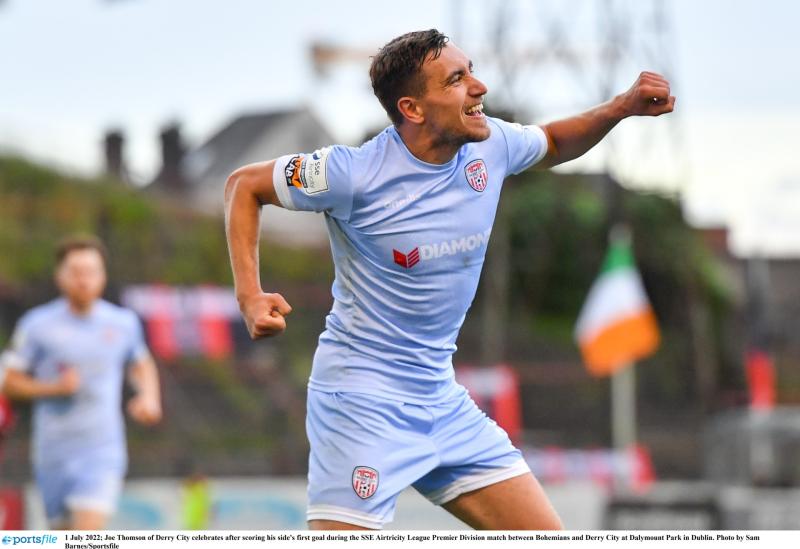 Derry City held off a Bohemians fightback to claim a fantastic victory in torrential conditions at Dalymount Park.

Ruaidhri Higgins’ men had to dig deep to claim the three points, as the home side threatened to wipe out a two-goal deficit in the closing stages of another dramatic game between these teams.

The visitors should have had the lead on 35 minutes but were denied by a brilliant double save from Ryan. Caoimhin Porter’s early cross from the right set up the incoming Danny Lafferty, who first time volley was stopped by the Bihs’ goalkeeper who also reacted brilliantly to deny Joe Thomson from scoring the rebound from close range, directing the midfielder’s shot over the bar for a Derry corner.

That sparked Bohs into action and they came close themselves when Devoy found Junior Ogedi-Uzokwe in the Derry area, and his flick set up Promise Omochere, whose low shot was saved by the feet of Maher.

The breakthrough came just three minutes before half time and it was a brilliant finish from Joe Thomson which gave Derry City the lead.

Caoimhin Porter picked out the run of his team mate down the right wing, and Thomson took advantage of Tadhg Ryan’s poor decision to race out of his goal, lifting the ball over the Bohemians goalkeeper and into the net for his third goal of the season.

Bohs drew level on 58 minutes when Twardek’s cross was headed away by Porter, but only to the edge of the area where Ali Coote arrived to volley the ball spectacularly beyond Maher and into the net to make it 1-1.

The home fans were still celebrating the equaliser however when Derry City struck again. Caoimhin Porter made up for his error immediately as he crossed deep to the back post where Matty Smith arrived to volley the ball left-footed into the roof of the net to restore his team’s lead less than 60 seconds after Coote’s goal.

It just got worse for Bohs from there as they then shot themselves in the foot spectacularly to hand Derry City a 3-1 lead. Substitute Jamie McGonigle tricked Jordan Doherty into giving away a free kick on the left wing and when Patching delivered into the area, Dawson Devoy headed the ball past Ryan into his own net to give the visitors a two-goal advantage with 15 minutes remaining.

Devoy went some way to making up for that own goal by reducing the deficit back to one goal with five minutes remaining. The Bohs man picked the ball up unchallenged 25 yards from goal and sent an unstoppable effort past Maher into the corner of the net to set up a frantic finale at Dalymount.

Bohs almost pulled it back level when Omochere’s header from a corner was stopped on the line before Derry somehow survived a goalmouth scramble as they desperately held on to win the game.