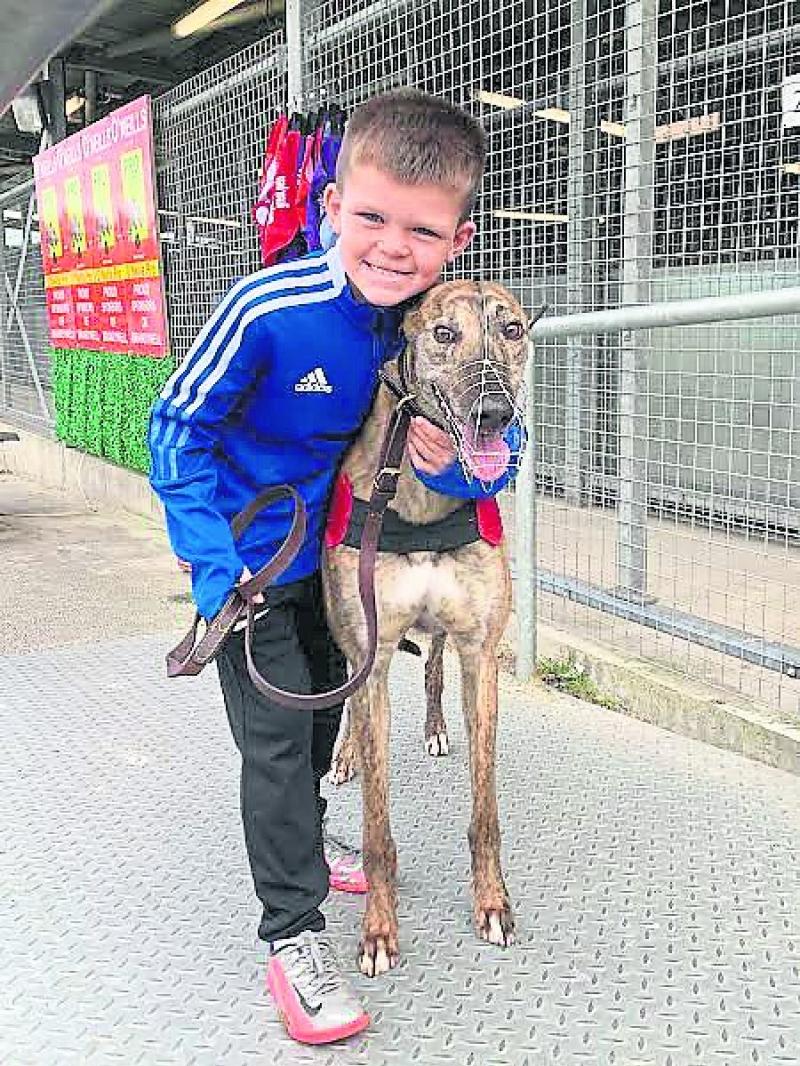 Robbie Lad a semi-finalist in the Benny Barrett Memorial Sprint with his namesake Robbie Campbell.

The Track Lotto Memorial Gala Night will be held at Brandywell greyhound track on Monday next, June 27, after the finalists for three of the competitions taking place on the night were decided this week.

The semi-finals of the Billy and Sheila Quigley Memorial 525, the Benny Barrett Memorial Sprint and the Managers Select 500 competitions were the feature events on the competitive eight-race programme on Monday night.

Racing got underway in the first race with sprint action and four of the six runners were making their racing debut.

It was the Noel and Anthony Gallagher owned Raffgall Kate (Droopys Nidge x Coolatee Molly, Oct ’20) who was having her second career start that emerged an impressive 7.5 length winner in 16.90.

Kate is the first winner from this litter and she follows in the footsteps of her classy dam who has won previously over course and distance in 16.66. 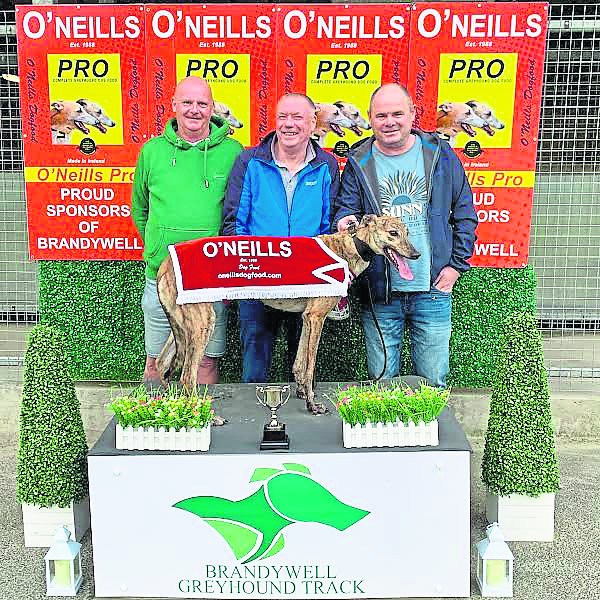 In the second race over 500 yards, Very Ordinary (Jaytee Jet x Funny Pippa, Nov ’20) for Michael McLaughlin was another runaway winner by 7.75 lengths in 28.14.

He is the first four bend winner from a promising litter that are just starting their careers. His littermates Cillians Jet and Barberjet Spike have both won over the 300 yards at Brandywell in 16.64 and 16.74 respectively.

The first semi-final of the Billy and Sheila Quigley Memorial 525 was a thrilling race.

With only four runners, it was repeat contest of those dogs filling the first four places in the first round.

Brakes Are Off (Droopys Sydney x Lady Midnight, Aug ’20) emerged the victor again for Brendan Duffy but with his competitors getting clearer runs this week, his 3.5 length first round win was diminished to a neck from the fast finishing Dance Jaco in 29.11.

Footfield George was a further 1.5 lengths behind in third.

Brakes Are Off shows great pace on the long run to the first bend and down the back straight and will be a leading fancy for the final. This pup has only had six career starts and is likely to continue to improve with age and race experience. 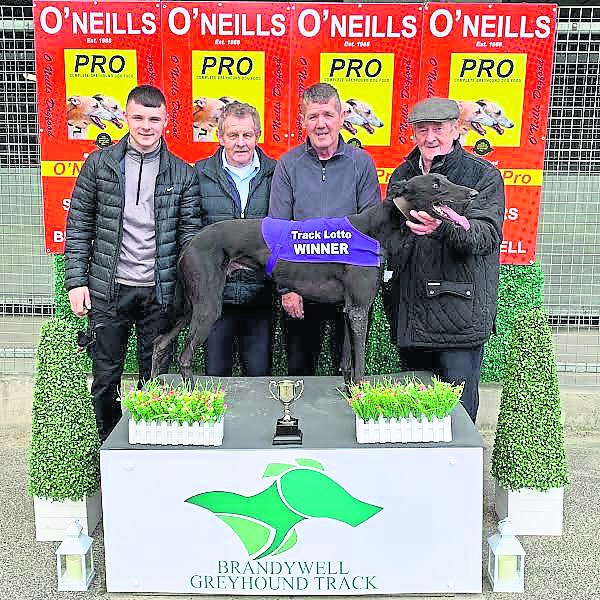 Brakes Are Off who won the first semi-final of the Billy and Sheila Quigley 525. Owner Brendan Duffy with (right to left), Michael Loughrey, Danny Melly and Tom Mullan.

Lakeside Model (Tyrur Big Mike x Newquay Delight, Feb ’19), for Dominic McGarrigle, took advantage of some fourth bend crowding and stormed up the home straight to win in 29.82 by 2.75 lengths from Do It Stevie in the second semi-final of the Billy and Sheila Quigley Memorial 525.

Gotheratlast was a further 0.5 lengths back in third but got tripped from behind when leading at the fourth bend.

Lakeside Model has now won two of his three races since he arrived at Brandywell following a successful start to his career in Galway.

The semi-finals of the Benny Barrett Memorial Sprint were the fifth and sixth races on the programme and we were treated to a magnificent performance from the veteran Generous Daisy (Droopys Roddick x Sizzling Daisy, Mar ’18), owned by Charlie Baxter. 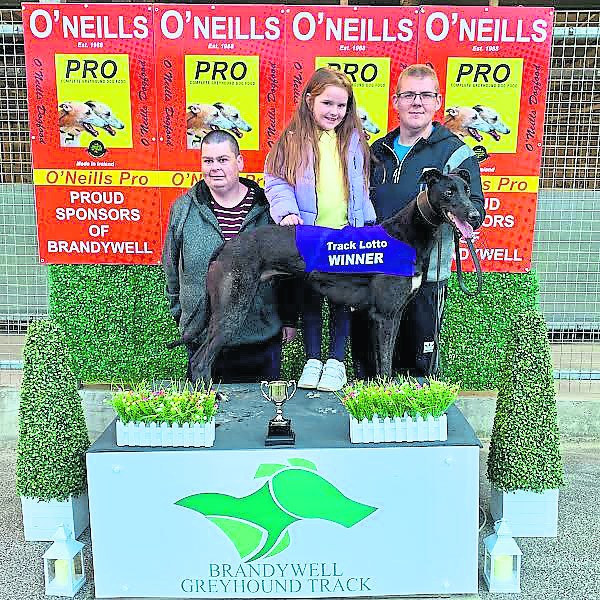 Galsgone who won the second semi-final of the Managers Select 500 with (left to right) Declan O’Kane, Orla Wray and Kealan O’Kane.

She was fast away from trap 6, ran a terrific bend and pulled away from the field up the home straight when winning by 5.25 lengths in a sizzling 16.50.

This was the fastest run of her career which was even more impressive considering Daisy has had two litters of pups.

She certainly has a zest for the thrill of the chase and is obviously at the peak of her fitness.

Baystreet Covid ran on for second place with Cagey Maggie, taking the last qualifying place for the final, a further neck away in third.

Flyer has great early pace which will be an advantage in the final.

The fast finishing Summer Swirl was closing the gap quickly on Flyer up the home straight but the later held off her challenge by a neck. Twentyoneten was a further 3.25 lengths back in third place.

The trap draw for the final could be influential in the outcome of this competition but with a trouble free run Generous Daisy looks the one to beat.

The places in the final of the Managers Select 500 were decided in the last two races on the programme.

Charles Coyle and Norman Lecky’s litter brothers, Brother Len (Droopys Nidge x Roxy Music, Sep ’20) and Catchtheswallows both made it through to the final, with Brother Len getting his first career win a fast 27.90.

Len was evenly away from trap two but showed good pace to lead at the first bend and ran on for a comfortable 4.5 length victory from Cornamaddy Genie.

Genie was racing from trap three but a wider draw may suit her better.

Catchtheswallows was 10.5 lengths back in third after encountering crowding early in the race.

Brother Len will be a leading fancy for the final but much will depend on the trap draw.

Kevin O’Kane’s Galsgone (Ballymac Eske x Fine Jewel, Mar ’20) was a determined winner of the second semi-final of the Managers Select 500 in 28.28.

She trapped well but took an early bump and lost her advantage. 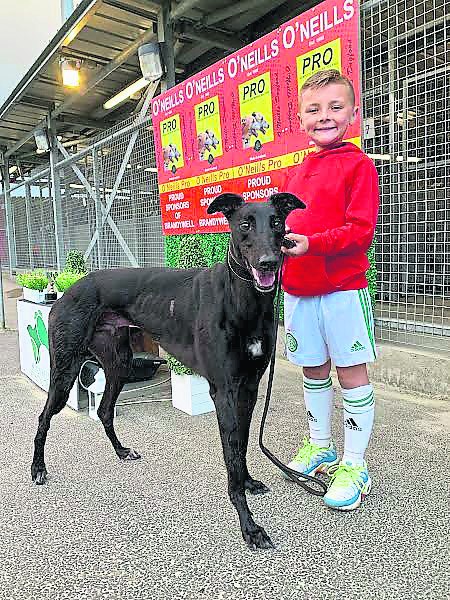 Palmgrove Flyer who won the second semi-final of the Benny Barrett Sprint with Shane McColgan who helps his Uncle Stephen Radcliffe care for his dogs.

However, she kept focused and regained the lead coming up the home straight, finishing two lengths in front of the early leader Snipe Drum.

Generous Rascal finished 1.25 lengths back in third place and took the coveted, last qualifying place, for the finals next week.
Congratulations to all the dogs that have earned their places in the finals and thank you to everyone who took part in these competitions.

Thanks also to the Track Lotto Team who have arranged this Memorial Gala Night and special thanks to all the sponsors who have been supporting the Brandywell over the years and who have chosen to remember their loved ones through their sponsorship of these most prestigious of competitions.

ONE TO WATCH - ROBBIE LAD

Six year old veteran Robbie Lad (Belles Direction x Westmead Sophie, May ’16) has been travelling to Brandywell from Armagh with his family to contest the Benny Barrett Memorial Sprint.

He ran very well in the first round and thoroughly enjoyed his experiences qualifying as far as the semi-final stage.

He is named after Shea Campbell’s youngest son Robbie who has helped his dad and older brother Stephan look after the dog since he started his racing career.

It has been an illustrious career with some flashy runs around Dundalk including a sizzling 21.20 victory and he boasts a famed pedigree being a great grandson of Mega Delight.

She is the dam of world famous double English Derby winner, Westmead Hawk who is immortalised in Madam Tussauds with his own wax work.

The Campbells will continue to enjoy their family trips out to the track to facilitate Robbie Lad’s desire for the thrill of competitive chase as long as he is fit and well to do so.

Thereafter, this canine star will retire with the young lad and his family who has loved and cared for him throughout his career.