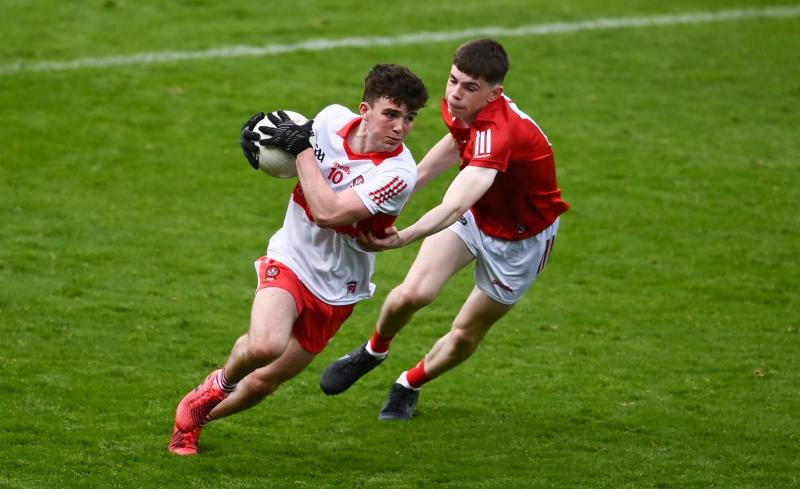 Galway stand between Derry and a third All-Ireland minor final appearance in six seasons on a busy day for Oakleaf fans in Dublin.

Odhran Lynch, Conor McCluskey, Paudi McGrogan, Declan Cassidy, Oisin McWilliams and Ben McCarron were on the squad that faced the David Clifford express in the 2017 decider.

They’ve a different mission on Saturday, as Rory Gallagher’s senior side roll into Croke Park for their clash with Clare.

Derry’s current minor crop bounced back with aplomb in their quarter-final win over Cork, putting their Ulster final defeat – and the concession of four goals – firmly behind them.

They face a Galway side who were beaten by Mayo (for the second time in the campaign) in the Connacht final before overcoming Leinster champions Dublin.

Marty Boyle and his management team were in Tullamore to run their eye over the Tribesmen.

It’s a team backboned by the Claregalway club, who won the Galway A and B minor titles last season.

Two goals from Éanna O’Connor overcame Corofin to win the A title and he has amassed 3-23 as the fulcrum of an attack that includes team mate Owen Morgan, while Jack Lonergan, Ryan Flaherty and Cillian Trayers form the spine.

Another key player is towering midfielder Shay McGlinchey, a native of Bellaghy, who has played with Tuam Stars after the family moved to the west.

Just six days after losing their Connacht final, Galway found themselves 0-4 to 0-0 in arrears after 13 minutes against a Dublin side with the wind at their backs.

Galway passed up two goal chances, including a missed penalty from Stephen Curley. When the Dubs – trailing by two - had midfielder Nathan Fitzgerald sent off on a black card, Galway made hay with their extra man.

By the interval they were 0-5 to 0-4 ahead and when the sides were level early in the second half Dublin had Luke O’Brien dismissed on a second yellow card and Galway grabbed a hold of the game.

Looking across the stats both teams have averaged 1-13 per game this season, with Derry a five-point advantage on scored conceded.

Of Galway’s ten goals, seven came in two games against a Sligo team Derry also accounted for easily in the Ulster league.
Derry’s side have reached the last four despite the considerable absence of captain Ryan McNicholl.

The Glenullin man was the pivotal point of their attacking unit, but Derry have dusted themselves down and deserve a lot of credit putting their head down without their talisman.

The squad were disgusted with how poor they defending, collectively, against Tyrone. Once they found their feet in the Cork game, it never looked like anything other than an Oakleaf victory.

By half time, they were 0-5 to 0-2 ahead and the lesson they’ll learn from Galway’s win over Dublin is the need to put Galway away if there is a spell of control.

It’s a small source of comparison, but Dublin were six-point winners in a challenge game, Derry’s first outing of the year with both teams very close to their Championship hands.

There was word in the minor management circles across Ireland that Galway were one of the fancied horses coming into the 2022 season.

It was their midfield diamond that turned the game against Dublin and Ben O’Connor’s varied kick-outs will again come into play.

The main Derry decision this week comes down to who is handed the job of picking up Éanna O’Connor. He wears number 13, but plays at centre forward.

James Murray did a great job on Ed Myers, Cork’s playmaker, but O’Connor’s scoring rate could see Danny McDermott move to centre back like he did against Armagh, with Murray going in to pick up Stephen Curley.

Fionn McEldowney could be handed the job of marking Colm Costello, with Shea Birt – a very consistent player all season – and Odhrán Crozier on the wings.

For all Galway’s chopping and changing during the group stages, their half back trio of Mark Mannion, Cillian Trayers and Ross Coen has been a consistent line.

When the Galway management mixed up their defence in their 3-8 to 0-12 defeat Leitrim - the only game Éanna O’Connor didn’t feature in - regular corner back Vinny Gill was on after 24 minutes, with Coen and Tomás Farthing drafted in during the second half.

The Derry story is one of being greater than the sum of their parts. It’s about maximising Ciaran Chambers, Eoin Higgins and Odhran Murphy’s scoring input, with Cahir Spier using his trickery just ahead of midfield to open gaps for Johnny McGuckian to cut through.

That’s the other side of what Derry need to bring.

It’s a first meeting of the counties at minor level since Damien Reddington’s late goal sunk Derry in the dying member of the 2007 All-Ireland final.

Minor football is often the most unpredictable of beasts, but if Derry can replicate the hunger in middle third from their Cork performance, it’ll put one foot in the decider.