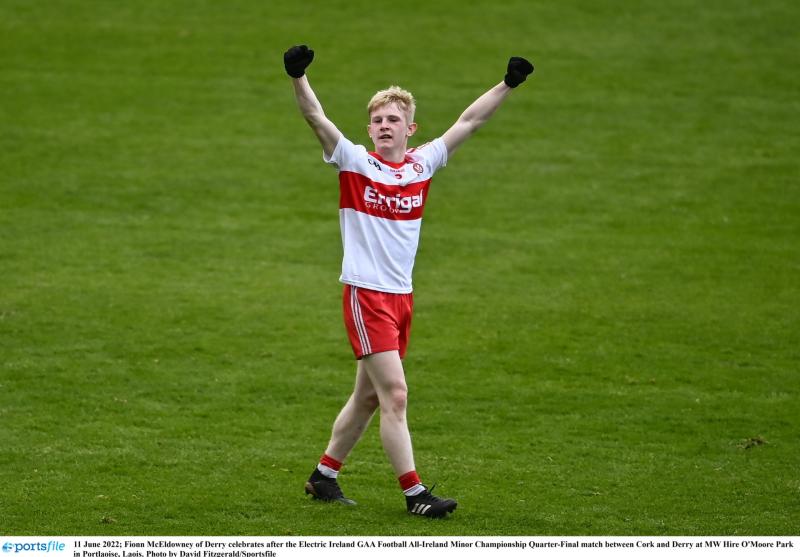 Derry eased their way to the All-Ireland semi-finals with victory over Munster champions Cork on Saturday evening.

The result was more convincing than the margin suggests, with Martin Boyle’s side turning their Ulster final hurt into a hunger Cork couldn’t match.

Derry gave Cork no room to breathe on their kick-outs and while Josh Woods was accurate with his kicks to the wings, the Rebels found it hard to make any headway through the middle third.

Aside from their obvious desire, Derry had key men in all the right places. Fionn McEldowney did an exceptional job on dangerman Bryan Hayes, with Eoin Scullion also excellent in a brilliant defensive unit.

Despite shipping four goals in the Ulster final, the Oakleafers were brave and didn’t play with a dedicated sweeper. Selector Darren McShane made the trip to Páirc Uí Rinn to see Cork waltzing past Kerry and his findings were important.

James Murray went to centre back to blot out playmaker Ed Myers. Odhran Crozier had the concentration and discipline to drop off to be the sweeper when he could, but still kept an eye on Munster final Man of the Match Alan O’Connell.

At centre of everything, Danny McDermott played at full back on Gearoid Kearney, but it was his forays upfield that energised Derry to another level completely.

Ruairi Forbes and Dara McPeake, who rotated with Crozier at times, also helped to give Derry the stability to go on and win the game.

Derry were out of the blocks early and when the dynamic Johnny McGuckian was fouled by Darragh O’Donovan Ciaran Chambers effortlessly slotted between the posts.

When the Oaks notched their first score from play, Fionn McEldowney and Odhran Crozier defended excellently, with Danny McDermott’s run leading to Spiers playing a pass and Chambers doubled the Derry lead.

Cork did have their spells on the ball, but any runs or kicks upfield were repelled by a Derry team who had everything right and had enough attacking threat to swing the game in their favour. They nearly had a goal at the end of a well-crafted move, but Johnny McGuckian’s flicked was diverted wide and Odhran Crozier thumped his ‘45’ between the posts for another statement of intent.

From the kick-out, it was one of the rare occasions Woods went long where Hayes fed Olan O’Donovan, but when he was closed down he passed to Colm Gillespie before taking the return to open the Rebels’ account after 13 minutes.

O’Donovan missed a simple free and soon it was Derry who were on the scoreboard again. Shea Birt hovered up a punt forward where Johnny McGuckian and Eoin Higgins combined and Odhran Murphy popped over a sweet score for a 0-4 to 0-1 lead after 18 minutes.

Derry were in total control at this point and should’ve been further ahead. Eoin Higgins pulled a free wide and was twice blocked in a later move as he cut though the Cork defence. What summed Derry up was the 60-40 ball Johnny McGuckian won in the next play, with the Glen man second favourite to get his hands on the leather. It was that sort of day.

With five minutes to the break Colm Gillespie burled a sweet score and Cork were just 0-4 to 0-2 in arrears despite being outplayed for much of the half.

Derry did hit back with the score of the game, a move that saw Chambers kick over with his left foot. The rest of the half was left to the Derry defence to earn their corn and ensure a 0-5 to 0-2 margin. The Cork team emerged first after the half-time break. Derry’s extra few minutes in the dressing rooms paid off. After winning the throw-in, Ruairi Forbes galloped forward with a style only matched by his deft shot between the posts after a mere 11 seconds.

It was a statement of intent and a signal for the Oakleafers to up the ante once again. When Birt picked up a loose ball from a turnover – one of his many possessions – Johnny McGuckian sped forward where he was fouled and Chambers kicked Derry into a 0-7 to 0-2 lead after 32 minutes.

In the next attack a gem of a pass from McGuckian opened the door for Derry, but when the ball was played to Birt Cork regrouped enough to force him into a hurried shot wide.

A free from Crozier, sweetly struck off the ground, from all of 45 metres extended Derry’s lead to 0-8 to 0-2 before Cork were to get their third score of the game. A short kick-out was worked upfield, with Bryan Hayes forced to kick from close to the 45 metre line, such was Derry’s perfect setup in defence.

Eoin Higgins and Murphy added to the Derry tally with fine points as the game ran away from Cork.  In defence, Ben O’Connor and his defenders were assured on the ball, radiating a confidence across the team.

Derry players began to suffer from cramp, such was their exploits. Hayes popped over two frees to narrow the gap before Gillespie, now at full forward, made it 0-11 to 0-6 with normal time up.

The final act was left to Shea Birt; involved in many of the turnovers, to notch the final point and Derry were safely in the semi-finals.