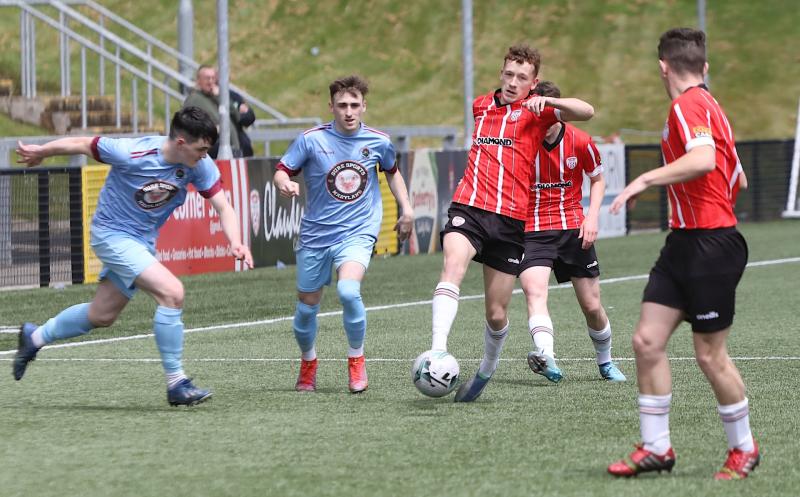 Action from the game between Institute and Derry City at the Brandywell. Pic by Tom Heaney, nwpresspics

Institute are into the final of the Palmer/McDaid Cup after defeating Derry City on penalties at the Brandywell.

Brian Donaghey’s team were on the verge of exiting the competition until defender Rhys McDermott powered home a header right on 90 minutes to send the game to penalties. From there they went on to win their second successive penalty shoot-out to seal their place in next week's final.

In an entertaining game, it was Institute who broke the deadlock in 26 and it was a memorable strike which did it. Shaun Leppard produced a good tackle to dispossess McFeeley in midfield and Cormac Burke gathered the loose ball before firing a brilliant left-footed effort from 30 yards directly into the top corner to make it 1-0.

Derry were building momentum however and they deservedly equalised on 34 minutes when Tiarnan McKineny’s pass from the right put Jack McFeleey in and he made no mistake, lobbing the ball over McCrory and into the net to make it 1-1.

The Candystripes then went ahead right on the stroke of half time when full back Ronan McAleer drove a left-footed volley into the top corner past McCrory to finish the half on a high for Mark McChrystal’s team.

After a quiet second half, ‘Stute saved themselves in the final few seconds when Cormac Burke’s corner tempted Lemoignan from his line, but he was beaten to the ball by Rhys McDermott who powered a brilliant header into the top corner to make it 2-2.

In the penalty shoot-out which followed, Michael Glynn (Derry City) and Kealan McGill (‘Stute) both missed before ‘Stute goalkeeper Kealan McCrory saved from Corey McLaughlin to win the game for his team.

They now await the winner of tomorrow’s second semi-final between Maiden City and a D&D Select, which kicks off at the Brandywell at 1:30pm.