Young Oaks back on the Championship rollercoaster

Derry hoping to bounce back after Tyrone defeat. 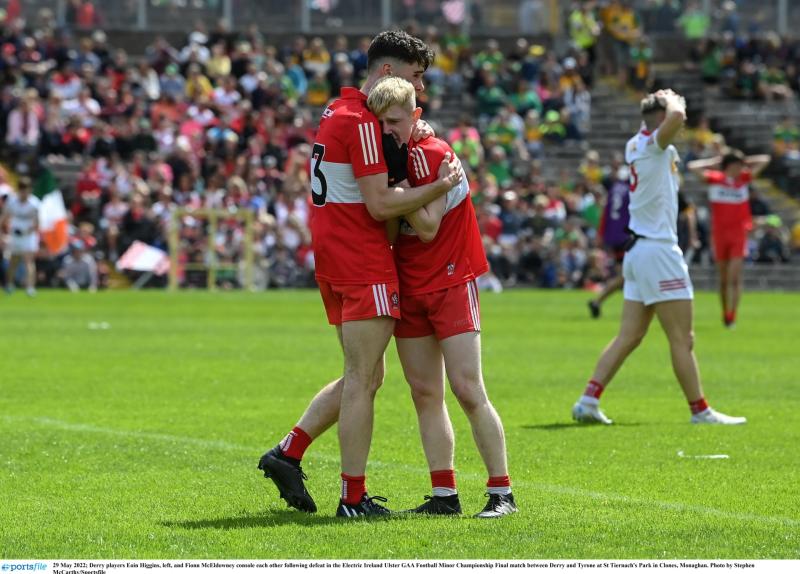 Derry Minors take on Cork today hoping to bounce back after their recent defeat to Tyrone.

The body language told it all. Looking on as Tyrone skipper Eoin McElholm hoisted the Fr Liam Murray Cup aloft, the Derry players were crestfallen.

Their Ulster title hopes lay in ruins, but they found solace in each other and today they are back on the horse again thanks to their ‘back door’ route into the All-Ireland series.

Standing in their way is a Cork team that overcame a 14-point hammering by Kerry to turn the tables on their rivals to earn a 3-11 to 0-9 win in the Munster final last Wednesday night.

As selector Darren McShane travelled south to scout this weekend’s opponents, the rest of the management team picked the Derry players up from their slump.

It was their second meeting with Tyrone of the season and defeat was again the unwanted taste.

The defeat will have been tinged with regret. While they struggled to breakdown a resolute Tyrone defence, Derry had their moments around the edges and on another day may have found a way to win.

Conceding two first-half goals always left them chasing and with Cahir Spiers lively in the midfield sector, they put in a second half performance that would’ve won many a game.

After conceding a third goal, Marty Boyle’s side again hung in and with minutes to go were back to within a point before Tyrone dealt the hammer blow with McElholm’s second goal on the cusp of full time.

It was a day when Conall Higgins had a shot clawed off the line and Shea Birt’s low shot to the bottom corner hit the outside of the post rather than the inside.

The calling card of the Derry team all season was their composure beyond their years with a strong defensive unit.

Losing captain Ryan McNicholl was a huge blow, but they’ve regrouped and kicking sixteen points on Ulster final day is no mean feat.

Cork were All-Ireland champions for an 11th time in 2019 and have won back-to-back Munster titles.

Manager Michael O’Brien had to perform surgery on his team with five chances after Kerry hammered the Rebels in the semi-final (1-16 to 0-5) before bizarrely meeting them in the final in a strange championship format.

Brian Hayes will be one of the names jumping out from the analysis of Cork’s win for this 2-3 tally, with Ed Myers at centre forward involved in much of their play.

Fionn McEldowney could be handed the tasked of curbing Hayes, with Danny McDermott moving to centre back despite the number four jersey he has worn through the campaign,

Another central figure in Cork toppling the Kingdom is Alan O’Connor and Marty Boyle will almost certainly hand Johnny McGuckian the task to putting him on the back foot, a role he has done all season.

The Oakleafers will be hoping the two weeks will have given defender Eoin Scullion time to fully recover from a quad injury. Despite being heavily strapped he made some fine interceptions in their defeat to Tyrone.

Another plus point of Derry’s run has been the varied kicking of Ben O’Connor into the pockets beyond midfield. With Ruairi Forbes and Dara McPeake at midfield, this will be an area that will have a big bearing on the game.

There will be a Ulster interest in the curtain-raiser (4pm) as Kerry take on Tyrone, with both Ulster teams well-placed to book their spot in the last four.