Former Derry City midfielder back at the Brandywell last weekend 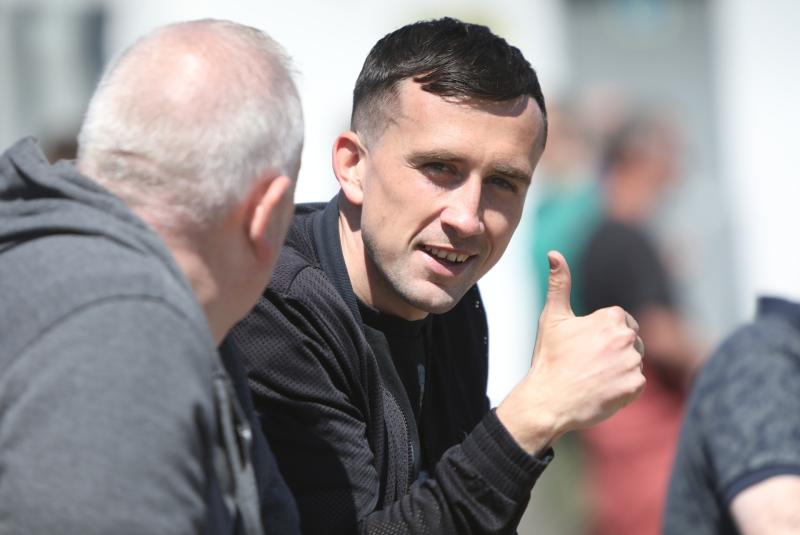 Hearts midfielder Aaron McEneff was at the Brandywell on Saturday to watch two of his old teams, Don Boscos and Derry City, in action. Pic by Tom Heaney, nwpresspics.

Aaron McEneff is determined to force his way back into the Republic of Ireland picture by building on a steady first full season at Hearts.

The former Derry City and Shamrock Rovers midfielder was back at the Brandywell at the weekend, as special guest for the Palmer McDaid Cup as part of the 50th anniversary celebrations of local team Don Boscos. McEneff took in the game between Boscos and Derry City, clubs he has both represented in a colourful career that has now taken him to Scotland.

After helping Hearts to promotion in his first few months at the club, McEneff then played his part as the Edinburgh club finished in the top three of the Scottish Premier Division, and reached the Scottish Cup final where they lost to Rangers.

Despite that disappointment, McEneff looks back on the season as a success collectively, and one he can learn from individually.

“Collectively as a team we had a really good season,” he agreed. “It didn’t end how we wanted it to end but it’s a good season and something to build on for next year.

“The season for me personally had its ups and downs. I probably didn’t play as much as I would have liked at times, but I kept myself ready and when I did get my chances to play, I think I did relatively well, and managed to chip in with a few goals.

“Every footballer wants to be playing every week; we have a good squad at Hearts and the boys were doing really well so sometimes I just had to bide my time. I’ve enjoyed the season, so I’m putting the feet up and recharging for next year now.”

McEneff, who was released by Tottenham back in 2015, never made a secret of his desire to go back across the water, with successful spells at the Brandywell and Tallaght paving the way to a move to Scotland, where he is now hoping to become a regular with Hearts as they aim to build on that first season back in the top flight. McEneff admits he has had to be patient.

“Sometimes you have to understand why you’re not playing,” he acknowledged. “I had loads of chats with the manger. We were winning games and getting good results and the boys were doing well so at times you have to bide your time and then take your chance when you do play. You could ask any footballer, you want to play every week and nobody likes sitting on the bench, but I keep my head down and I’ll work hard in pre-season and take it from there and hit the ground running for next year.”

While he has had some memorable moments on the pitch this past year, McEneff has had massive change off it as he became a father for the first time. He admits that being a dad to a little girl has changed his life.

“It’s been a massive change,” he agreed. “I went there and there was covid and everything was still locked up. My missus Ellen was pregnant at the time and we had the wee one and she’s one now, so it’s been a whirlwind of a year really. A lot has changed, but a lot has changed for the better; it’s been amazing. Becoming a father has been class even though I don’t get much sleep, but I wouldn’t change it. Just having the family life now outside football takes your mind away from football at times and helps you relax, but it’s all good and things are all positive.”

One dream that McEneff still holds is to get another call up to the international stage. He was first called up for the Nations League back in November 2020, but didn’t play, and pulling on that green Republic jersey is still very much an ambition of his.

“It's been my dream, and it’s every boy’s dream that plays football to play for their country and it’s something I want to do some day,” he said. “I know that to do that you need to be playing every week and playing well for your club, so it’s up to me to get onto the team and be a regular and that’s where your focus has to be before international football. It would be a dream come true for me to play for Ireland.”