Trophy slips through the net for Derry Minors

Tyrone clinical in front of goal to lift trophy 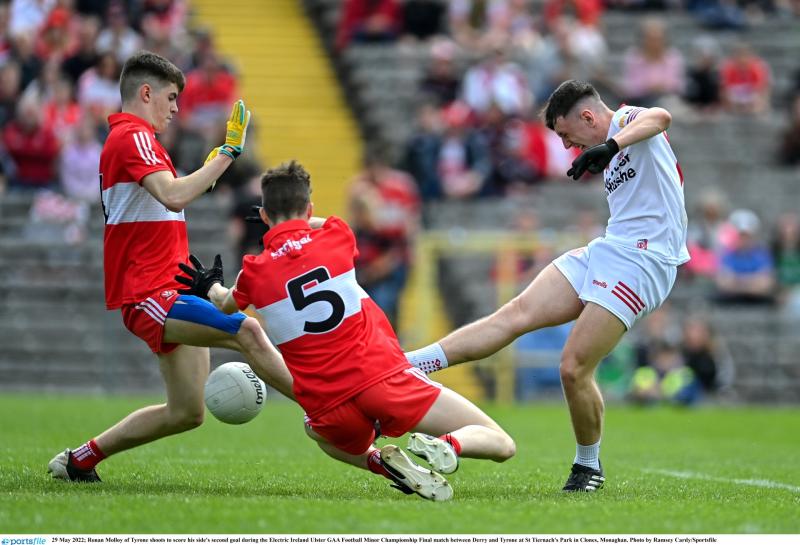 There was disappointment for Derry Minors earlier today as Tyrone minors hit four majors to take the Ulster MFC title.

Two from captain Eoin McElholm and one from Caolan Donnelly and Ronan Molloy were enough from the Red Hands to see off their near rivals, but it wasn’t without a spirited and determined Derry performance.

Indeed, the game went right down to the wire despite those goals, with McElholm netting late in added time to secure the result.

The Oakleaf will go again in the All-Ireland series, and Marty Boyle will have no problems picking up his charges after this tough defeat. They have plenty more in them.

Derry took just 30 seconds to open the scoring when Johnny McGuckian set up Odhran Murphy in space 25 metres out and he cushioned it between the posts.

The Red Hands were level on five minutes, however, when a fine passing move ended with skipper Eoin McElhom popping it over.

The Oakleaf retook the lead on 11 minutes when a lengthy move, started by Fionn McEldowney, ended with Dara McPeake passing for Ciaran Chambers to convert, but Tyrone responded immediately when Ronan Molloy fisted over from close range.

The Red Hands took the lead for the first time on 14 minutes when McElholm showed a great turn of pace to receive the ball and send an arrowed shot to the bottom right corner of the net, with Ben O’Connor helpless to stop it – 1-2 to 0-2.

Chambers steadied the ship with an 18th minute free after McGuckian was fouled 35 metres out, but the job got bigger for Marty Boyle’s men soon after when Conan Devlin got the beating of James Murray down the left side, and after his effort from a tight angle rattled off the crossbar, Molloy was waiting to fire home from a few yards out on the rebound to put five between them.

Derry were struggling to get any real momentum, but they did reduce the gap on 27 minutes when Chambers was taken down by Conor Devlin, and Eoin Higgins took the dead ball to curl it over off the left – 2-2 to 0-4.

Johnny McGuckian tried to give Derry a spark when he burst down the right and was taken down from behind by McElhatton, with Higgins curling the free just inside the upright.

Noah Grimes answered back with a free of his own as the half entered two minutes of added time, and that proved the final score as Tyrone went in with a four-point advantage at the short whistle.

Derry made a good start to the second period, when a Chambers shot was blocked down for a ’45 that Crozier confidently struck between the posts.

A Sean Hughes free off the floor was followed by a great strip tackle from James Murray to deny another quick Tyrone break before a moment of individual brilliance from Cahair Spiers – curling it between the sticks from distance.

A third Eoin Higgins free, after McGuckian was fouled, was swiftly followed by a lovely Murphy point after a McPeake pass.

One of the scores of the game then came on 37 minutes off the boot of Greenlough’s Shea Birt who hit it sweet and true from 40 metres out to a big roar from the crowd as the scoreboard read level.

It didn’t take long for Tyrone to regain the lead though when McElhatton was left in space to pop it over from the right and the Red Hand man followed it up with a beautifully sliced point on 41 minutes – 2-6 to 0-10.

Yet another foul on Johnny McGuckian resulted in another handy free for Eoin Higgins to put one in it again, but Tyrone found the net for a third time on 43 minutes when Grimes played a sensational low ball into the path of McElhatton who laid it off for Caolan Donnelly to smash home.

Derry nearly had the perfect response when Birt went on a mazy run down the left, but his shot struck the base of the post and came back for McGuckian to curl over an impressive point.

Two Higgins frees, one after Forbes was fouled on a goal chance, put the bare minimum between them at 3-6 to 0-14, but just as they had been doing all game Tyrone found a way to answer back through a Grimes point.

Red Hand substitute Ruairi McCullagh got in on the scoring action on 52 minutes but another Higgins free kept Derry in close contention, with two the gap.

An exceptional individual score from Spiers came before Conall Higgins had a massive goal chance for Derry, but the palmed attempt was smothered in the air by Conan Devlin.

The game was won in the second minute of added time though when, after turnovers on both sides, Tyrone captain McElholm netted his second goal of the day, and Tyrone’s fourth, to take the trophy.