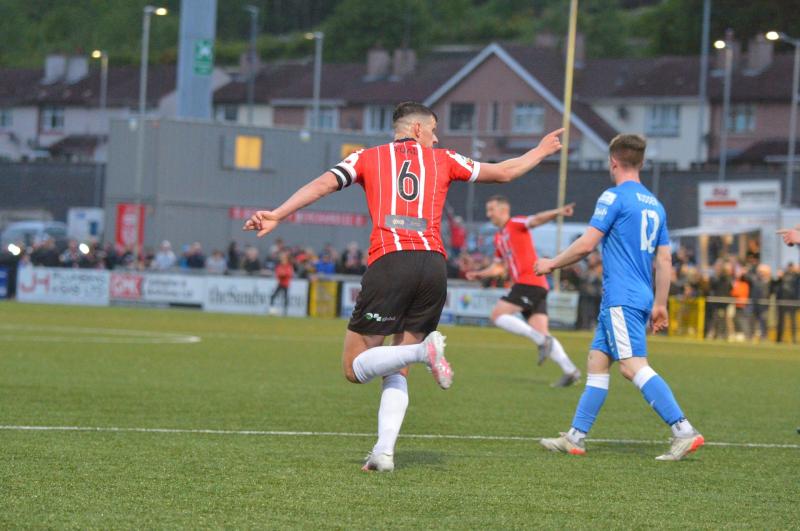 Derry City captain Eoin Toal rescued his team with a brilliant header deep into added time to save a point against Finn Harps.

The defender rose high to meet a Will Patching cross to direct a header past Mark McGinley just when it seemed that the Candystripes were going to fall to their fourth successive defeat.

The last thing that a fragile Derry needed was to concede an early goal but that’s exactly what happened as Finn Harps took the lead after just eight minutes. A ball into the area was flicked on by Ryan Rainey right into the path of Filip Mihaljevic, who drilled the ball low past Brian Maher to make it 1-0.

It wasn’t a case of shutting up shop at all for Harps who came so close to doubling that lead on 14 minutes. Mihaljevic won a free kick from Will Patching 20 yards from the Derry goal and Regan Donelon went straight for goal, with his effort beating Maher but striking the top of the crossbar.

Derry City needed something to go their way, and it did on 21 minutes when Will Patching conjured an equaliser out of nothing.

Matty Smith won a free kick on the left 35 yards from goal, and players from both teams crowded the penalty area in anticipation of a cross. Harps goalkeeper Mark McGinley also anticipated the cross and edged too far off his line, only to be caught out by Patching who sent a brilliant effort straight over the goalkeeper and into the net.

Harps stunned the Brandywell by taking the lead for a second time on 62 minutes. Bastien Hery easily turned past Patching in midfield and played a ball in behind for Eric McWoods to run onto. The striker bore down on goal before cleverly outwitting Eoin Toal to shoot past Maher at his near post.

It should have been 3-1 within moments as frustration began to get the better of Derry and Conor Tourish was unmarked in the box from a Donelon free kick, but he missed the ball completely with just Maher to beat.

There was an unusual look to the City team as the game entered the last 20 minutes with substitutes Danny Lafferty and James Akintunde taking up the central midfield positions with Matty Smith supporting McGonigle in attack.

On a night of few chances, there was just a glimmer for Derry when James McGonigle got in front of Tourish to meet substitute Evan McLaughlin’s cross, but the league’s top scorer missed it completely, and the chance was gone.

Mark McGinley made up for his first half howler when he denied Ronan Boyce with a brilliant save with just five minutes to go. The defender controlled a cross from Akintunde before turning and volleying, but the goalkeeper pushed the ball away. Moments later Patching sent a dipping volley at goal which just cleared the upright as Derry began to ask all the questions.

Five added minutes gave Derry some hope, and they made the most of it with Toal in the right place at the right time to save his team.