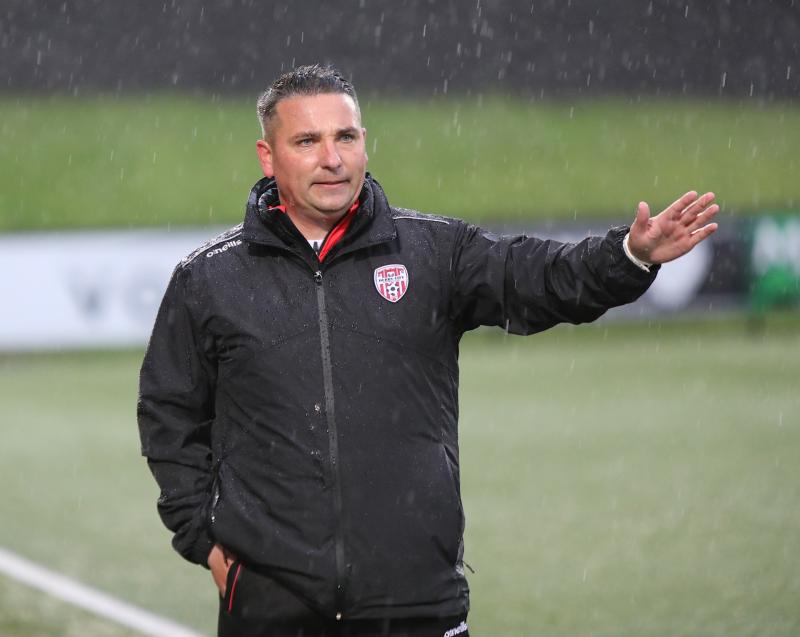 New Derry City Women manager Ryan McConville admits he is excited to be working with such a talented group of players after being named manager for the rest of the season.

McConville was in charge for the first time last Wednesday night as the Candystripes came so close to getting their first Women’s Danske Bank premiership win of the season, giving Linfield a huge scare at the Brandywell before falling to a 3-1 defeat

McConville arrives at the Club with a wealth of experience in the game both internationally in China, America and South Africa and locally having spent time coaching at Linfield, Crusaders and Sion Swifts.

Joining Ryan at City, is Ryan Caddel who will take up the role of First Team Coach. Caddel, boasts a wealth of experience and is a talented up and coming young coach.

“Derry City is a massive club and they have been in the women’s league for quite some time,” he said. “It was quite unexpected and happened quite fast over the weekend, but whenever I spoke with the guys here about what they wanted to try and achieve, it was hard to say no.

“Initially we have agreed until the end of the season, so hopefully we can come in and short-term definitely improve the results and give this team and this club a bit of belief on the women’s side that we can emulate the men’s side. I’m delighted to get the job and delighted to bring my staff in with me. We’ll fight and improve along the way and hopefully pull some results.” 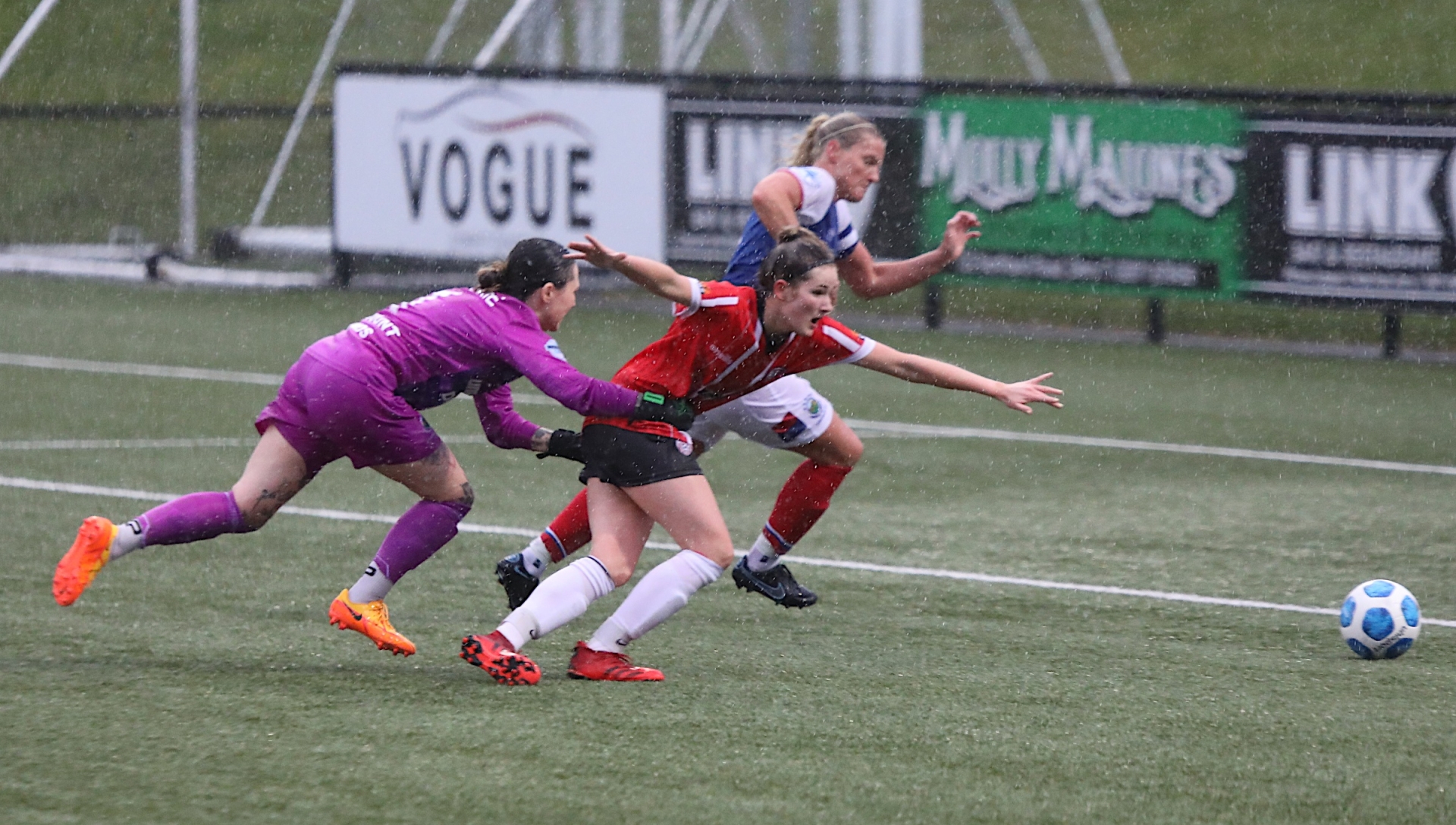 The Blues came to Derry confident of victory but were shocked when Tara O’Connor gave the hosts the lead from the spot 20 minutes into the game. The penalty was awarded when Linfield goalkeeper Lauren Currie blatantly hauled back City striker Donaghey who was about to shoot into an empty goal. Bizarrely, despite awarding the penalty, the match official didn’t even caution the goalkeeper, a call that had consequences on the rest of the game.

Both teams had to deal with an incredible downpour of rain on Wednesday evening, but even in those fierce weather conditions, Derry City held firm in the first half, holding onto their lead thanks to some terrific defensive work and a reliable pair of hands from goalkeeper Claire Friel behind them.

The trend of the game continued into the second half with Linfield applying more and more pressure. But despite creating a host of shooting opportunities, the Blues just could not beat Friel in the Derry goal, who was simply outstanding as she produced spectacular save after spectacular save.

Derry’s resilience was eventually broken 11 minutes from time when Emily Reid scored a brilliant effort from 20 yards, finding the top corner on the turn and finally beating Friel.

That was quickly followed by another when Rhyleigh Marks free kick was adjudged to have crossed the line and in added time Ebony Lecky ensured the Blues secured a hard fought away win.

Despite the disappointment, new boss McConville was very impressed.

From Monday night and again on match night they worked their socks off so there’s no complaints there,” he stated. “They are sitting in there disappointed because for 80 minutes they did well. There was a big referee call in the first half when there could maybe have been a red card; I would have to see it back.

They weathered the storm quite literally and I think deservedly went 1-0 up. Claire Friel was absolutely magnificent and she deserves credit, and our back four were superb. All in all, I would have but your hand off for a point, but unfortunately it didn’t work out that way.

“We spoke about stuff and half time and we knew that Linfield would come out and make changes and come at us. It was just a matter of trying to absorb that pressure which we did for 80 minutes.

It goes to show you – Linfield were winning trophies four or five years ago, but now they are celebrating an 81st minute winner and a 91st minute third goal against Derry City, so it just goes to show you how hard they had to work for that victory.” 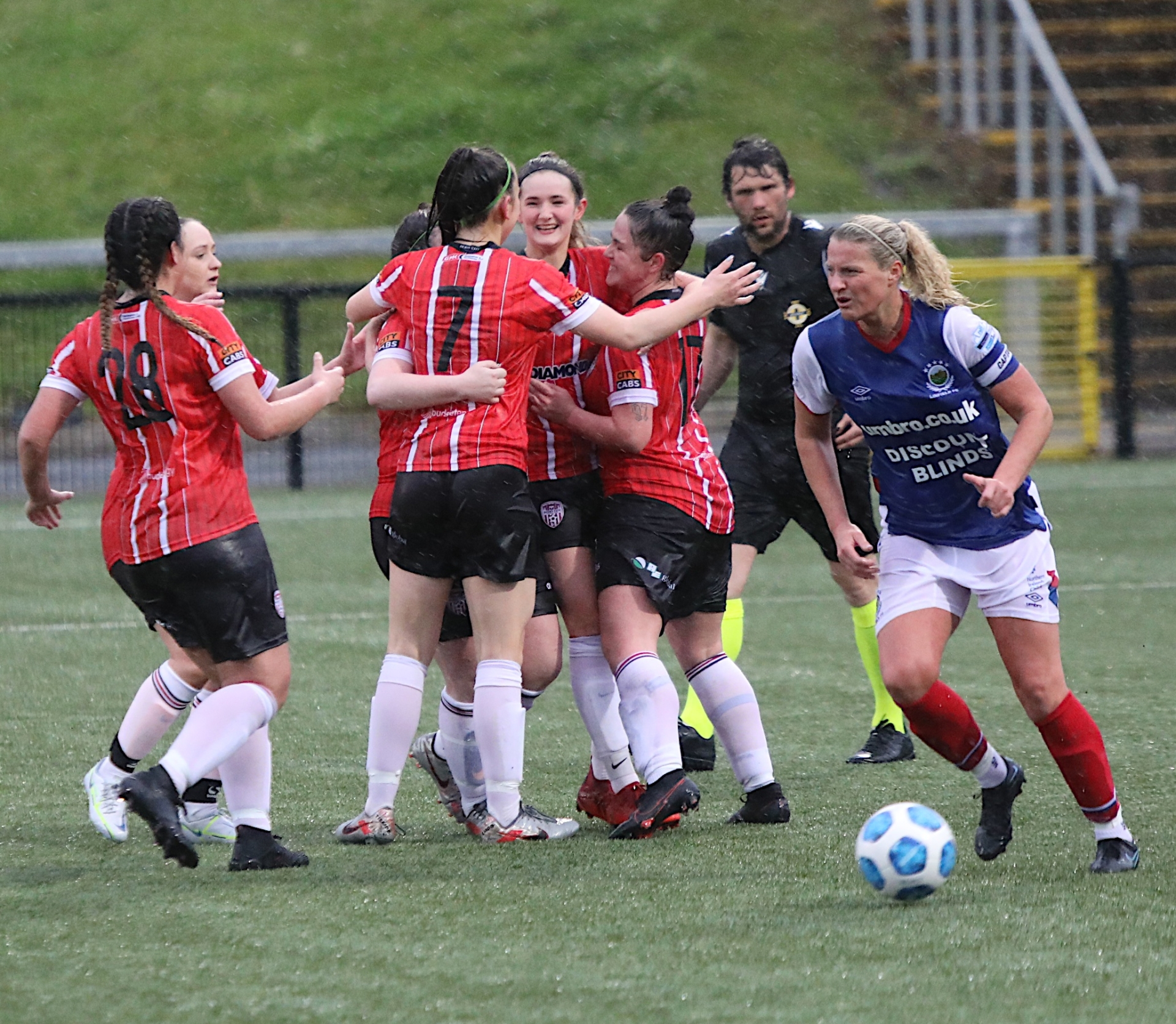 Derry City currently six in sixth place with just two points from five games, but McConville is hopeful that the team can start to climb the table as they become more used to working with each other over the coming months.

“We have to accumulate points first and foremost,” he explained. “I have to come in along with my coaching staff and we have to make the players better. We have to be harder to beat. This league is just going from strength to strength; we have Glentoran and Sion and Cliftonville pushing now and they are probably the three best teams in this division. We have to scrap and scrape for these points coming along.

“They have made progress without doubt, but it’s going to be very, very important that when the split comes, we’re in better shape to approach Mid-Ulster and Lisburn Ladies who have come up. We need to be ready for that.”

Derry City will host Sion Swifts Ladies in their next game at the Brandywell, this Wednesday, May 25, at 7:45pm. Admission is £2.