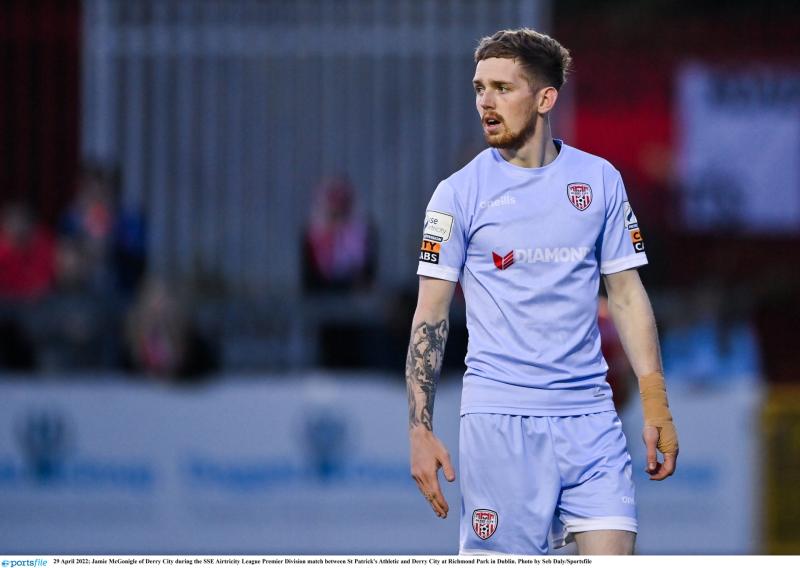 The Sligo sub, having been denied what looked like the winning goal just moments earlier by a brilliant save from Brian Maher, made no mistake as he rifled the ball into the top corner to give the hosts a winner they deserved.

Sligo opened the scoring on 20 minutes. Aidan Keena had the fans on their feet when he skillfully turned away from Cameron Dummigan before driving at goal and seeing his shot deflected wide for a corner. From that corner, Derry were caught cold as McDonnell’s delivery was flicked on and Garry Buckley headed in from close range to make it 1-0.

It should have been 1-1 as Derry counterattacked a Sligo corner brilliantly midway through the half. James Akintunde won the ball ahead of the last Sligo defender and played Joe Thomson through on goal from the halfway line.

Thomson had a long way to go and had Will Fitzgerald breathing down his neck, but he was still favourite and he went all the way into the penalty area, and tried to take the ball around McGinty, only for the goalkeeper read his intentions and stuck out a hand to grab the ball.

There was nothing McGinty could do as Derry City equalised just a minute before the break. It was a bizarre goal as Shane Blaney fell over in his own area, and Buckley’s attempted clearance hit his team mate before spinning back into the area straight into the path of Jamie McGonigle who spun to volley the ball into the net for his tenth goal of the season.

A downpour at half time made the surface even slicker and McDonnell looked to take advantage as he ran at the Derry defence before ending in a shot which Maher had to turn behind for a corner.

Derry were giving as good as they got however and Brandon Kavanagh came so close to scoring his first goal for the club when he turned onto his left foot and his deflected effort had McGinty beaten only for the ball to just go inches wide.

As the second half reached its halfway point, Sligo Rovers were getting well on top and Brian Maher had to parry a shot from the dangerous McDonnell moments before Greg Bolger sent a shot just off target.

Derry recovered and McGonigle really should have scored again on 79 minutes. A pinpoint pass forward from Thomson found McGonigle in the area, and he drew the goalkeeper before hooking the ball past him, but it trickled agonisingly wide of the open net.

Patching then came close with a curling free kick as the game entered the last ten minutes but McGinty flew across his goal to deny Derry.

Sligo were then almost caught out again as Thomson picked out the run of McGonigle for a second time, but the striker could only shoot wide after taking the ball brilliantly in his stride.

The hosts got a second wind in the final minutes and thought they had won it when Keogh danced around two Derry defenders only t be denied by Maher.

But there was nothing that the goalkeeper could do moments later as Keogh smashed the ball past him into the top corner after getting past tired Derry City bodies.