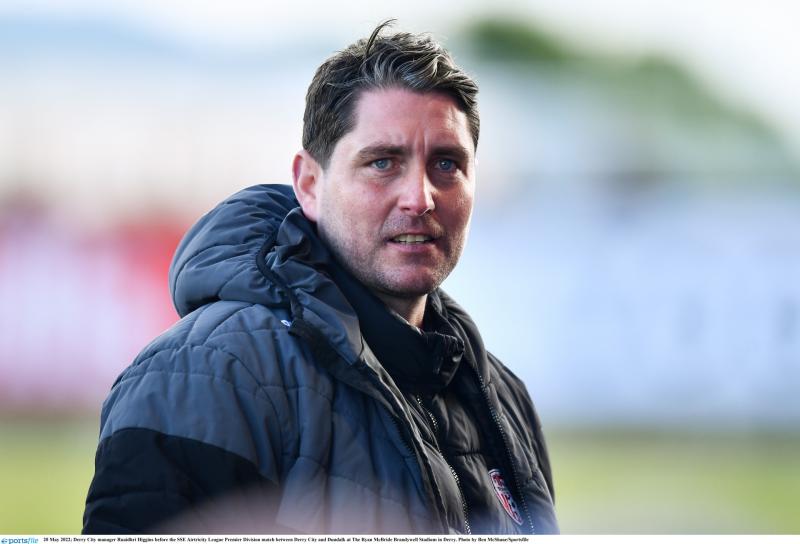 Ruaidhri Higgins is hoping to celebrate his 50th game in charge by leading Derry City to a much-needed victory over Sligo Rovers this evening.

The City boss began his role in senior management with a 1-0 victory at the Sligo Showgrounds 13 months ago, and since then has led his team from the bottom of the Premier Division to the top two. Higgins has won 24 of 49 games in charge at the Brandywell, with his team scoring 77 goals in the process in what has been a time of great progression on the field for the Candystripes.

Derry City head to Sligo Rovers today however in the midst of their most difficult spell in Higgins’ time at the club, after successive defeats to Shamrock Rovers and Dundalk, which comes in a run of just two league wins in the last eight games.

“Every team has a period in the season that’s difficult and there’s no doubt that this is a difficult period we’re going through,” the manager admitted. “We have great personalities and characters in the dressing rom. It wasn’t always going to be beautiful and rosy, so now we just need to man up and try and grind out a win on Monday night and try and get the show back on the road.”

The poor run of form coincides with City struggling in attack with just two goals, neither from open play, to show from the last four games. That lack of ruthlessness has been a serious problem in recent weeks with Higgins admitting his players may have lost a bit of belief.

“I think in the previous few games when you’re playing so well and not winning, you can maybe lack a wee bit of belief,” he explained. “We just need a scrapy win, something to fall for us, and try and get a bit of momentum back that we’ve lost. I’m not going to criticise the players. They know we were way off it first half, but in the second half they fought and scrapped and got themselves back into it. Their goal came out of nowhere because we were obviously the team in the ascendancy at that point. It’s a tough one to take, but we have got to dig deep and stick our chests out and get through this.”

City get the chance to respond quickly with the trip to Sligo today. The Bit O’Red have had an even more dramatic weekend, with the club announcing just yesterday that they and manager Liam Buckley had parted by mutual consent. Sligo, like Derry, are without a win in five games, and Buckley’s assistant manager and former player John Russell will be in charge until a new manager is appointed.

In the meantime, Higgins has every belief that his team can get back on track soon.

“It’s always the case that when you lose a game you want another to come quickly and thankfully, we have one on Monday,” he said. “Sligo is obviously a difficult place to go, but we’ll go there and try and win the game which is what we always do.

“Every team goes through a period in the season that’s difficult and this is a difficult period for us. We were always going to have one, so it’s how we come out of it; be strong, be together and kick on. I know the players are strong enough and capable enough to snap out of this very, very quickly. They just need to keep believing. They are good characters so I have no concerns at that end.”