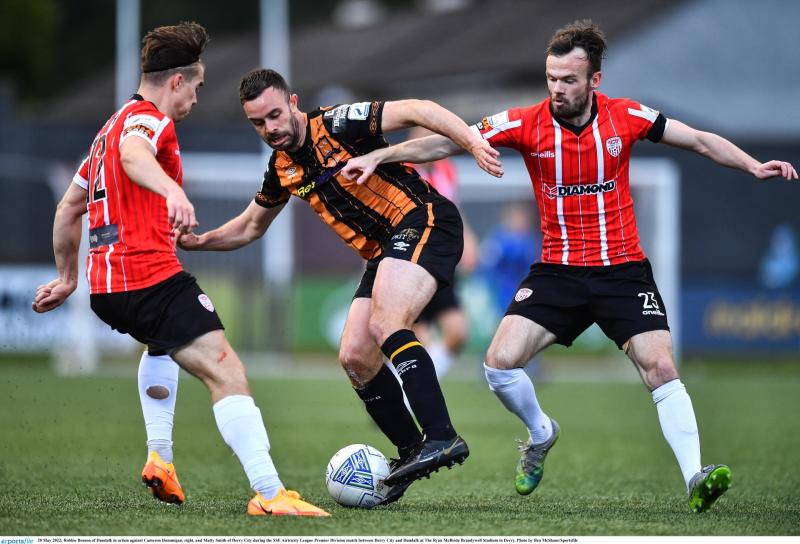 Derry City’s recent struggles continued as they were beaten by Dundalk at the Brandywell with Pat Hoban scoring a late winner for the visitors.

It is successive defeats for Ruaidhri Higgins’ team who have now failed to win in four games and they sit seven points behind Shamrock Rovers after another frustrating night. Dundalk meanwhile have finally got their first away win of the season.

Dundalk got their reward for a strong start by taking the lead just 10 minutes in. Robbie Benson showed a brilliant bit of skill to get away from Cameron Dummigan 20 yards from goal as he turned away from his former team mate before curling a beauty of a shot beyond the reach of Brian Maher and into the net.

Derry slowly worked their way into the game after that setback and Nathan Sheppard was called into action for the first time when he had to push away a shot from Joe Thomson, who was off balance when he connected with Jamie McGonigle’s cross, and didn’t get the power he needed to beat the Dundalk goalkeeper.

Derry’s frustration was only energizing Dundalk, and the hosts got off lightly just past the half hour when Darragh Leahy’s cross towards Stephen Bradley was headed out onto the foot of Benson, who couldn’t repeat the trick as he hit the ball into the ground and it bobbled harmlessly wide. Moments later Bradley rifled a shot just over the bar as Derry continued to live dangerously.

There were some signs of life in the home side, especially in the form of Thomson, who tested Sheppard for a second time, but his overhead kick from Ronan Boyce’s cross was too close to the goalkeeper.

The equaliser finally came just 15 minutes from time when substitute James Akintunde won a free kick on the right side of the Dundalk penalty area before getting on the end of Brandon Kavanagh’s cross to send a diving header past Sheppard from close range.

City had all the momentum after that, but Dundalk stunned them by restoring their lead on 82 minutes. Kavanagh lost the ball outside his own penalty area and John Martin played Pat Hoban in to fire the ball low past Maher to make it 2-1.

The drama didn’t end there however as Dundalk boss Stephen O’Donnell was red carded in the aftermath of the goal, and he had to be escorted away by security after getting involved in some unsavoury scenes in the crowd.

Meanwhile, City continued to look for another equaliser but Dundalk were standing strong on the field as the game reached its final few minutes.

Six minutes of added time gave Derry City some hope and they came agonisingly close to getting the equaliser but Will Patching’s free kick smashed back off the crossbar and stayed out.

The Candystripes do not have long to wait until they are back in action as they travel to Sligo Rovers on Monday.