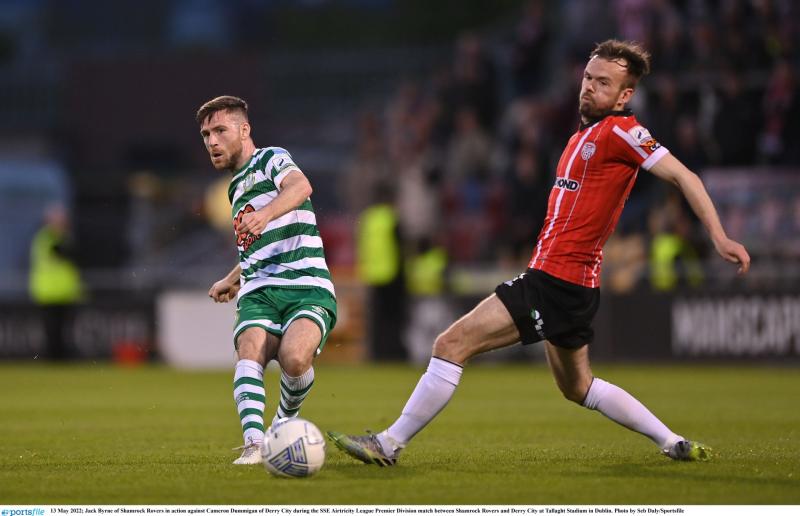 Derry City fell to a 1-0 defeat in Dublin.

A late goal from substitute Danny Mandriou condemned Derry City to defeat in this evening's top of the table clash against Shamrock Rovers at Tallaght.

Ruaidhri Higgins’ team were the better team for most of the game and created three solid scoring chances, but failed to take them and that fact cost them as Rovers struck the only goal on 79 minutes, to send them four points clear at the top.

City had the best early chance to take the lead however when they caught Rovers out on a quick counter attack. Brandon Kavanagh took the ball clear in his own half and picked out the run of Joe Thomson, who in turn found Jamie McGonigle in space on the edge of the area. McGonigle could have taken a shot but he played it cleverly into the run of Matty Smith, who was alone in the area, only for the midfielder’s touch to desert him with only Alan Mannus to beat, and the chance was gone.

Derry were growing in confidence and they were bothering Rovers with their pressing game when off the ball. That pressing saw Joe Thomson win the ball in midfield, allowing Kavanagh the space to cross the ball to the back post where McGonigle arrived and fell it full force, only for Alan Mannus to keep the ball out before Will Patching shot the rebound into the side netting.

Rovers were growing frustrated as the half progressed, a feeling that increased in the ground when Richie Towell sent two shooting opportunities into he night sky. Towards the end of the half the champions became to apply some consistent pressure on the Derry defence, but the best they had to show was a half-hearted effort from Rory Gaffney which trickled wide, in an effort which summed up the first half from the hosts.

Rovers started the second half in more determined fashion but it was Derry who created the first chance when Joe Thomson won the ball in midfield and continued his run forward before playing Danny Lafferty into a shooting position in the area, but again Mannus was there to save his team with an important block.

Rovers were prodding and probing but the best chances were coming Derry’s way. Another came and went on 66 minutes when Brian Maher’s punt forward found Patching in behind the Rovers defence and his low ball across goal found Thomson, but his effort on the stretch was deflected behind for a corner.

It took 75 minutes for Rovers to carve open a chance in this game and it was one they should have taken. After being fortuitously awarded a corner for a Graham Burke shot which hit the side netting, Rovers recycled the ball and delivered it deep into the area. Graham Burke picked up an attempted punch from Maher and laid the ball across goal for Sean Hoare, but the defender blazed over the bar.

Rovers were starting to purr however and on 79 minutes they got the goal they craved but barely deserved. Andy Lyons ran at Ronan Boyce in the area, and his shot was parried by Maher straight into the path of substitute Danny Mandriou, who couldn’t miss from close range.

That goal was enough for Rovers, as they held Derry at bay for the remainder of the game, and after leading the league table by six points just a few weeks ago, Derry City now trail by four points after only their second league defeat of the season.

Derry City are back in action at home to Dundalk next Friday.