'We're going there to win the game!' 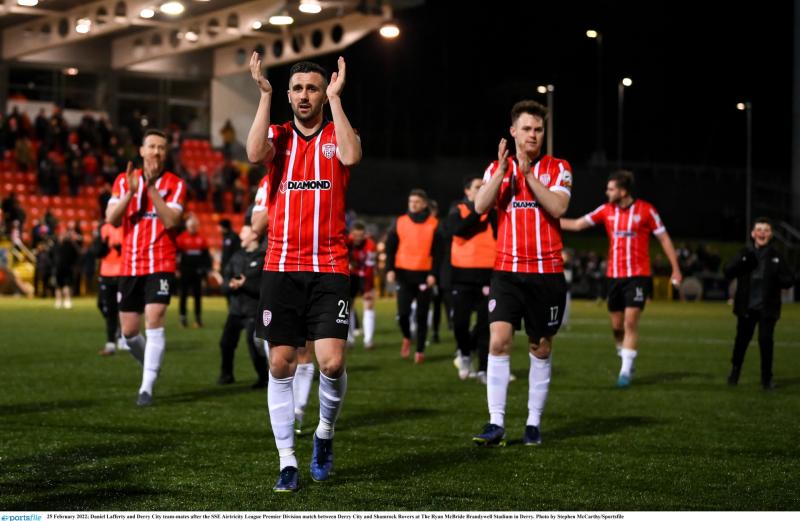 Danny Lafferty insists that Derry City will be going to Tallaght today to attack, and not with the attitude which St. Patrick’s Athletic brought to the Brandywell earlier this week.

The Candystripes were left frustrated on Monday night after dropping another two points at home, despite dominating against an extremely defensive opponent. Coming just 10 days after their 4-0 defeat to Derry City in Dublin, Tim Clancy’s side showed no attacking intent, instead making their priority a clean sheet.

“It was frustrating alright,” Lafferty agreed. “The performance was a lot better from last Friday night so there were lost of positives on that front, but we’re obviously disappointed not to get the three points, because I think most of our play deserved that.

“We got that impression after the first five or ten minutes that they were always going to just try and frustrate us by sitting in deep, happy to defend in their own half. That was the question to us, to come and break them down and try and get in front, but ultimately they got what they came for so credit to them in that sense.”

Dropping four points in one weekend against Bohemians and St. Pat’s has cost Lafferty and his team mates the leadership of the Premier Division, and they now head to champions Shamrock Rovers chasing instead of leading, for the first time in two months.

“It's a massive game,” he acknowledged. “We have a good record in Dublin this year so we will be going there to pick up three points, there’s no doubt about it. We’ll not be going down there and do what St. Pat’s did to us, we’re going to go there and be aggressive and be positive and go there and try and win the game.

“We put a marker down 10 days ago against St. Pat’s away and we’ll be going down there to try and do the same thing again.

“We know how tough it’s going to be, no doubt about it, as they had a good victory against Sligo, but we have enough quality in our team to go down there and definitely get something. We beat them with a late goal up here earlier in the season so we’ll be going down there and confidence is still high. We’re disappointed in the last two results but we’ll be going down there to try and out things right and get three points.”

City are likely to be without Patrick McEleney, who suffered what looked like a hamstring injury in the latter stages on Monday night’s game.

“He had a positive impact on the game when he came on,” Lafferty said. “We’re obviously disappointed to see him go off because he was creating a lot of chances and getting on the ball and making things happen. Everyone knows the quality Patrick possesses, but I’m sure the medical department will assess and see where that stands. There are other boys waiting there to come in and fill that gap.”

City will return to the top of the table with a win tonight, but they will also fall four points behind with a defeat. The margins are thin, and also crucial for both teams.

“We’re not thinking too much about falling behind on points,” Lafferty insisted. “We obviously know that, but that won’t be in our mindset because we’re going there to win the game. We know how good they are, especially at Tallaght and they play some great football down there.

“We’ll be looking to go down there and impose ourselves on the game and put things right from the last week or so here where we’ve dropped points. We should have won the game (vs St. Pat’s), and even last Friday, it was a bit flatter but we still should have won the game. All the boys will recover well and we’ll try and go again on Friday and try to get maximum points.”