'St. Pat's are not coming here to roll over' 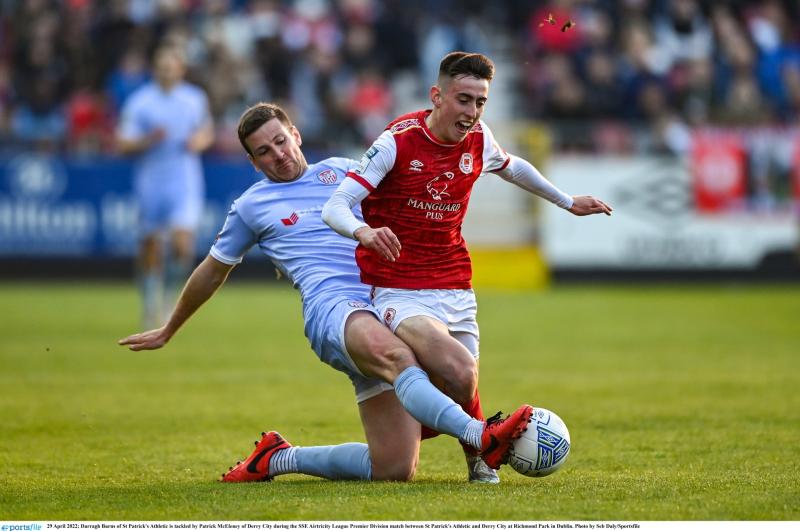 Patrick McEleney has warned that St. Patrick’s Athletic will be coming to the Brandywell to restore some pride after their demolition at Inchicore just 10 days ago. (Kick off 7:45pm)

Tim Clancy’s side suffered their biggest ever home defeat at the hands of the Candystripes last week, with two goals from Jamie McGonigle and one each for Matty Smith and Cameron Dummigan earning an emphatic 4-0 Derry City victory.

St. Pat’s responded well to that loss by winning 4-0 away at Drogheda United on Friday past and they come to the Brandywell this evening with confidence restored and hopefully of making amends for their humbling by Derry just a matter of days ago.

McEleney, who played a starring role in that 4-0 victory, believes tonight’s contest will be a different game entirely.

“I know a few of their players and they are not going to come up here and roll over,” he stated. “They got a brilliant result against Drogheda so it’s going to be a tough one.

Derry City have led the way in the Premier Division for several weeks now but that will be severely tested this week with tonight’s game quickly followed by a trip to Tallaght for a top of the table clash with Shamrock Rovers at Tallaght. McEleney understands the challenges that await.

“There are going to be ups and downs the whole way through and it’s just how you handle them,” he explained. “I think we’re well ahead of schedule. We answered before and we have to answer again and that’s it. If somebody said we would be a point ahead at this stage, I don’t think people would have believed you really so we are doing okay.”

McEleney has made 11 appearances for Derry City this season, and finally completed his first 90 minutes against Bohemians, an important milestone for him personally.

“It was always part of the plan with the staff to always do a slow build, and it was no secret,” he said. “It was a horrendous injury last year but I feel good and I’ll go again on Monday.”

Bohemians were furious with the decision to award Derry City a penalty when McEleney went down under a challenge from Conor Levingstone, but the player himself was certain that referee Adriano Reale got the decision right.

“I thought it was a penalty,” he shrugged. “I got goal-side and he’s bumped me. If I’m him I don’t go near me. He shouldn’t make contact so for me it’s a penalty all day. He hit me and once toy feel contact and you’re in the box, there’s only one thing you’re doing.”

One thing McEleney did agree on was the disappointment of two points dropped, made worse by Shamrock Rovers’ facile win over Finn Harps at Tallaght.

“It was frustrating,” he agreed. “Even out there it felt frustrating. It was one of those nights when we weren’t really at it but we still came out with a draw, but we still want to be winning these games. They were buzzing with a draw. They were celebrating a draw and they were in the corner with the ball, so good luck to them.

“Even up to their goal I don’t think we were good. We were too slack in possession, myself included. One you’re slack in possession, they can break on you and they were sitting in to break on us and we got hurt and that was down to us boys more than the back line. We just have to focus on ourselves now.”