Derry City held by Bohemians at the Brandywell

Lead at the top cut to one point again 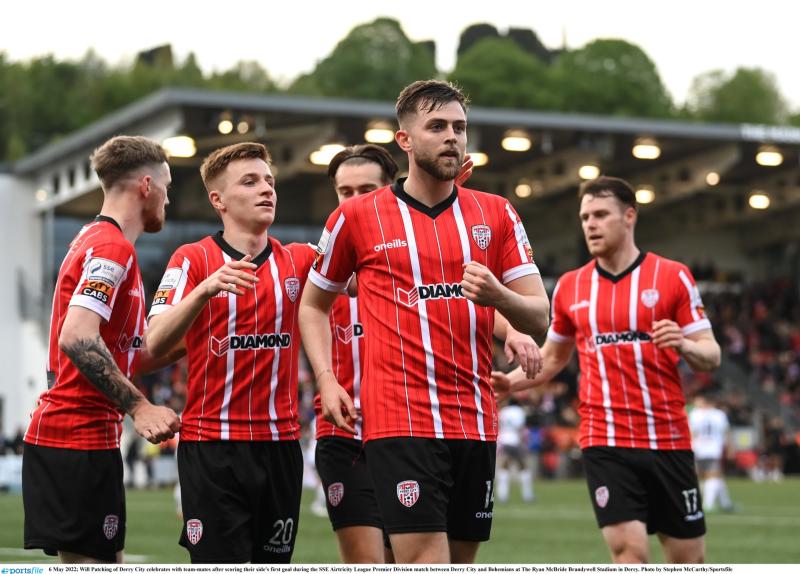 Will Patching scored from the penalty spot for Derry City.

Derry City’s lead at the top of the Premier Division is back down to one point after they could only draw with Bohemians at the Brandywell.

Will Patching’s penalty cancelled out Promise Omochere’s early goal, but the Candystripes could not find a second goal, and with Shamrock Rovers easily defeating Finn Harps, the lead at the top has been cut again.

Bohs started the game confidently and enjoyed a good period of pressure on the Derry goal, a spate of corners and free kicks testing the home defence, and Brian Maher had to make the first save of the game when he tipped over a header from Ciaran Kelly.

A promising start from Bohs was rewarded with the opening goal on 15 minutes. Brandon Kavanagh failed to control the ball on the edge of the Bohs area, and Liam Burt led the visitors away on a lightning counter attack, carrying the ball a good 60 yards before slipping in Promise Omochere who slotted the ball past Brian Maher and into the net.

Bohs were filled with confidence, especially after that goal, and they came so close to making it 2-0 when Omochere crossed from the left and Junior showed tremendous skill to outfox Eoin Toal to set up a chance, but before he could get a strike at goal, the City captain got back to deflect the ball behind for a corner.

After a very difficult opening period, City finally began to click and they equalised on 35 minutes, although not without some controversy. Patrick McEleney exchanged passes with Kavanagh and broke into the box before being bundled to the ground by Conor Levingston. To the disbelief of the Bohs players, referee Adriano Reale pointed to the penalty spot, and Will Patching kept his nerve to send James Talbot the wrong way for his seventh goal of the season.

Derry were out of the blocks quickly in the second half and Patrick McEleney had Talbot scrambling back with an audacious effort from 40 yards that just cleared the crossbar.

Talbot was then just a spectator as Will patching’s free kick from 25 yards beat him all ends up, but fortunately for Bohemians, the ball cleared the upright by mere inches.

The hour passed without City coming any closer and Ruaidhri Higgins changed it up by swapping James Akintunde for Matty Smith.

It could well have been 2-1 Derry within seconds of Akintunde’s arrival as McGonigle raced past Bohs substitute Max Murphy, but with his team mate awaiting a pass, the league’s top scorer went for goal from a difficult angle and sent the ball straight into Talbot’s arms.

Bohs, who had barely looked a threat for the entirety of the second half, had an incredible chance to win the game on 78 minutes. Substitute Tyreke Wilson sent a cross straight onto the head of Omochere, but he headed straight at Maher from close range much to the disbelief of his manager Keith Long.