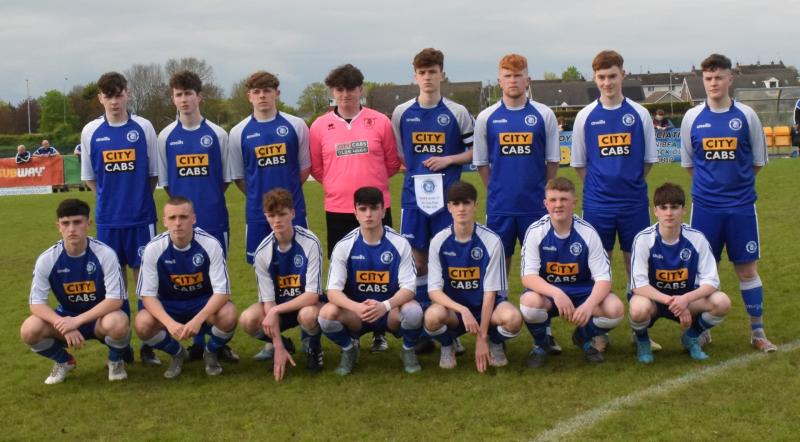 The Trojans team which won the Subway NIBFA National League Northern Ireland U17 Cup this week.

Derry City manager Ruaidhri Higgins helped Trojans to an historic Northern Ireland Cup win earlier this week, with a surprise team talk at the Brandywell ahead of the final.

Believing they were heading to the Brandywell for a team photo, the Trojans youngsters were shocked when they were joined by the City boss, who met them with words of wisdom and advice ahead of a huge game against Celtic Boys.

The game, played at the Lurgan Town Arena on Monday, saw the Creggan team dig deep to bring the trophy back to the Northwest after a nervy and tense final.

The opening goal of the game was scored after just six minutes when Zack Dougherty headed in from a corner to give Trojans the perfect start.

The second goal came just seven minutes into the second half and again it was a corner which proved Celtic’s undoing, when John McCrory’s cross for Harry Boyd to score. Celtic did manage to pull a goal back and that led to some nervous moments for the Derry side, but Trojans hung on to win the game and the trophy.

It was a fitting way to win the trophy for team coaches Jim McGuinness, Niall Creagh and George Dunlop as it transpired Trojans’ final game before lockdown two years ago was against the same opponents. Having to sit out since then, it has been a long road on the way to winning this competition.

“They are a close-knit bunch of boys who have been kept together all during covid,” McGuinness explained. “The boys were determined to go for it because this was an U17 competition and we were playing in U18 in National League. This is our own age group so we targeted this and got the result we wanted. It’s a nice feeling because it has been a long road but we got what we set out for and that’s all you can ask of the boys.”

The road to the final started with victory over fellow Derry side Tristar, before trips to Aquinas, Dundela and Glentoran followed. There were plenty of miles chalked up on the way to the trophy.

“We’ve been drawn away in every round and we were laughing because we were classed as the home team in the final but we had to play it in Lurgan,” McGuinness admitted.  “We started off the day meeting Ruaidhri Higgins who gave the boy a good talk ahead of the game. From there we went to Kelly’s in Omagh for a pre-match meal before we headed to the ground. The boys were very well behaved and focused. We had them from 10 in the morning until 10 at night and never once did we ask anything of them, other than putting on a performance and that’s what they did. 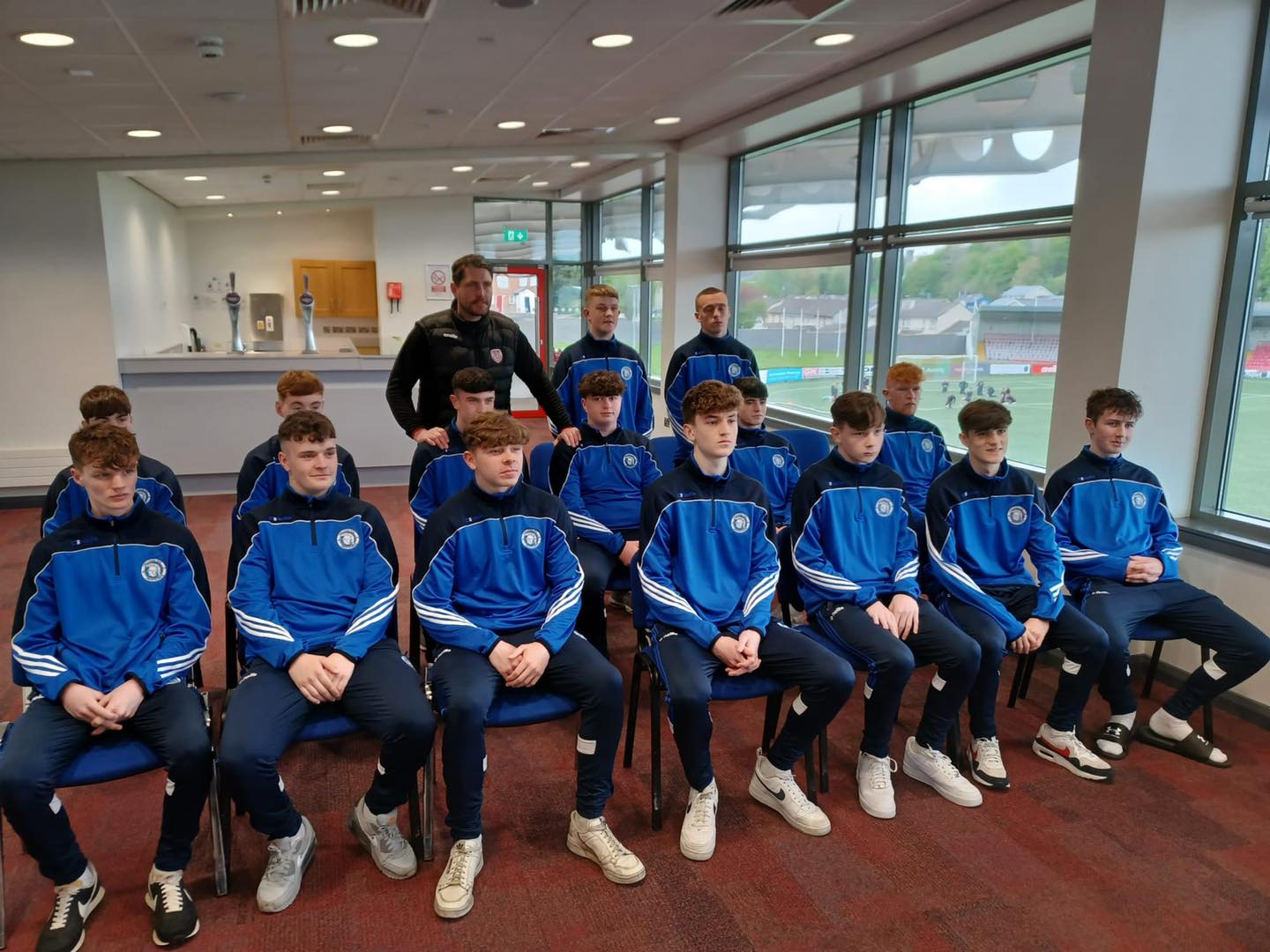 Meeting Higgins was the perfect boost to start a long day on the road, and McGuinness admitted that none of the players knew anything about the surprise before the game.

“We hadn’t told them about it,” he said. “We told them they were going to the Brandywell for a team picture before they left. The Derry team were training there and we went upstairs and Ruaidhri came up and spoke to them and he spoke very well. They were very impressed. They have a lot of respect for him because he’s the Derry manager and they really took on board what he said as well.

He told them that Derry people never get anything easy and they have to fight for it, and they definitely did that. Ruaidhri invited the boys to the Brandywell for the St. Pat’s game next Monday, which was a nice gesture. He said ‘I expect to see youse at the Brandywell parading the trophy’, and that stayed with the boys because they were talking about it after the match.”