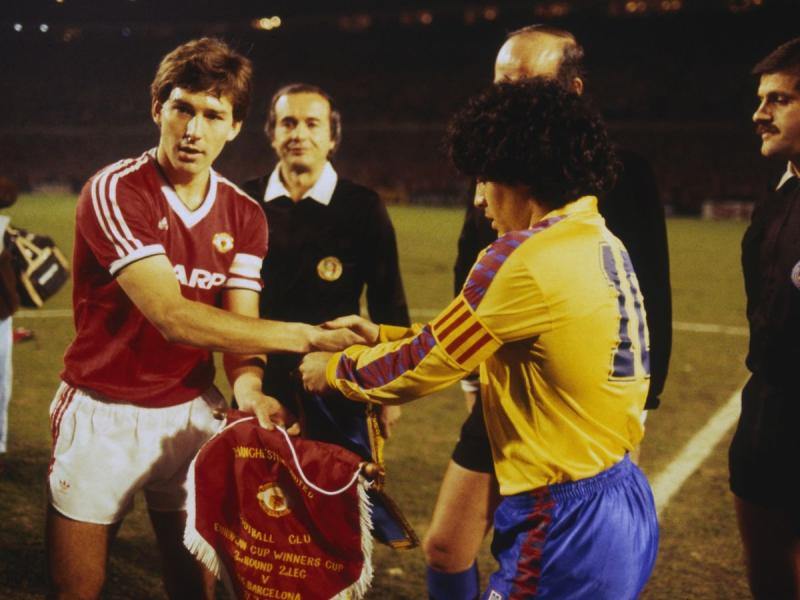 Bryan Robson pictured with Diego Maradona on one of the most famous nights of his career back in 1984.

Manchester United fans have the opportunity to meet one of their club’s greatest icons this weekend when Bran Robson comes to Derry at the invite of the Ryan McBride Foundation.

Be it ‘Captain Marvel’ or ‘Robbo’, the midfielder was hailed as one of the finest players of his generation and remains the hero for many United fans, who are today pining for a player of Robson’s quality in their current midfield.

The plight of Manchester United in 2022 is sure to be one of the topics of discussion at the Everglades Hotel this Sunday, with Robson one of two special guests at the McBride Foundation Annual Fundraising Dinner.

Robson made almost 350 appearances for United between 1981 and 1994, was one of the finest players of his generation and was the first captain to life the Premier League trophy, doing so twice in 1993 and 1994. He also captained United to three FA Cups, one League Cup and the European Cup Winners’ Cup.

Gareth McCay, from the Ryan McBride Foundation, admits it is an exciting coup for the organisation.

“When you sit down and watch his documentary and look what he has done with his career and some of the Man. United teams he played with, he was the player who dragged them into FA Cup finals and winning those trophies,” he said.

“He wasn’t part of the class of ’92 so he didn’t have all these great players around him, so he was a great player in his own right and he definitely achieved a lot. Even his managerial career was out of the norm; when you look back at his time with Middlesbrough it was crazy, with players like Ravenelli, Juninho and Emerson coming to Middlesborough. He has achieved a lot in his career and we’re excited to have him over.”

The evening will start with a drinks reception at 6:30pm, followed by dinner at 7:30pm, with a Q and A to follow. Local character Tony ‘Conka’ McBride will MC the event.

“Anyone can come and have a photograph with Bryan with the professional photographer there,” McCay continued. “You can have a chat with him also. It will be quite informal and there will be no phones or recordings so he can speak freely and he might have a thing or two to say about how things are going for Man. United at this moment un time. We are hoping also to take questions from the floor and hopefully we can keep it informal, enough and everyone can enjoy their night.”

As well as Robson, Republic of Ireland manager Stephen Kenny will be in attendance. An ambassador of the Foundation, the former Derry City boss has always been a great supporter, despite a very busy schedule.

“Stephen is all over the place,” McCay laughed. “Every time you speak to him he’s in Swansea or Birmingham; it’s a pretty full on schedule. He only does things 100% or nothing so we’re very lucky that he’s even in the country the night that this is on. He’s making a great effort to come up and that has not gone unnoticed by us. We really appreciate it and it speaks a lot for the type of person Stephen is and the regard he held Ryan in also.”

The Ryan McBride Foundation will continue to do great work with the local community throughout the year, with McCay explaining how important it is that football is easily accessible to local kids.

“Like a lot of voluntary groups, we’re trying to get back on our feet after Covid,” he added. “We’ve had two years when we haven’t been able to do anything. We depend on funds coming in to supplement the courses that we run -for example we run football camps all day for £5, but we haven’t been able to fundraise for a while. If it wasn’t for donations and fundraising we couldn’t offer these schemes at these prices. We like to keep football affordable for families and we’re trying to make it so that cost is never a barrier to playing football. That’s the thinking behind these kind of events on Sunday, so we can raise the funds to give something back to the community.”

Individual tickets are still available for Sunday night’s event, priced at £65 each. Tables of 10 are also available. Anyone interested in attending or supporting the event is asked to contact the Ryan McBride Foundation Facebook page or online with EventBrite.