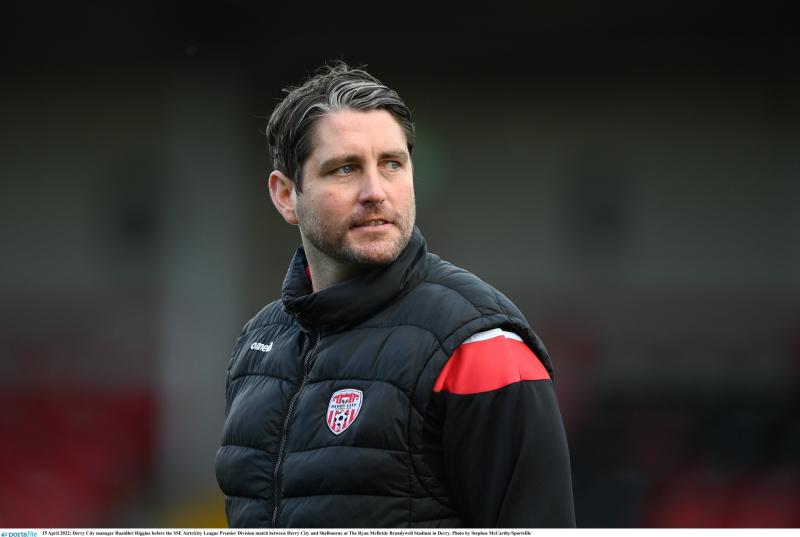 Ruaidhri Higgins has been in charge at Derry City for one year today.

Since being announced as manager on April 23 last year, Higgins has taken the team from the foot of the Premier Division to the top of the table, lifting the hopes and expectations of the fans to its highest level in years along the way.

As well as qualifying for Europe this year, Higgins has also brought some of the best and biggest names in the country to the Brandywell, with Patrick and Shane McEleney, Michael Duffy and Will Patching all returning, while Cameron Dummigan and Jamie McGonigle have proved exceptional signings alongside talented youngsters Brian Maher and Brandon Kavanagh.

Victories over Dundalk and Shamrock Rovers along the way, plus a match-winning habit of scoring late goals has created an excitement amongst supporters rarely seen in the last decade.

The fact that Derry City are even in the same breath as Rovers when it comes to title talk this season shows just how big an impact Higgins has made in his short time at the club, with the former midfielder raising standards with a long-bred winning mentality.

He celebrated his anniversary with the biggest league win at the Brandywell since 1991, and he admitted it was a nice way to celebrate the milestone.

“It was a lovely way to celebrate it. It’s been an absolutely fantastic year with a lot of hard work and the players and staff have been a joy to work with,” he said. “It’s a huge privilege to be in the job and I hope I’m here for a long time, but we need to keep winning matches or that to be the case.”

Last night’s game was over as a contest long before half time and Higgins was delighted to see his team be ruthless for the first time this season.

“We got ourselves into a really comfortable position in the game and it gave us the luxury to make changes and rest key personnel,” he reflected. “What we asked for through the week was to become more ruthless and I think I made that clear after the game in Drogheda and we certainly got that. We created a number of other chances as well but we were ruthless in the first half and the game was over at half time. I don’t think you see many scores like that in our league, so we’re delighted with it.”

While the game might have been done at 5-0 at the break, Higgins wanted even more goals to send the fans home happy.

“What we said at half time was that we wanted to win the second half as well,” he continued. “People pay good money to come and watch and it’s important that we don’t send them home bored; we keep trying to create chances to score goals. We scored a couple but we did create another few chances so I was delighted. I have to say I’m thrilled with the players’ professionalism and application in how we attacked the game; it was exactly what we asked for.”