Huge game for Richard McCarter and his players 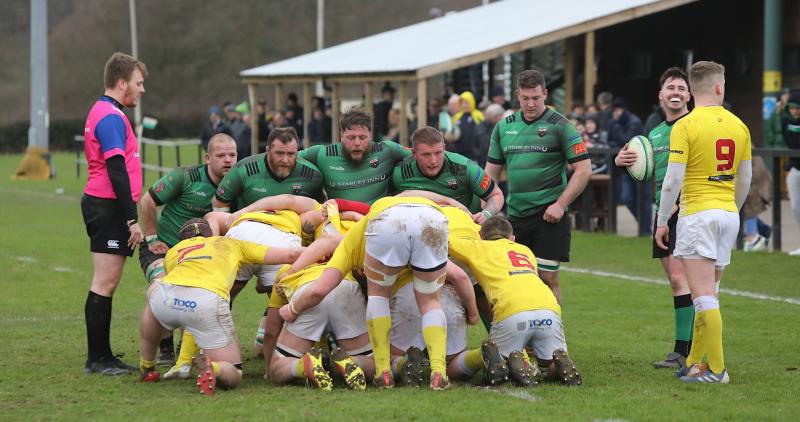 Clonmel vs. City of Derry

City of Derry will fight for their All-Ireland lives today as they head to Clonmel for the first leg of their Division 2C relegation play-off.

A league season which began with a demoralising defeat in Tullamore ended with a heart-breaking victory over Tullamore at Judges Road, with the Derry players falling just short of saving themselves courtesy of events 250 miles south. A Sundays Well penalty nine minutes into added time earned them a dramatic win over Clonmel, ensuring they finished outside the bottom two by the narrowest of margins.

It means that Richard McCarter and his players must take part in this two-legged play-off, with the future of the club in senior rugby now at stake.

“Obviously the way things happened, that afternoon was hard to take at the time, but the week off last week has allowed us to get our heads straight and we’re really focused now for these last two weeks so we need to give it a big push,” McCarter said.

“It’s just a pity because the last month or two we’ve been playing really well. We’ve won three of our last five games in the regular season. We have confidence now probably for the first time this season and we’re playing well with a bit of momentum, but we can’t get ahead of ourselves because we have two cup finals left to go, and that’s how we have to treat these games.”

Derry’s last visit to Clonmel in February is memorable for the wrong reasons for McCarter and co. with the 27-12 defeat coming on the back of a last-minute pitch change, which certainly did not go down well with the visiting team.

“They told us about half 11 or 12 on the morning of the game that it was going to be moved to a 4G pitch, so kick off had to be delayed,” McCarter recalls. “It wouldn’t need to happen this weekend because it really threw us off last time. We didn’t have any time to prepare in our warm up and we couldn’t even get our water bottles filled; a team manager had to actually knock at a man’s house who lived near the ground to get the bottles filled so we can’t have any of those shenanigans this week.”

Both teams have beaten each other once this season, but McCarter is expecting a much different game than the one at Judges Road back in November when Derry earned a 9-6 victory. With players returning, form improving and the circumstances substantial, the Derry boss is expecting a much more exciting game.

“I think we’re in a different place personally as a team,” he admitted. “When we played them at home, it was a real, tense narrow victory. We didn’t play particularly well in the away game with everything that went on off the pitch. On the pitch we went down with half a team and we didn’t play well, so Clonmel probably haven’t seen the true Derry this season, which is maybe not a bad thing.”

Those recent victories over Bruff, Sundays Well and Tullamore, complete with bonus points against Bangor and Enniscorthy mean that City of Derry head into their most important games in years in excellent form. Rather than look at the play-off over two legs however, McCarter is treating it as two separate fixtures, with the aim to win this weekend ahead of the return leg at Judges Road on April 30.

“It is a unique situation with the two matches,” he said. “I’ve been involved in a couple of play-offs as a player where it’s just winner takes all, but certainly we have to see it as two separate games and we have to win both games, and if we do then well be fine.

“I suppose having that second leg, if things don’t go to plan this weekend, we’ll have a second bite of the cherry. But we have to see it as two separate games and not be thinking about if we get beat by a certain amount we’ll have to win by a certain amount. We just have to go for two more victories and we’ll be okay.”