Candystripes on fire as they get back to winning ways 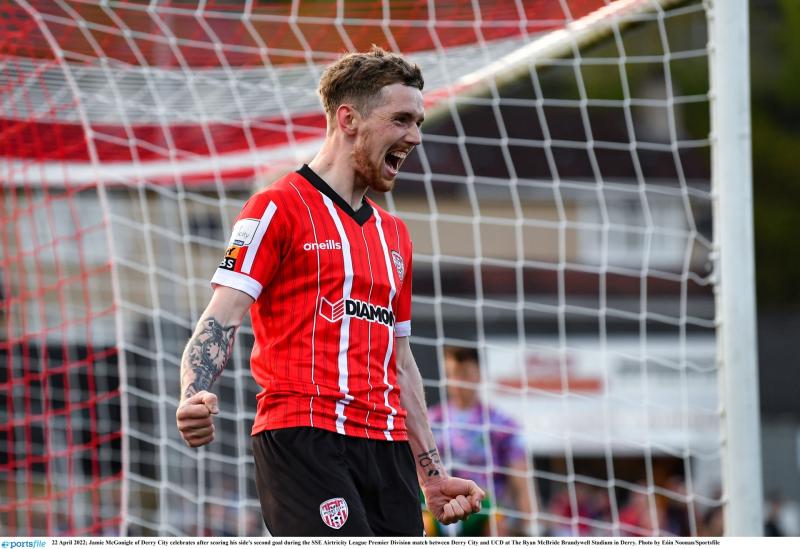 On the weekend that Ruaidhri Higgins celebrates a year in charge at the club, his team produced a sensational display of attacking football to retain their place at the top of the Premier Division.

The game was over at half time with City 5-0 in front.

An early goal was on the cards and so it proved as City opened the scoring on 15 minutes. Patrick McEleney received the ball in space in midfield and picked out the run of Will Patching onto the area. Patching took the ball down under pressure before drilling it low left-footed past Lorcan Healy to make it 1-0.

UCD quickly fell apart after that as Derry City put the game beyond them by the 23rd minute. The second goal was picture perfect as Dummigan’s high ball picked out the run of McGonigle in behind and the striker made no mistake as he scored his first goal in seven games.

City wasted no time and made it 3-0 within 60 seconds as Brian Maher’s ball forward was enough to put McGonigle in behind again, and he took the ball onto his right foot beyond shooting low past Healy for a second time in a minute.

It was quickly becoming emphatic for Derry and embarrassing for UCD as it became 4-0 on 34 minutes. Will Patching this time turned provider as he popped up on the left and his pinpoint cross picked out the run of Cameron McJannet who headed down into the net from close range.

It was simply a matter of how many Derry City could get before half time and Cameron Dummigan celebrated his first goal for the club with an effort from distance which somehow eluded the goalkeeper.

Ronan Boyce headed in Derry’s sixth in the early stages of the second half before McGonigle completed his hat trick with a brilliant left-footed shot.

UCD pulled a consolation back through Alex Nolan but this was Derry City’s night as they hit seven goals in a league game at the Brandywell for the first time since 1991.