Derry City's lead down to one point after Drogheda draw 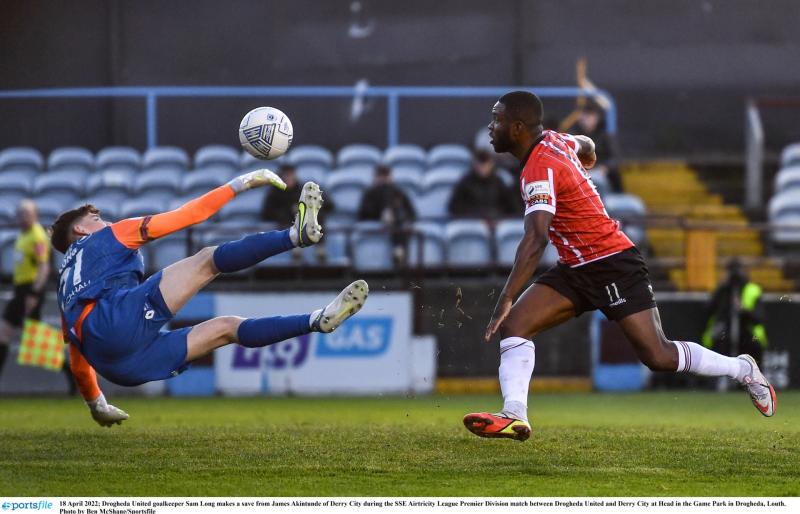 The key moment as Sam Long saves from James Akintunde.

Derry City’s lead at the top of the table is down to just one point after they were held at Drogheda United.

Joe Thomson’s first half goal was not enough for Ruaidhri Higgins’ side, as Ryan Brennan’s header made it six games unbeaten for Drogheda.

A fairly even contest really kicked into life as the game hit the half hour mark. Following their best spell in the game, City broke the deadlock an in spectacular fashion when Boyce found Thomson 20 yards from the Drogheda goal. The ball sat up for the midfielder, who needed no second invitation as he drove it ferociously past Sam Long and into the net for his second goal of the season.

It should have been 2-0 on 37 minutes, and would have been but for a wonder save from Long. Danny Lafferty broke clear again down the left and his low centre looked perfect for James Akintunde to tap in from just two yards out, but the goalkeeper somehow kept the ball out, with Akintunde unable to believe he hadn’t scored.

That miss proved very costly for Derry as Drogheda equalised within minutes. The visitors weren’t able to clear properly from yet another corner and when Heeney sent the ball back in, Evan Weir met it with a miscued scissors kick which turned into the perfect assist for Ryan Brennan to nod past Gartside from close range.

Derry should have restored their lead just past the hour mark. It was Thomson who played the decisive pass, sending Smith through on goal, but Long was out of his goal quickly to block the shot from the Derry forward before Andrew Quinn hacked the loose ball away to safety.

Higgins then made a triple substitution in a big to win the game for his team – with Patrick McEleney, Brandon Kavanagh and Jamie McGonigle coming on for Danny Lafferty, Joe Thomson and James Akintunde.

It almost worked within minutes as Drogheda failed to clear from a corner and when the ball was returned into the area, McGonigle was first to react, but again Long was there with the crucial block to send the ball behind for an increasing number of corners for the visitors.

It was Derry City’s best period of the game, but it faded out and Nathan Gartside had to save from Dayle Rooney following a rare Drogheda attack as the game entered the last 10 minutes.

It was almost incessant Derry pressure in the closing stages and Ronan Boyce sent a header against the post from a Patching corner before Rooney cleared the loose ball off the line. But it just wouldn’t go in for Derry whose lead at the top has disappeared following Shamrock Rovers’ win over Dundalk.