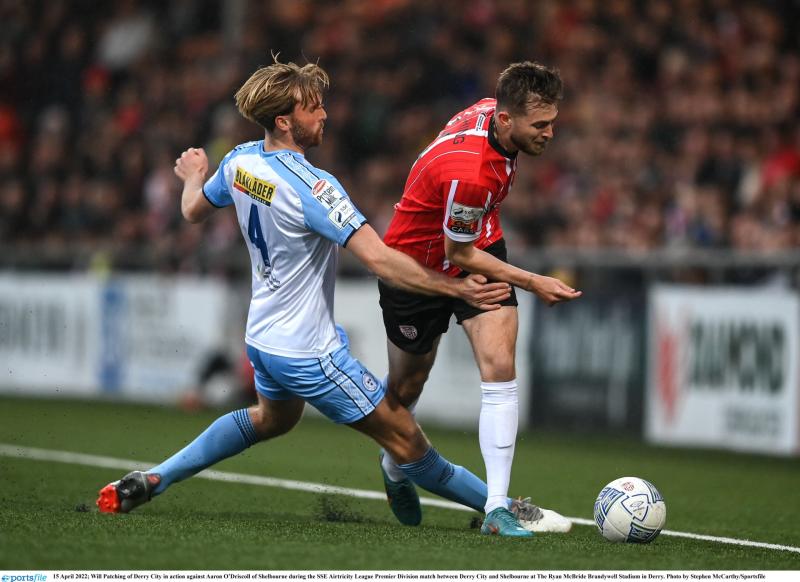 Derry City fell to their first defeat of the season as Shelbourne overturned a half time deficit to stun the Brandywell.

It all looked to be going the Candystripes’ way when James Akintunde gave them a first half lead but the home side didn’t build on their dominance and paid the price in the second half with goals from Shane Farrell and Brian McManus giving Shels all three points.

After a dominant spell, Derry City got the breakthrough goal on 31 minutes. Will Patching saw the run of James Akintunde into the area and found him, but the forward still had a lot to do as he controlled the ball before turning, holding off Aaron O’Driscoll and shooting low past Clarke into the net.

Shelbourne showed much more attacking intent in the first five minutes of the second half than they did in the entirety of the first half, and they came within inches of equalsiing when Dan Carr sent a low effort just wide of Gartside’s post with the City goalkeeper scrambling across goal.

The Shels threat paid off on 68 minutes as they equalised but it was a mistake of Derry’s own making when Brandon Kavanagh was dispossessed 30 yards from his own goal and Ledwidge played Shane Farrell in on goal and he rolled the ball accurately into the corner beyond the reach of Gartside to make it 1-1.

Derry thought they had restored their lead immediately when Cameron McJannet headed in from a corner, but the goal was ruled out by the linesman’s flag, much to the dismay of the home supporters.

City did not respond at all well to that equaliser and within minutes they found themselves behind. Substitute Brian McManus was first to react to a loose ball 20 yards from goal and he drilled the ball brilliantly beyond the dive of Gartside into the bottom corner to give the visitors the lead.

It left Derry with 15 minutes to save themselves, and it looked like the equaliser would come when Brendan Clarke spilled an effort from Cameron Dummigan, but Jamie McGonigle was unable to finish the rebound with the goalkeeper blocking again.

It took a heroic block from Aodh Dervin to save Shelbourne with just two minutes remaining. Quick passing between Matty Smith and Joe Thomson saw Patching put through on goal, but just as he got his shot away, the Shels man arrived to deflect the ball behind for a corner.

Aodh Dervin saw red in the closing stages of stoppage time, but from the resulting free kick Will Patching could only shoot into the side netting and with that, the game was up.