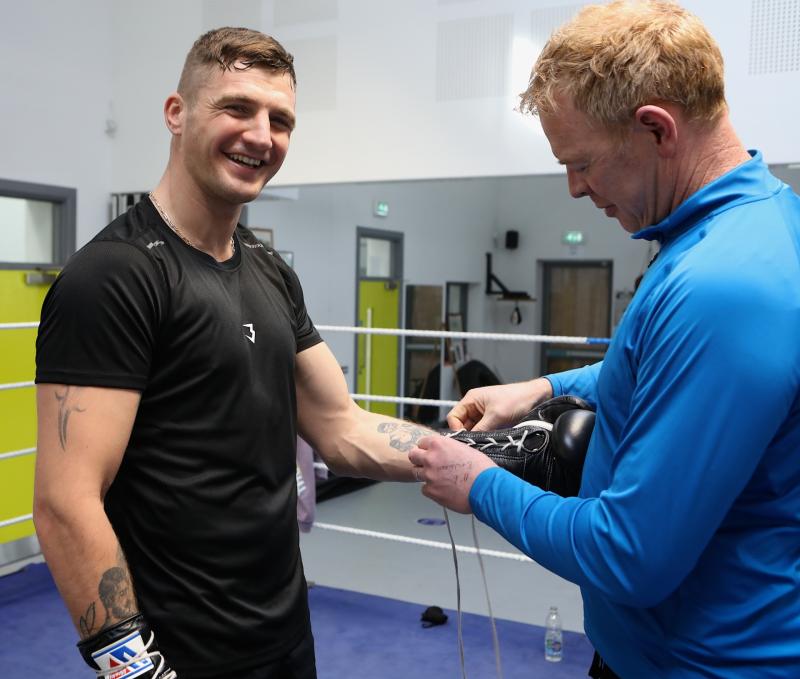 CONSTANT SUPPORT … St. Joseph’s ABC Cahair Duffy tapes Connor up ahead of one last training session before his return to America.

For Connor Coyle, the thousands of miles travelled, the setbacks, injuries and disappointments, the hard times away from his family, will all have been worth it when he wins the vacant WBA title next month to finally break into the top ten middleweights in the world.

The word ‘when’ is deliberate, because barring his hand being raised and the belt being put around his waist, it is already a done deal for ‘The Kid’. He has come too far now to be stopped, and when Antonio Todd steps into the ring with the Derry man in Orlando on May 21, he will follow the other 15 opponents Coyle has faced down on his way to this moment, as nothing more than a step in the path of a boxer who firmly believes he belongs at the top.

“Without a doubt this is the biggest fight of my career,” he says. “This is my world title fight. This is a WBA title and this puts me right in the mix to have the opportunity to fight for a world title so this is massive.

“We will get that fight out of the way and we’ll just progress forward from there. I’ll be coming back to Derry after this fight but I don’t know how long I’ll be home for because I could get a phone call just a few days after the fight, which I probably will because I’ll be number 10 in the world. I don’t know when I’ll be back in America, but I’m pretty sure it will be soon.”

Coyle flew back to the United States on Monday having spent the last two months at home following his TKO win over Rodrigo Lopes Rodriguez in February. This summer was always going to be about that top ten, a prize that he has had to wait on through a variety of delays and setbacks, pandemic and otherwise. 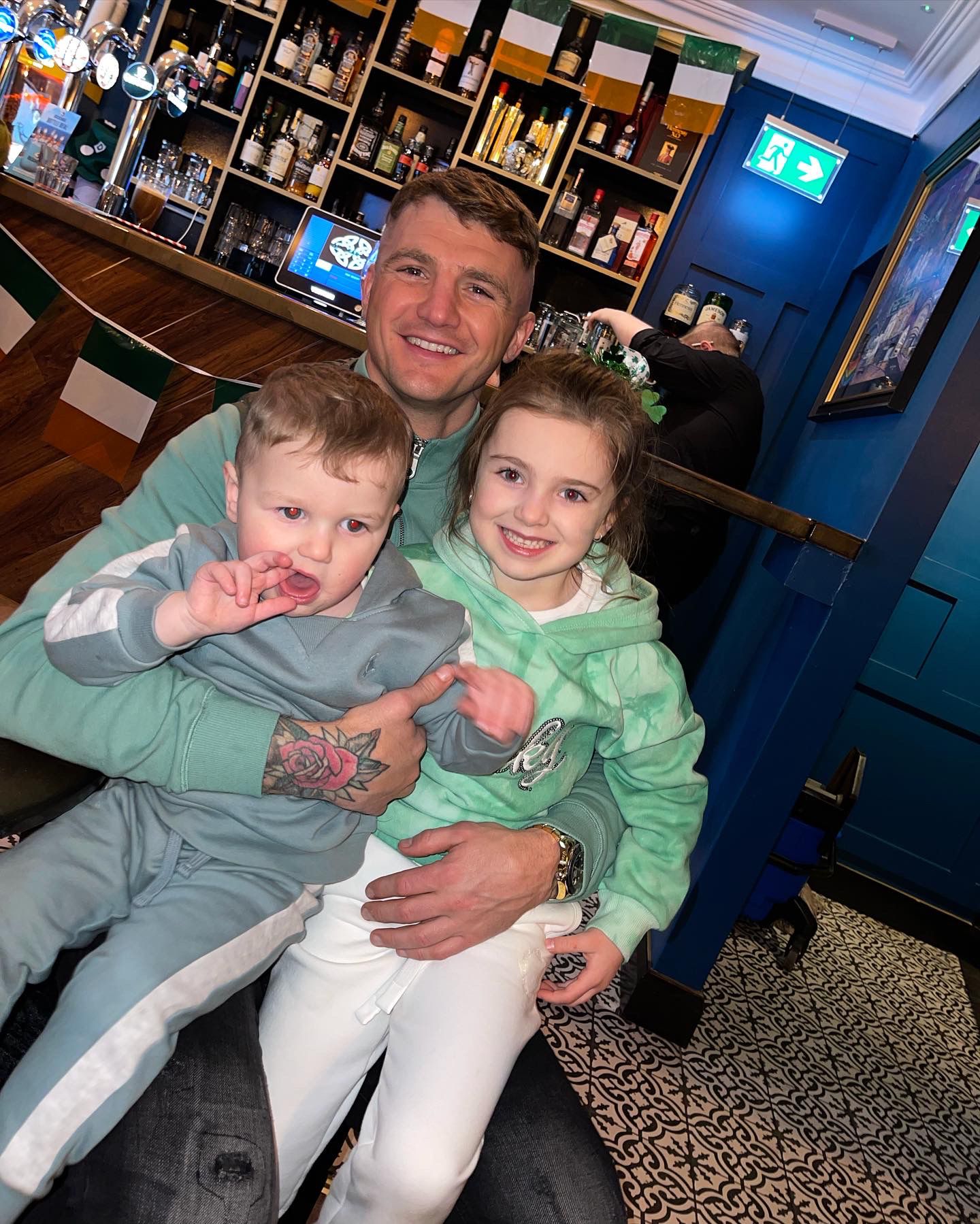 THE FUTURE… Connor with children Clodagh-Rose and Calaeb.

“I’m definitely not a patient person,” he laughed. “It’s not easy but that’s boxing. These things happen and you just have to be prepared for the unexpected. We seem to have a clear path now going forward. Everything we have worked for it’s all starting to line up and all we have to do now is just knock them down and keep moving forward. The big fights are in sight now and they are going to happen pretty soon, with the first one happening on May 21.”

Coyle has certainly been catching the eye of some big hitters in the middleweight scene, his well-documented offer from Chris Eubank junior quickly followed by an offer to join Demetrius Andrade for sparring ahead of his title fight over Jason Quigley back in November.

“I had a bit of a confrontation with Andrade after my fight in Boston,” he reveals. “We had words after the fight. He was just doing a bit of mouthing so I don’t like hm anymore and I won’t be going out to help him if his coach calls me again. I’m going to put a pin in that now. He was just acting a mouth, which boxers do, but I was being nice and introducing myself and he just started slabbering on front of all his friends so I walked away from him.

“The Eubank fight is something we’re still interested in. He’s in the top ten with the WBA and I’ll be in the top ten and that will be a fight we’re looking to push; it could even be possibly at the end of this year or the start of next year. That’s if they take it as well, because they might not take it with a full training camp behind me. I wasn’t impressed with his last fight against Williams and I wasn’t impressed with Williams either and both of them are fights that I feel I can win.” 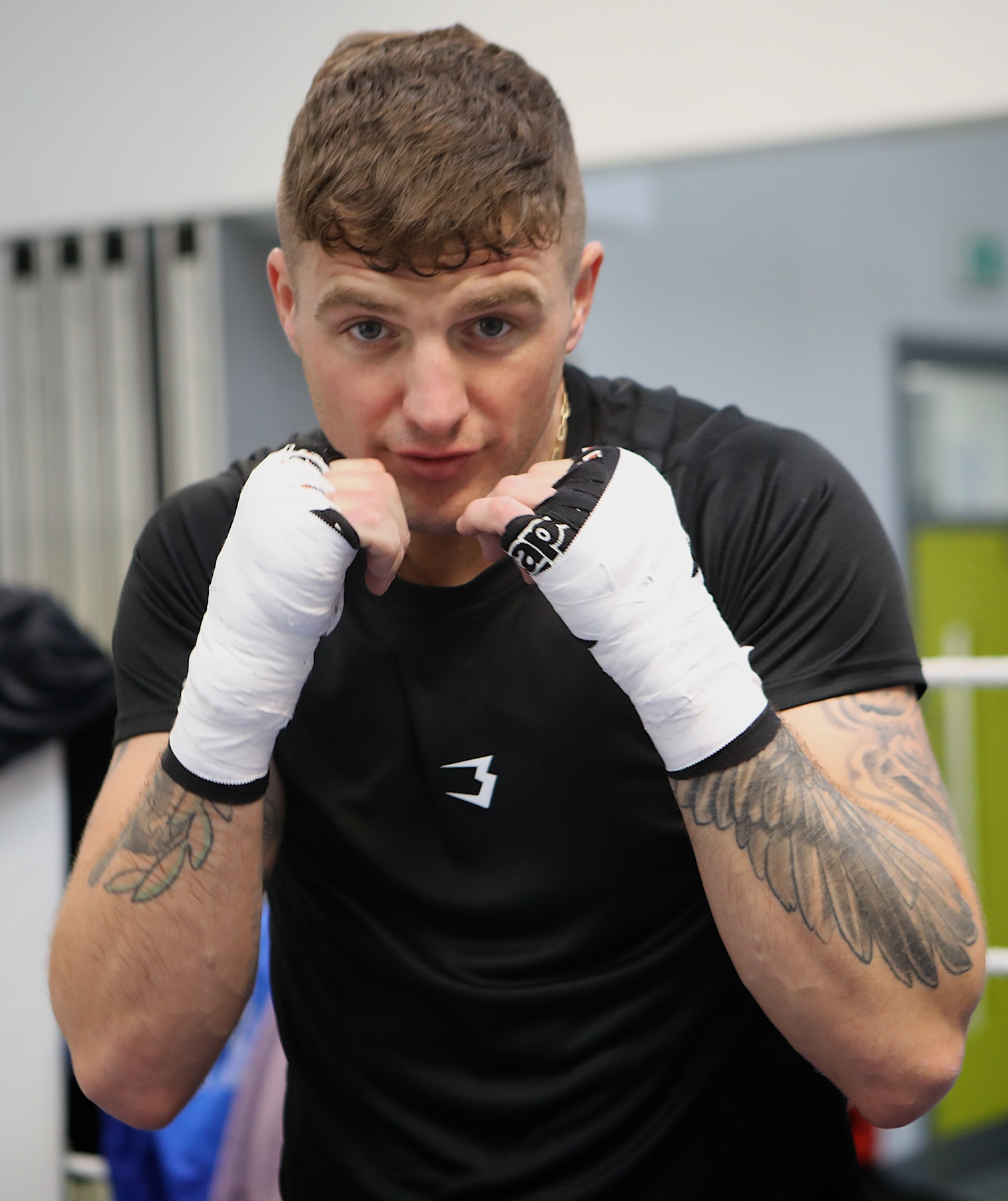 At this stage of the game, Coyle will meet more skilled and dangerous opponents than ever before, but he is so eager to be tested at a higher level than he is certain it will only bring the best out of him. He wants the best, because he feels he can beat the best.

“I’m always confident in my own ability. With the level of opponents I’ve been in the ring with so far, I’ve always known I’m better than them. I know the opposition is going to step up, but I know with the top fighters in the world as well, I know that I can beat them.

Be it running the roads of Derry or the streets of Orlando, Coyle has always had his eye on the bigger picture. In his early thirties, Coyle is in no panic about Father Time, believing he is in the best condition of his career.

“I feel like I have grown into myself,” he explains. “I feel like I’m bigger and I feel that I’m stronger. I’m 31 now and I’ll soon be 32, but I’m a fresh 3-year-old because I never took punishment in sparring or fighting in the last 20 years so I’m going to be fresh. I have a good lot of years left as a pro boxer.

"I feel stronger, faster and better and the more experience I get in those big fights, the better I’m going to get. It’s inevitable. It’s going to happen. I’m not a one-trick pony, I’m always learning and I have the ability to adapt quickly.”

Just one man stands between Coyle and his long-time goal of breaking into the top ten and that is a man who shocked many when he defeated Hugo Centeno at the start of the year. Unheralded before that, Todd’s stock has risen since, but Coyle remains confident.

“I’m just going to do what I usually do which is go out and start getting the jab on and everything else follows after the jab,” he states.

“I’m going to keep controlled pressure on him and I think he’ll fold from the middle of the fight onwards.

“There’s only so much you can take. In the last fight the jab was breaking him down from round one. I started landing the jab on his nose and the top of his eye socket so his eye was busted up and his nose was shattered so he just decided not to come out after round five; he’s lucky he didn’t because I was just starting to find my range. 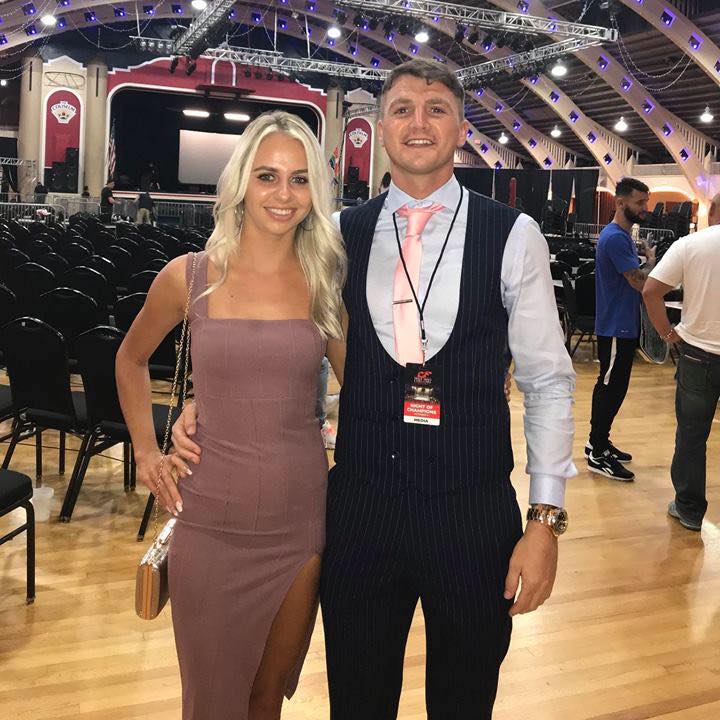 BY HIS SIDE… Connor with partner Eva Vipartaite.

"He was small and he was negative but he started to slow down and he was starting to get caught and that’s why he didn’t come back out.”

As the pictures show, and as is always the case, when at home, Coyle is supported by his former St. Joseph’s ABC coach Cahair Duffy. That close relationship remains, even with thousands of miles often between the two.

“When I come home Cahair always looks after me, keeps me in shape and always keeps my feet on the ground,” he admits. “If you didn’t have anybody looking after you, God knows where you would me.

"I wouldn’t be here either if it wasn’t for the likes of Cahair and the other coaches in the club, Liam McLaughlin and Kevin Duffy. It’s good to have them there to remind me of the wee gym I’ve come from at St. Joseph’s Boxing Club. Now a world title is on the horizon, and it’s a great journey we’ve all been on and we hope to continue it now by lifting a world title.”